On tax reform, Donald Trump gets it done—and takes a moment to gloat

Allen Abel in Washington on the tax bill and the pinnacle of Trump's presidency—a day without scandal, tweetstorm or tantrum 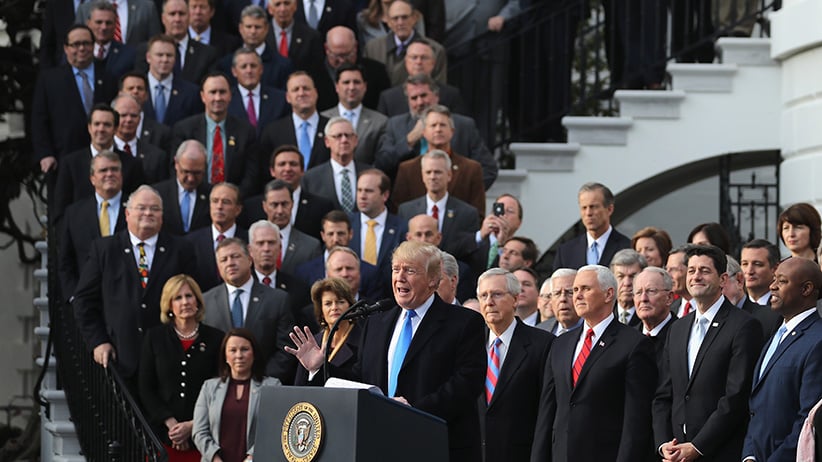 It was Wednesday afternoon at the White House, hours after the House of Representatives re-ratified The Donald’s big, beautiful tax cuts and re-repealed the requirement that every American purchase a health-insurance plan or pay a fine to Internal Revenue. With this, the entire obeisant Trumpian cabinet and dozens of congressmen and senators traipsed up Pennsylvania Avenue to perform the three prostrations and nine kowtows before their emperor, the same potentate whose personality and policies are detested in this favoured land by two folks out of every three.

“We got it done,” Donald Trump said, and this was, for a change, not a four-Pinocchio lie, but a truth verified by the placement of a conservative white male on the Supreme Court and a dozen more on lower panels; by the astonishingly rapid destruction of the Islamic State; by the trashing of the Trans-Pacific Partnership and the retreat from the Paris Climate Accord, and now by the deflation of corporate taxes and the evisceration of universal health care. As for the Democrats, the president crowed, “They like to complain but they don’t get it done, unfortunately.”

READ MORE: On business tax, Liberals need to catch up to the U.S.

This also was true. Forced by a procedural technicality to approve the Tax Cuts and Jobs Act for a second time in 24 hours, the Republican side of the House was all aye-aye-ayes on Wednesday while all anti-Trump eyes were on an opposition-party parley at which the member from Greenwich Village, Coney Island and the Upper West Side of Manhattan was named the ranking member of the judiciary committee, making Jerrold Nadler the man who will move Trump’s impeachment through the House should the Democrats retake the chamber in 2018.

“This may be the most shameful day in the history of Congress,” wailed Rep. Jackie Speier of California with typical liberal self-restraint as the enemy rammed the tax bill through.

“Republicans are giving the ultra-wealthy billions of dollars and putting coal in the stockings of everyone else,” said Lois Frankel, the representative for parts of Boca Raton, Pompano Beach, and West Palm Beach, but not Mar-a-Lago.

(If this were not theatrical enough, Reps. Pelosi, Frankel and Speier were joined at a Capitol news conference by eight other female Democrats, several of them brandishing lumps of real bitumen before being given baby wipes by a handy aide-de-camp to cleanse their carbonic hands when it was over.)

It had been exactly 11 months since inauguration day, the day Trump proclaimed that, “For too long, a small group in our nation’s capital has reaped the rewards of government while the people have borne the cost. Washington flourished, but the people did not share in its wealth … That all changes—starting right here, and right now.”

Eleven months later, the Washington Post—hardly Trump’s hallelujah chorus—condensed the bill thusly: “The plan would cut taxes in 2018 for the vast majority of households, with by far the largest benefits going to the wealthy.”

And Pelosi—so recently the leading lady of the slap-happy Chuck-(Schumer)-and-Nancy pastiche of bipartisan comity with the president, and with her own net worth estimated at more than $20 million—spoke lyrically of this being “the greatest country that ever existed in the history of the world.” Then, in her next breath, she accused the Republicans of “starving the beast—and who’s the beast? The American people!”

“America is back to winning again,” retorted Trump.

“This is a middle-class miracle and rocket fuel for the economy,” a senior White House official told a skeptical press corps at a briefing in mid-afternoon.

Trump, the official said, is “a really genius brander.”

“I figured sure there’d be balloons,” grimaced Sarah Huckabee Sanders, the press secretary, surveying the enemies of the people.

Then, in the flimsy sunshine of the shortest day of the year, to the South Lawn and a carnival of partisan self-congratulation: the military band tootling Christmas songs, the cabinet, Kellyanne, Ivanka, Jared and lesser minions in the audience, and a serpentine of Republican congressmen twined up the portico steps like mistletoe as if cast for a Democratic attack advertisement: “They cheered when Donald Trump raised your taxes. They applauded when he took your health care away…”

And Trump stood there in his long coat, beaming, at the pinnacle of his presidency, a day without scandal, tirade, tweetstorm or tantrum, though it still was only three o’clock in the afternoon when he spoke to the adoring assemblage, with nine hours still in play.

The president told his admirers that AT&T had just announced a thousand-dollar bonus for each of its 200,000 employees. This was not fake news, but evidence that at least one American mega-corporation actually will turn what Nancy Pelosi calls “the terrible tax bill” to the measurable, material benefit of workers and their families.

Five months ago, Mitch McConnell told an audience in Kentucky that “Our new president, of course, has not been in this line of work before. I think he had excessive expectations about how quickly things happen in the democratic process.”

“Get to work, Mitch,” the president responded. And this the Senate Majority Leader had done, convincing and cajoling and buying off his members to approve the most significant tax reform in a third of a century; bringing even the most recalcitrant Republicans into line when the chips were down; corralling all of last year’s Trump-whacked losers—Ted Cruz, Marco Rubio, Rand Paul, Lindsey Graham—on board for the final vote; getting even the senators who have announced their retirements in fits of anti-Trump pique to join the thumbnail-thin majority and give The Donald his biggest victory. So much for the so-called Republican civil war.

“This has been a year of extraordinary accomplishment for the Trump administration,” gargled Mitch McConnell on the South Lawn now, the taste of crow still on his lips.

“What a leader!” gushed Sen. Orrin Hatch of Utah.