Trump sounded capable at times of legitimate traditional debate, but grew more erratic as the night wore on. And Biden kept his head above water. 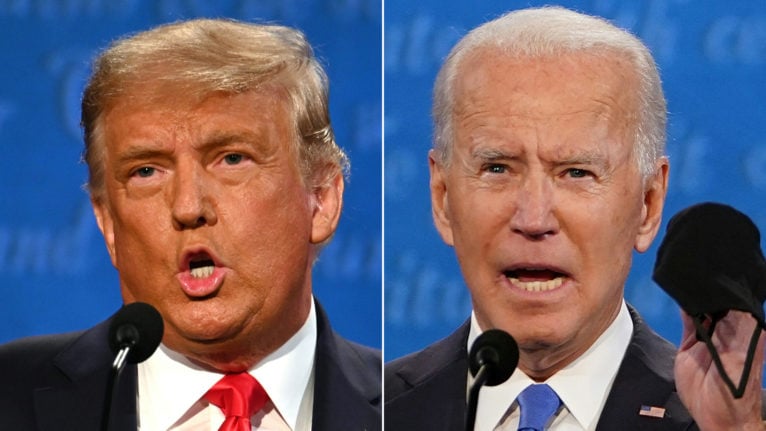 A dozen days before the United States election and we have just watched one of the last clangs in the excruciatingly-slow-moving car crash that has been the 2020 presidential campaign.

Feel free to take a breath of relief because you will not need to see President Donald Trump and former vice president Joe Biden on stage together again before Americans vote. Or maybe ever. Hallelu.

Those few remaining undecided voters won’t have been swayed much by the second and final  debate, although it was meatier, more coherent and more informative than the first. There was no clear winner or loser. Each septuagenarian played well to his base.

Happily, we didn’t need to watch and analyze a handshake. Unfortunately, no fly landed atop either’s head to give us the distraction we might’ve craved during an increasingly taxing 90 minutes. Instead we were left to watch and—whether entertained, bemused or depressed—reckon with the notion that these two men are the best America’s political establishment has to offer in a time of crisis.

On that cheery note, if you decided to skip it altogether (we can’t blame you) here’s what you missed.

Trump would prefer a nasty fight

Across the board, the general wisdom from pundits was that Trump should maybe tone it down a little. Just—you know—have a modicum of patience, a teensy bit of respect, a dash of decorum. A little less bloviating, a little more calm.

Well, colour us absolutely shocked that Trump lost sight of that advice as the night went on. Although he came out of the gate much milder than in his pre-coronavirus-diagnosis performance and maintained a higher level of decorum throughout, that newfound civility frayed into the evening.

By the 45-minute mark, his relatively cordial tone toward Welker—who firmly commanded the situation—became much more combative. By an hour in, he got bolder with his interruptions, and the debate began to look more like what we saw earlier this month.

A newly-introduced mute button, used sparingly, offered some reprieve from the incoherent crosstalk we might have expected. But to go uninterrupted wasn’t always to Trump’s benefit. It gave him what should’ve been  golden opportunities to go after Biden—and sometimes the silence did mean that his attacks took on the tenor of legitimate, traditional debate. But other times, the longer Trump went on by himself with no audience or feedback from his opponent, the more unhinged he came across.

Although many Americans have already voted, and few are at a loss for which candidate to support, every vote still counts. It was entirely possible that Biden, whose verbal snafus have gotten him into hot water in the past, would make a critical mistake on Thursday that could dominate the dying days of the campaign.

Biden’s answers were sometimes rambling, a word salad of talking points mostly remembered. But he also had moments that were snappy, direct and persuasive. He was deft in responding to Trump’s attacks. When Trump tried to raise the spectre of Bernie Sanders, he explained that he had beat him, and that Trump was actually running against Joe Biden.

Biden avoided a catastrophe, although he certainly overused the phrase “c’mon.” But several of his retorts could be misleading if taken out of context, like a sarcastic comment mocking Trump for being okay with teacher deaths.

He also managed to convey much of his policy platform—including with quite some detail on climate change. That came with some risk, and not because of Trump’s assertion that he knows far more about the climate and about, specifically, “wind.” In what the Trump campaign will inevitably use as attack fodder over the next 12 days, Biden confirmed that, as president, he would “transition” away from the oil industry over time—an issue important to a number of key states that Trump immediately recited by rote, including Pennsylvania and Texas.

Still, Trump’s main rebuttal to any of Biden’s present-day ideas was to ask why Biden didn’t “get it done” during his time as vice-president. The president rarely pivoted to his own ideas.

The president would like you to take a chill pill

Having now spent three days in hospital with COVID-19 himself, you’d think Trump might exhibit more sympathy with the more than 223,000 fellow Americans who have succumbed to the virus. OK, you might not think so, but you might hope so. Too bad for you.

A segment on the pandemic yielded attempts by Biden to outline his plan, including mandating masks and moving toward rapid testing, and boasts by Trump that things are actually pretty swell, and would’ve been worse under his opponent’s watch.

Trump downplayed the idea that Americans would still be dealing with the pandemic into 2022. The virus “will go away” and spikes and surges will “soon be gone,” Trump said, touting the drugs he was given while in hospital. “We’re learning to live with it,” Trump said.

“We’re learning to die with it,” Biden retorted.

The former veep suggested voters shouldn’t trust Trump’s assurances that a vaccine is on the way in “a matter of weeks,” because “this is the fellow that said it would be over by Easter,” and by summer, and “no serious scientist” was talking about a similar timeline. He said lockdowns can be necessary for public health. “We can’t lock ourselves up in a basement like Joe does,” Trump said. “He has this thing about living in the basement.”

Trump dodged a question about whether his rhetoric has contributed to racial strife by claiming that no president since Abraham Lincoln has done more for the Black community. He said he thought that Barack Obama, the first Black president of the United States, “didn’t even try” to do anything.

Biden disagreed, saying Trump has added fuel to every racist fire that ignited under his watch, and has shown no commitment to moving the needle toward equality. “This guy is a dog whistle about as big as a foghorn.”

On Trump’s attacks that Biden supported crime bills in the ‘80s and ‘90s that led to widespread incarceration on minor drug charges, Biden reiterated that the bills were a “mistake” and that nobody should ever go to jail because they have a drug problem.

When Biden challenged him on the fact he still hasn’t put out his tax returns—putting him out of step with other modern presidents—Trump said, “I’m going to release them as soon as I can.” About a New York Times report that he had paid shockingly low tax bills in 2016 and 2017, Trump said he asked his accountants what happened and concluded that: “I already prepaid it. Nobody told me that.”