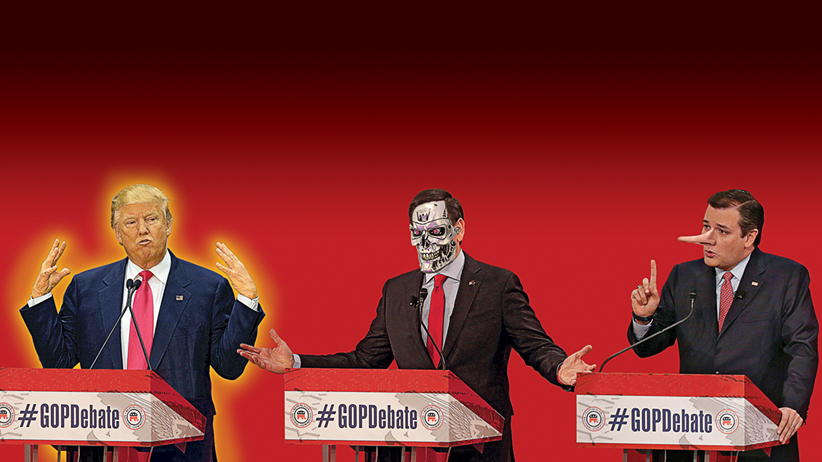 Forget about Oscar-nominated movies and peak TV—the best entertainment of this, or any, year is the race for the Republican presidential nomination. It’s got drama, comedy, tragedy and yelling (mostly yelling). Also, did I mention everyone is nuts? Think of it as a phenomenon similar to those newly discovered gravitational waves: Long after we’re gone, powerful ripples of crazy will still be spreading across the universe.

Let’s get you up to date. Remember Ted Cruz? He’s the one with the voice of Marvin the Martian and the world view of Yosemite Sam. During a recent debate, Marco Rubio called Cruz a liar. Then Donald Trump called Cruz “the single biggest liar”—because to Trump, everything is always the single biggest anything. Cruz later called Rubio and Trump whiners. Meanwhile, Jeb Bush called his mom and asked if he could stop trying to be president now.

Things have been tough for Rubio since Iowa, where he gave a memorable victory speech (it was memorable primarily because he finished third). A political algorithm in a suit, Rubio has been assailed for repeating his talking points, word for word, time after time, without care as to whether the message fits the context. Here’s a typical exchange:

Speaker box: “Um, I just asked if you want fries with that.”

To his credit, Mr. Robot got through the last debate without falling into a programming loop, which is good news for his campaign and terrible news for humanity. This means it’s learning. Soon it will become self-aware and then there’s no stopping the Rubio-Skynet ticket.

Anyway, all that stuff about who’s the lyingest liar? Turns out that was the classy part of the debate. Later on, Trump defended having referred to Cruz as a “pussy”—saying it wasn’t so bad because, FYI, Bush had publicly threatened to “take off his pants and moon everybody.” It was around this time that the moderator interjected: “We’re in danger of driving this into the dirt.” In danger? The Republican race is a tire fire wrapped in a train wreck inside The Adventures of Pluto Nash. We’re watching as one of the world’s most successful political parties goes Dumpster diving for a leader.

The news networks are struggling to adapt. They still cover the race as though it’s a normal campaign. It’s not. We’ve passed into some next-level Narnia-talking-animal strangeness. Still, every night you can find on CNN a pundit conﬁdently predicting Donald Trump’s demise. But Trump never demises! Everything that should kill him politically only makes him stronger. And, weirdly, oranger.

Let’s engage in a brief thought experiment: How would Donald Trump describe his immigration plan if he were eight years old? He’d probably say something like, “I am the strongest on the borders and I will build a wall, and it will be a real wall.” That sounds like the boast of an eight-year-old, right? It also happens to be the exact words Trump used. Let us savour the fact a presidential candidate felt the need to emphasize his wall would be neither metaphorical nor imaginary. It’s a savvy move: Many Americans still feel burned by the failed promises of President Pink Floyd.

I don’t mean to suggest this entire race is without upside. For instance, Ben Carson’s achievements as a neurosurgeon seem even more impressive now that we know he spends 40 per cent of his waking hours with his eyes closed. (My favourite line from the campaign remains the following declaration from Carson, a man who is trying to become president: “I’m not a politician, and I’m never going to become a politician.” Uh, yeah, that’s probably a safe bet now, Ben.)

Kasich, who seems like a reasonable man and therefore doesn’t have a chance, pleaded to voters: “The world is desperate for leadership. The world needs us.” John, on behalf of everyone in the world who’s seen what the Republicans have to offer, let me assure you: We’re good.