Roy Moore preaches to his choir 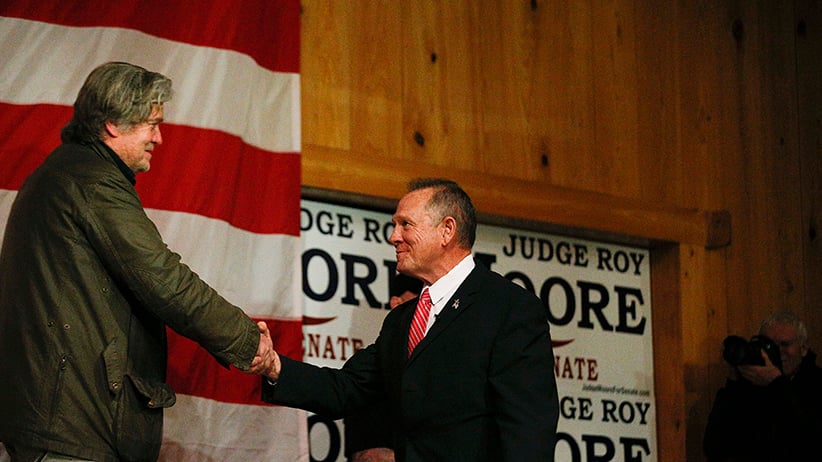 Away in a manger—actually, a dirt-and-mulch-floored arena in the horsey suburbs of Mobile, Alabama—we are waiting for Judge Roy Moore. We are reporters and camera crews in our dozens, dispatched at our bosses’ expense to corral this brazen Solomon in the hope that some new scandal will explode while we are here, or that he will admit to old ones, if scandals indeed there were.

We are men in overalls and women in cardigans, a musclebound posse of Bikers For Trump, Tea Party-goers dressed all in red, white, and blue, and a handful of protesters costumed as Margaret Atwood’s handmaids who gently are showed the door before the show even starts.

Mostly, we are the white Christian voters of South Alabama, hundreds out on a stormy Gulf Coast evening, drawn in tribal solidarity to hail and hear and defend Judge Roy Moore, and to affirm that, whatever he was, if he was, when he was, and why he was, Roy Moore no longer is.

Judge Roy Moore, national cynosure and imperfect sinner—as are we all—is one week away from either being elected to the United States Senate from the Heart of Dixie, or being denied that seat on the basis not of his pro-Trump policies and anti-abortion principles, which adhere to those of the majority of the state’s overwhelmingly caucasian, Republican electorate, but for deeds that he says he didn’t do, back in the 1970s.

Those purported acts, of course, were the wooing and tracking of girls half his age around the malls and meadows of Gadsden, Alabama, and the alleged forcing of one 14-year-old to fondle his private parts. Judge Moore, already idolized by many Alabamians for his refusal to remove a granite megalith etched with the Ten Commandments from his courthouse, and for refusing to accept the edict from Washington that men and men and women and women are by law free to marry each other, should they choose, has denied knowing the girls, touching the girls, or making any of them touch him.

The president of the United States has endorsed Roy Moore.

Some recent surveys have shown Moore trailing Democrat Doug Jones by a statistically insignificant margin. (No Democrat has won a Senate seat from Sweet Home Alabama in a quarter-century.) A CBS News poll released on Dec. 3 found that that 77 per cent of registered Republicans here believe that the former chief justice of the state’s Supreme Court is innocent of all accusations of sexual misconduct.

Eighty-eight per cent of respondents blamed “the media” for persecuting the 70-year-old Moore, who has been married to the same woman for more than 30 years, while 92 per cent blamed “the Democrats,” making a total of 180 per cent of Alabamians who think he didn’t do nothing wrong.

“How do we know these accusations are not lies?” argues a woman named Ann Eubank, the alpha female of a group that calls itself the Alabama Legislative Watchdogs, while she awaits the evening’s program. “It is a ‘he said, she said’ from forty years ago. If allegations alone were enough reason to step down, the halls of Congress would be empty.”

Eager for Judge Roy Moore to speak his piece and tread the turf of Oak Hollow Farm, Ms. Eubank notes that, just 10 years ago, she was working as an accountant with zero interest in politics. But then George W. Bush, in her words, “bailed out the big banks when he should have just let them fail,” and then came the unmentionable Barack Obama, and the Tea Party, and Donald J. Trump, and this special election, “and if you want to call me crazy, that’s okay.”

“This is so much bigger than Judge Roy Moore,” the watchdog growls. “This is the future of our country!”

Two warmup acts precede the candidate’s appearance. The first is a bluegrass band whose repertoire includes such standards as I’ll Fly Away, plus a tribute to Judge Moore’s self-sacrificial adherence to the Ten Commandments—or at least to their chiselled stone embodiment—that includes the words:

Or a pretty piece of art.

But you can’t take the Ten Commandments

Out of the Bible or my heart.

The other forerunner is Steve Bannon, in the flesh, the great rebel-rouser and sculptor of the Donald Trump presidency, avatar of, and profiteer from, the downtrodden rural white man and woman, fresh off a private jet from Washington, D.C., for a brief sojourn in the backwoods.

“The day of just taking it silently is over,” Steve Bannon—tousled, meandering, vitriolic, self-satisfied, smug, and slanderous—tells his minions.

Such is the scene at the show barn: Bannon flogging the dead horse Willard “Mitt” Romney, the Clintons (still!), Leader Mitch McConnell, Sen. Jeff Flake, et alia; the patriots in the audience shouting out names for their mastermind to blaspheme (“John McCain!” “Paul Ryan!”); the Deplorables joyfully enumerating strangers they never have met but whom they despise because Steve Bannon tells them to hate them.

Of former presidential candidate Romney, who avoided military service while proselytizing in Europe on behalf of The Church of Jesus Christ of Latter-Day Saints, and whose five sons never have worn a uniform other than a three-piece suit, Steve Bannon, a former naval officer snarls, “Roy Moore has more integrity in his pinky finger than your entire family has.”

Of next Tuesday’s election, Steve Bannon says, “this is a referendum on the Donald Trump program or the Hillary Clinton program.”

Of the accusations that Judge Moore is—or was—a creepy skirt-chaser at best and a criminal pedophile at worst, Steve Bannon says, “This whole thing was a set-up. This thing was weaponized.”

Now, Roy Moore, seemingly not as personally weaponized this time as he was when he pulled a little silver pistol from his clothing back in September, when he and Steve Bannon last played this same duet of blustery bluegrass in this same equestrian barn, appears on stage with his wife and their handsome son.

A crisp and polished speaker in his eighth campaign for public office, Moore reads from a sheaf of large-print notes and invokes the Founding Fathers and vows that he will, as it is written in the Book of Ephesians, “Put on the full armour of God, that you can take your stand against the devil’s schemes.”

(Yet it also is written in 1 Timothy 3:2, in the New Testament to which Roy Moore so defiantly adheres, “A bishop then must be blameless, the husband of one wife, vigilant, sober, of good behaviour, given to hospitality, apt to teach.”)

Satan’s emissaries today, Moore says, include the arch-liberal billionaire George Soros; the trans-gender citizens who, unlike Mitt Romney and Donald Trump, desire to serve in their country’s armed forces, just as Roy Moore served in Vietnam; and, of course, “they”—whoever they are—who “don’t want me up there in Washington because I won’t follow along, and that’s why they don’t want me.”

“If you knew what kind of battle I’ve been fighting,” Roy Moore sighs, “you wouldn’t want to be up here.”

Taking no questions, confessing no crimes, the chief justice has not come here to change minds, for these minds are as inflexible as granite, and they already are his.

“I’ve been called many names,” Moore says. “I’ve been called uneducated, out of touch, racist merely for saying that we need to crack down on illegal immigrants, a bigot because I stood against same-sex marriage, and finally, what hurts the most, is I’ve been called foolish for believing in God.”

“Make Christianity great again!” someone shouts from the crowd.