Roy Moore's Alabama faithful pledge their allegiance near the pulpit 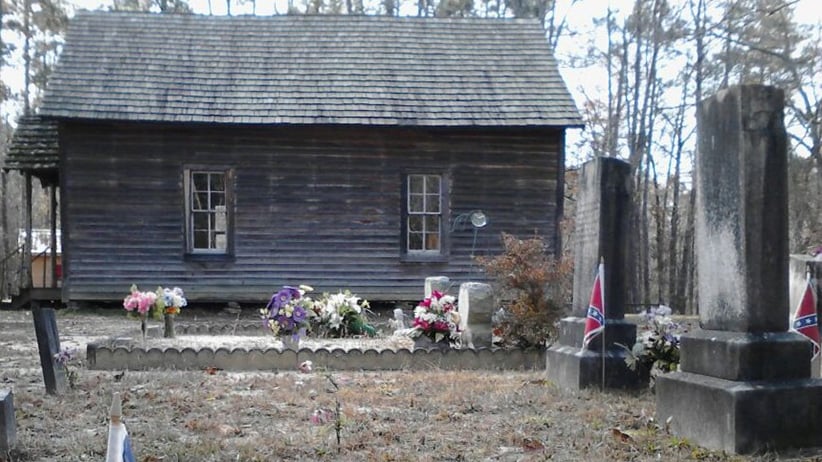 A long, searching drive down Alabama’s Hallelujah Trail begins in a clapboard, 1850s church beneath the brown-leaved oaks of Winston County, where a third of a hundred white folks loudly sing Away in a Manger with unabashed piety while their kinfolk sleep forever outside.

This is historic, unadorned Corinth Church, tucked along a lonely road near the village of Double Springs, just after sunrise on a clear December Sunday: the worshippers, most of them past sixty, sitting in their pinewood pews on home-stitched granny-square Afghans; the rusted stove in the corner and the American flag coiled behind it; the testimonial by a former police officer and factory worker in a plain black suit who says that “We can’t do ANYTHING that’d make God say, ‘I don’t like you.’ His mercy is everlasting.”

Beyond the north wall of the rustic chapel—one of 32 stops on the officially designated North Alabama Hallelujah Trail of Sacred Places—a tiny graveyard enfolds the stones of generations of Winston County settlers, some of them decorated with the Confederate battle flags they marched and fought and died for, a century and a half ago.

READ MORE: Roy Moore and the hypocrisy of America’s evangelicals

“This is my great-great-grandfather,” one man says above a Rebel’s tomb. It is the grave of a soldier named Robert Alexander Hill, Company F, 16th Alabama infantry, a survivor of the War of Northern Aggression—as they call it down here—who trudged home from the battle to a broken land and lived well into his eighties, his earthly body intact save for the thumb the Yankees shot off at Shiloh. The weathered inscription, barely legible in the slanting sunlight, reads:

A soldier hero to the south

Loyal to his country and his father

The church is bare-walled except for fresh Christmas wreaths and oil lamps in niches, but the parishioners are hardly barefoot; nearly everyone a wanderer meets at Corinth Church is a college graduate. On Dec. 12, these deeply rooted Christians—and the rest of Sweet Home Alabama—will have an especial choice to make in a special election to fill a vacancy in the United States Senate in distant, damned, dissolute Washington; a contest that will test their loyalty, their fervency, and their faith.

The opposing candidates are, of course, a Democrat and a Republican, both white males over sixty, but this is not the reason why so much attention has come this season to the self-acclaimed Heart of Dixie. In an ordinary year, the Republican would be a shoo-in; Alabama hasn’t sent a Democrat to the Senate in more than 25 years, and Donald Trump carried the state in a landslide only 13 months ago. But the Republican, this time, is Judge Roy Moore, the histrionic, cowboy-hatted, Christian crusader who twice was removed from the state’s highest court for refusing to obey orders from above—rather than from Above—and who recently has been accused of stalking and courting teenaged girls when he was a Vietnam veteran and professional pugilist in his thirties, and of once compelling a 14-year-old girl to touch his penis through his boxers.

None of these 40-year-old implications of sexual impropriety (at minimum, or criminal sexual assault at worst) has been proven in an Earthly courtroom. The Senate campaign is Moore’s eighth run for public office, yet none of Moore’s several accusers ever has come forward before. In fact, all were silent until Moore won the state’s Republican primary in September.

Judge Roy Moore has been condemned by his own party’s leadership in Washington, he has been threatened with summary expulsion should he carry next Tuesday’s vote, and he has been branded an embarrassment to Alabama by his opponent, Doug Jones, a former federal prosecutor from Birmingham. Yet the 45th president, who never is too shy to cast the first stone, has endorsed Moore’s candidacy and denied his accusers de facto, proclaiming that even a Republican sinner in the Senate would be preferable to a liberal saint.

“I know Roy Moore,” says the man in the plain black suit now, in the Corinth Church. In front of him, the congregation harkens in pine-board pews, and a baby boy softly mewls. There is no altar, no communion, no chanting, no liturgy, no Bible thumping, no priestly robes, no choir except the assembled citizens. And no snake handling, if this is what you think rural Alabama is.

From the weathered hymnal, the penitents sing In The Garden, written in 1912: “He speaks, and the sound of His voice is so sweet, the birds hush their singing . . .”

Prayers are said for an infant born with his inner organs outside his body, for a woman who has undergone a tracheotomy, for the folks who lost their jobs in a fire at the sawmill, for two schoolchildren whose mom went to jail and who were taken in by the nurse.

“I am very far from a perfect person,” the layman testifies. “I’m a sinner.” And he recalls how, when he erred as a young man, his father “would take a switch and say, ‘You need to rethink that, and do it better.’ ”

He is J.D. Snoddy, a graduate of the University of Alabama, former schoolteacher, former mobile-home assembly worker, former cop, now the duly elected Circuit Clerk of Court for Winston County, where Donald J. Trump secured a larger tranche of the popular vote–94 per cent–than in any other county in the country.

“Our nation should praise God every day for the country that we have,” Mr. Snoddy tells the congregation. “We should praise God for our Founding Fathers. We should remember how, during the writing of the Declaration of Independence, Benjamin Franklin said, ‘We need to take a break and have a season of prayer.’ And how a man asked, ‘How shall I know George Washington?’ And he was told, ‘When they pray, he is the one who kneels down.’ ”

J. D. Snoddy has known and worked with Judge Roy Moore during the latter’s 16 intermittent years of service as Chief Justice of the Alabama Supreme Court. He will vote for Moore come Tuesday. And, just so you know, J. D. Snoddy’s own grandmother was married when she was 14 years old.

“I’ll vote for him because of the fact that those accusations are something that happened 40 years ago,” Mr. Snoddy tells a reporter. “I don’t know the kind of person Roy Moore was 40 years ago, because I didn’t know him back then. I think that people who bring things up after that long a time when there were opportunities to bring it up before, I’m suspicious of that.

Winston may be the Right-est, whitest county in Alabama—there were only 54 African-Americans enumerated during a recent census—but even here an opposing voice or two can be heard. In the congregation this morning is a land surveyor named Gary White, a graduate of the University of Alabama, and—this is as rare in Double Springs as sightings of flamingos—not a Republican.

“I’d say Moore is what I’d call a loose cannon,” Mr. White says out in the little cemetery, where his great-great-grandfather, the thumb-less R. A. Hill, is interred. “Although I do agree with some of the values and beliefs that he expresses, the way he goes about achieving his goals is wrong.

“I’ve followed Doug Jones and I have to admit that when he was a federal prosecutor, there were some things that HE did that I didn’t like, too.”

“Do you believe Roy Moore’s accusers?” Mr. White is asked.

“Yes,” he replies. “And I think there are more things about Roy Moore that haven’t come out yet. I’m suspicious why he hasn’t presented more of his military background than he has. I did some research and it appears that his men didn’t like him very much when he was in Vietnam. He put sandbags under his bed so they couldn’t roll a grenade under there.”

(Uncovering this episode doesn’t require much perspicacity—Moore’s fear of being “fragged” by his own men while serving as a commander of military police in Da Nang is mentioned in his autobiography.)

“As far as dating teenaged girls, I don’t see anything wrong with that,” says Gary White. “My great-grandmother was 13 when she got married. My great-grandfather was 26 and his first wife had died. My grandmother had gone to his first wedding and sat on his lap! But they got MARRIED—that’s the difference.”

That the women came forward so latterly, White reasons, “I think it’s more the timing of what’s happening in society than the timing of the election. All those other things that are happening in Hollywood, I think that’s why they came forward after so many years.” And the special election, he avers, is not about Donald Trump per se: “He’s just a spoiled rich kid who thinks things are supposed to be HIS way. If it’s his idea, it’s the right idea.”

What the election is about, says Gary White of Winston County, is about Roy Moore and Doug Jones, and about the thick glue of partisanship that binds men and women and parents and children here for life. There are far more Republicans than Democrats in Alabama, and that bodes well when the votes are counted, even for such a man as Judge Roy Moore.

“The only time my daddy ever sat me down wasn’t when I was a teenager, it was when I got registered to vote for the first time,” Gary White recalls. “He gave me a little model of Franklin D. Roosevelt’s ‘little White House’ in Warm Springs, Georgia, and he said, ‘Son, FDR saved this country. He was a Democrat, and I am a Democrat, and you’re going to be a Democrat, too.’ ”

Even the segregationist governor George Wallace learned and adapted and grew, Gary White says: “He changed to meet the requirements of the voting public, and that’s what a political representative of the people should do.”

“Is that what Roy Moore should do?” the great-great-grandson of the Confederacy is asked, outside the tiny chapel in the tall oak forest. In the distance, a rifle shot; at Christmas-time in Alabama, there is joy to the world, but woe to the deer.

“If he confessed, that would help,” says the surveyor. “Or if he even EXPLAINED.”