The White House has a communications problem. But it goes far beyond that. 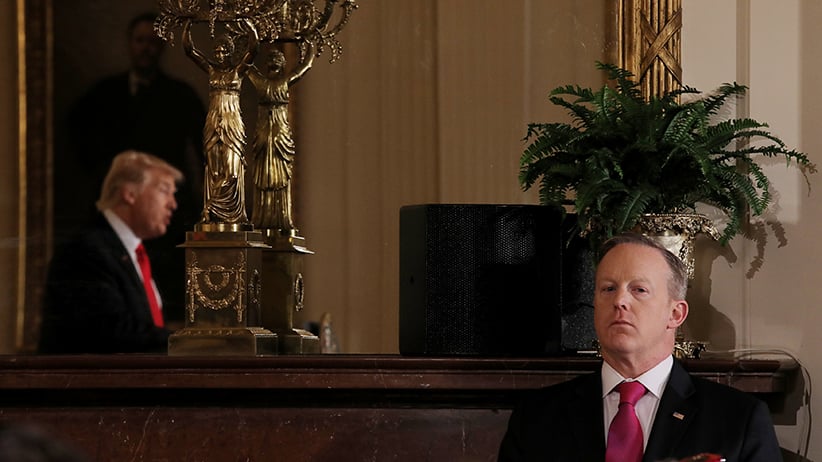 Serving as a political spokesperson implies a streak of masochism; no one can survive getting hit as often as flacks do without liking it a bit.

What, then, to make of a mouthpiece who keeps showing up for duty with his hands tied behind his back and a liar’s fist up his backside? This describes the state of play at the current White House, where President Donald J. Trump appears to have an unending supply of zip ties and a greasy aversion to telling the truth.

That White House Press Secretary Sean Spicer and his communications team are still around means they’re a) stupid; b) gutless; or c) so disoriented they don’t realize they’re the useful idiots.

Looking back, it’s clear it was always going to come to this. The fact that one of Spicer’s first acts in his role was to berate reporters for accurately reporting the size of Trump’s inauguration crowd told us all we needed to know about the President and the inability of his staff to push back on him. It was all so pointless; there would have been absolutely no shame in admitting that the old white Republican’s ceremony was smaller than the young Black Democrat’s.

By lying about the easily verifiable, the White House guaranteed doubt on material that is harder to source. With all of the current coming and going on Russia, I’ll guarantee you Spicer wishes he had some of that wasted credibility back.

We’ve now come to the point where few outside of the Fox faithful believes a word out of the President’s mouth, and even fewer in the White House briefing room believe Spicer or his deputies. This corrosion of trust was absolutely part of the Trump plan (“fake news!”), but it has rendered his press team as useless as a screen door on a submarine.

MORE: What Comey’s firing reveals about the Trump White House

The only beauty of the investigation into the Trump campaign’s ties to Russia and the subsequent firing of FBI Director James Comey is that it lays to rest the idea this is about a lying press. And, somewhat paradoxically, all you have to do is take Donald Trump’s word for it.

There is now an established rhythm on the Russian disclosures: a scandalous story pinned on anonymous sources goes to print; the Trump White House and its surrogates spend the day vociferously denying it; and then the President himself undoes the denial and confirms the original reporting, either via an interview or his half-cocked Twitter bazooka.

Trump has now done it on the reasons for Comey’s sacking and the sharing of sensitive intelligence with the Russian foreign minister and ambassador. If we wait a second, he might just do it on asking Comey to back off the bureau’s investigation of Michael Flynn.

MORE: The beginning of the end for Donald Trump?

Having been armed myself with a flimsy explanation and sent out to do battle against a bloodthirsty press (hello, Mike Duffy!), I can tell you there is no worse feeling than fighting the good fight only to have your boss undercut you after you’ve been cut to pieces. Sometimes it happens—because of necessity—but it can’t become a repeat occurrence.

How many times is Sean Spicer willing to be undercut by the boss? Ten? Twenty? Or will he surrender only to the final ignominy of being fired by the least truthful and competent President of all time?

To be clear, this isn’t about bringing in someone “better” than Spicer to do the job. There is no one on earth who can buff a habitual liar. As long as Lyin’ Donald Trump is in the (apparently sodium pentathol-free) White House there is no getting out from under the chaos.

If Spicer can’t march into the Oval Office and get the level of truth out of his boss that he needs to do his job, then he should quit. The same goes for all of Trump’s senior enablers in the West Wing.

And while they can’t be expected to quit, Republicans in Congress need to hold the President to a higher standard than the impossibly low one they’ve apparently set. They should be celebrating victories over the Democrat minorities in the House and Senate, not spending time wiping the President’s mess off their shoes.

SATIRE: Scott Feschuk on what comes next, after the Russia revelations

Republicans need to realize the first hundred days of Trump aren’t past, they’re prologue. Someone in the Republican Party—staff or legislator—will have to demonstrate courage to stand up to Trump, and then explain why they did so to the Trump base.

Given the lemming-like manner in which Sean Spicer keeps reporting for duty to transmit the president’s inaccuracies and insecurities, we know that person cannot, and will not, be him.

It’s only right that Melissa McCarthy plays the fictional Spicer on Saturday Night Live—something that, it is said, infuriates Trump. After all, the real Spicer doesn’t have balls either.