Spitting-mad Trump supporters are not going away

Image of the Week: Laugh, cringe or succumb to outrage, there's no avoiding the outgoing president's COVID-denying true believers 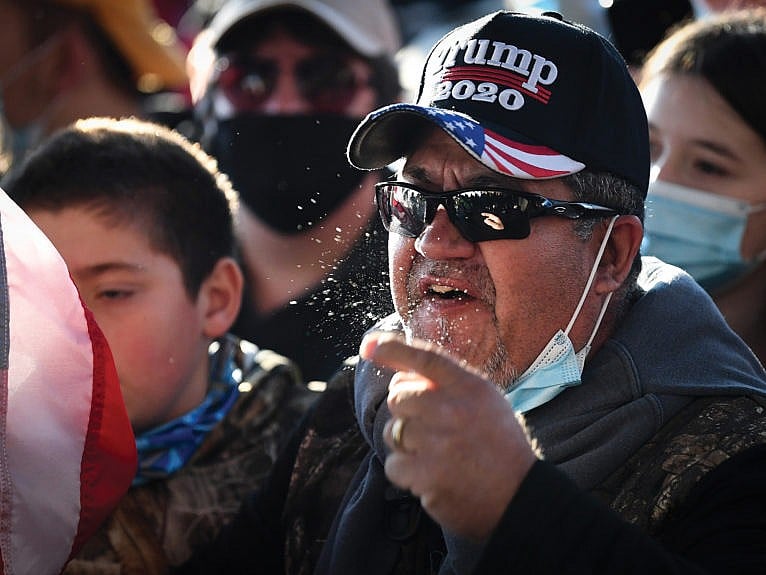 A Trump supporter yells at counter-protesters outside of the U.S. Supreme Court during the Million MAGA March in Washington on Saturday. (Caroline Brehman/CQ-Roll Call/Getty Images)

Some pictures say a thousand words. Others are much more succinct. Regardless of the nuance this image may lack, the baseness of it—an angry man yelling, saliva unchecked by a limp mask uselessly hugging his goatee; a “Trump 2020” cap atop dark shades; a living, breathing, shouting stereotype of right-wing Twitter trolls—speaks for itself. It was taken at this weekend’s Million MAGA March (“million” in name only; the real number was closer to several thousand), a dying-breath rally of support for the outgoing president, which might go down in history as one of the largest super-spreader events of the season if any of the attendees bothered to get tested. Considering how many of them proclaimed to reporters their disbelief in the severity of a virus that has infected one million Americans in the past week alone, it’s unlikely they will. But it would be presumptuous to laugh off the MAGA hatters entirely: events like these are great way to build email lists, solicit donations and consolidate a base. They’re not going away. The rallies will continue. Their political clout, with or without Donald Trump at the helm, is only going to grow.