The incumbent keeps saying he did more in 47 months. As ever, the factual record differs. 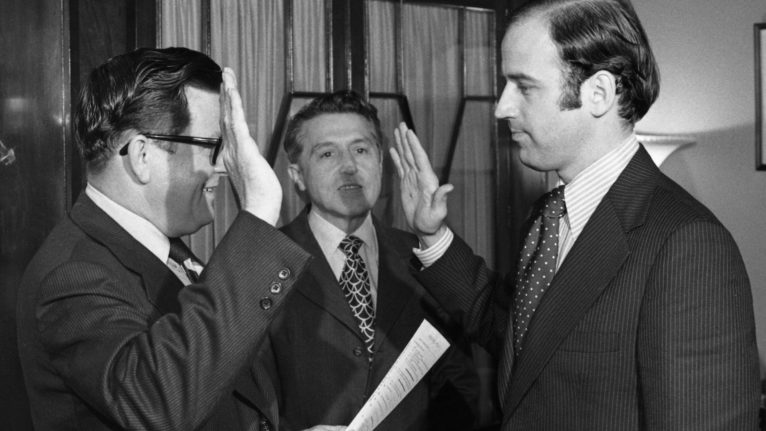 Biden taking his oath after his first election to the U.S. Senate in 1972. (Bettmann Archive/Getty Images)

One of Donald Trump’s catchiest boasts in his campaign against Joe Biden is also his most plainly innumerate: “I did more in 47 months as president than Joe Biden did in 47 years.”  He first said it in September, when in fact barely 44 months had elapsed since he was sworn in as president. (The 47th will pass after the election.)

Beyond bad math, it’s a terribly subjective claim, and an asymmetrical one. A president has more power than a senator, the position Biden held for 36 of those years starting with his first victory in 1972; or a vice-president, which Biden was under Barack Obama for eight; and certainly can get more done than the private citizen Biden has been for the last three years.

Like many of Trump’s brags, it seems devoid of substance while failing to reckon with Biden’s decades of political achievement. Yet it may be effective at getting some voters to sincerely ask: What did Biden do during all that time near the top of America’s political power structure—through five different decades and eight presidents, from Richard Nixon to Obama?

Unsurprisingly, there’s a whole lot on Joe Biden’s side of this imaginary scale—for better and worse, depending on your outlook:

Trump makes much of the fact he’s appointed three conservatives to the Supreme Court. But presidents merely nominate justices; senators confirm them. Over 36 years in the upper house, Biden voted to confirm six top court justices from both parties—ranging from liberal icon Ruth Bader Ginsburg to conservative lion Antonin Scalia. Biden voted “nay” to five others, all Republicans, including current Chief Justice John Roberts, Clarence Thomas and Samuel Alito. In fact, the only current justice who got Biden’s confirmation vote is Stephen Breyer, a Bill Clinton pick. He promoted Obama’s two nominees—Sonia Sotomayor and Elena Kagan—but both were confirmed by comfortable margins in a Democrat-dominated chamber.

He chaired the Senate Judiciary Committee from 1987 to 1995, which means he led the confirmation process for six justices. Most controversial was his mistreatment of Anita Hill’s sexual harassment allegations at the Thomas confirmation hearing.

The recovery, and the tax yo-yo

When the Obama administration was left to pick up the pieces after 2008’s economic crash, Obama gave Biden a key role: oversight of a roughly $800-billion stimulus package, or “Sheriff Joe” in the president’s terms. Trump proclaimed an Infrastructure Week; Biden’s big spend stretched on for years. A minimal amount of that gusher was found to have been wasted or fraudulently misused.

On taxes, he has cut—and hiked—far more than Trump. He backed Ronald Reagan’s massive tax cut in 1981 (it cut all income tax rates, including the top bracket, from 70 per cent to 50). He voted against those 1990 tax hikes that sullied George H.W. Bush’s “read my lips” pledge. He backed Bill Clinton’s tax hikes on the wealthy and his later cuts for families and small businesses, and against the deep rate cuts George W. Bush brought in.

Later, he’d help extend the Bush tax cuts as vice-president, leaning on his negotiations and rapport with Republican Senate Leader Mitch McConnell; though an Obama bill hiked the top bracket rates again in 2012.

Since Delaware is America’s financial services state, he developed a rap as being too friendly with banks. He drew liberal ire for a 2005 law that made it harder for consumers and students to get protection in bankruptcy, but he’s pivoted away from the sector since the 2008 meltdown.

They don’t call it Bidencare, but..

The most famous bit of lore around Biden and Obamacare came at the bill’s 2010 signing, when microphones picked up the veep telling the prez: “This is a big f—ing deal.” And Biden did help navigate the Affordable Care Act through Congress—and pushed Pennsylvania Senator Arlen Specter, then a Republican, to change parties.

But it’s worth noting that he had little hand in crafting the largest U.S. health-care overhaul in a half-century. It’s said Biden was initially wary of Obama pushing for major health reform, and advised him to focus on jobs.

Biden won seven straight Senate elections in Delaware, which has become a Democrat stronghold. But in 1972, it was no blue state; both senators were Republican, and Richard Nixon carried the presidential vote that year in Delaware by a 20-point margin. Biden defeated a two-term incumbent, in part by—cue foreshadowing—mocking his opponent’s advanced age (62) compared to his own youth (29). The year he won his final Senate victory, 2008, was also when he first won on Obama’s presidential ticket. Add Biden’s 1970 win as a councillor in New Castle County, Del., and he’s a perfect 10-0 in general elections. Polls suggest Trump’s 1-0 record is in bigger trouble.

Biden has a much lousier record when it comes to presidential bids. He was a dud in the 1988 and 2008 Democratic presidential primaries, dropping out early after a plagiarism scandal and a dismal performance in the Iowa caucuses, respectively.

The best-known bill to bear the current presidential candidate’s name (unofficially) is the 1994 Biden Crime Bill. At the time, it was popular among police organizations and the Congressional Black Caucus alike; it came as the Clinton administration vowed to get tough on a violent crime wave and the rise of crack cocaine. It curbed crime rates, but its harsher prison penalties exacted a terrible cost for mainly Black and Latino men. Biden would come to express regret about parts of the wide-ranging bill, but not measures against assault weapon ownership or the Violence Against Women Act that addressed domestic violence and rape.

The National Rifle Association has hailed Trump as a defender of gun rights, but mostly because he resisted any serious control measures after a spate of mass shootings. Nothing Trump did, though, expanded gun rights as much as the NRA-friendly 1986 bill that Biden supported that curtailed federal oversight; made it easier for ex-convicts to get weapons; created a background-check loophole for gun shows and gutted a law passed in wake of the Kennedy assassination.

Then came the 1990s. Senator Biden voted for a 10-year ban on semi-automatic weapons and a major background check bill. By the time he left Senate, NRA gave him a seven per cent rating.

After 26 children and staff were shot dead at Sandy Hook elementary school in 2012, Obama put Biden in charge of a gun-violence task force. The White House took some minor executive actions, but the vice-president couldn’t persuade senators to make any changes.

Biden at war (or sometimes not)

It’s true that Joe Biden had varying positions on U.S. war in Iraq—against it, then for it, then against it again—but that’s accounting for two different military incursions. He voted alongside other Democrats against authorizing the historically popular 1991 Gulf War. But he supported the 2003 invasion, and like many, later regretted it.

RELATED: What if Donald Trump loses?

He was a longtime member of the Senate Foreign Relations Committee, the top Democrat on the panel for 12 years and its chair for four. He was an early advocate for U.S. action against Serbian aggression in 1992 in Bosnia; he’s accused of overstating his influence on U.S. presidents, but during a 1993 meeting Biden secured with Slobodan Milosevic, he called the Serb leader a “damned war criminal.” When tensions erupted in nearby Kosovo, he co-sponsored, with Republican John McCain, a 1999 resolution that authorized then-president Bill Clinton to use “all necessary force,” including ground troops, to win the NATO-led war. Biden also helped rally Democrats behind George W. Bush’s war in Afghanistan after the 9/11 attacks.

He turned dovish in Obama’s White House; his president has said Biden tended to be among his most reluctant advisors to advocate force. He expressed caution about the operation in Pakistan to kill Osama bin Laden.

Earlier in his Senate tenure, nuclear disarmament was a focus. In 1979, Biden met with the Soviet foreign minister as then-president Jimmy Carter’s envoy, and negotiated treaty amendments. In 2010, he was Obama’s point man to ensure the New START nuclear control treaty passed and got Senate ratification.

Green before its day

In 1986, Biden sponsored the Global Climate Protection Act, which called for a presidential task force and to get the issue onto the agenda of then-president Ronald Reagan’s talks with the Soviet Union. This was after a fellow senator named Al Gore got interested in the problem, but before the landmark testimony on climate change by NASA scientist James Hansen. “Even a small rise in temperature could disrupt the entire complicated environment that has nurtured life as we know it,” Biden told the Senate.

It died in the Senate, but a year later it survived as an amendment in a funding bill that Reagan signed.

Later, as vice-president, he led on administering $90 billion in stimulus funds on clean-energy programs, including home retrofits, solar power and high-speed rail. He’s boasted that his meetings with President Xi Jinping helped bring China into the Paris climate accord (from which Trump withdrew the U.S.), but that seems to be an exaggeration.