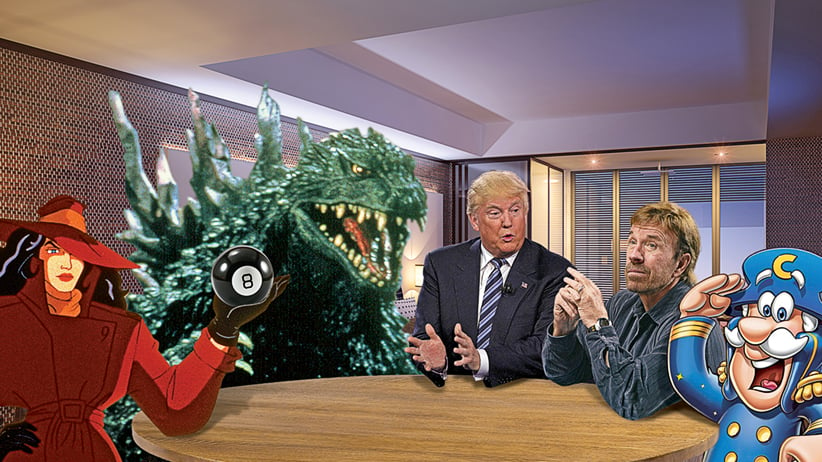 Donald Trump recently assembled a team of “foreign policy advisers” at his Washington hotel and, well, the photo above nails how many of us imagine the meeting. Not pictured is Dora the Explorer, who got roughed up pretty bad when she couldn’t produce a green card.

But hang on! Trump insists his advisory group is comprised of “top people.” They got together. They explored the pressing global issues of our time. And according to the Republican frontrunner, they emerged united in a single belief: Donald J. Trump is one smart cookie.

“Define that feel,” the reporter replied.

Trump: “I will tell you what the feel is.”

Let us now explore the Trump Feel by looking at the candidate’s view of America’s foreign policy challenges. His words are in bold.

I want [the world] to respect our country. People have respected me. My life has been a life where I’ve been respected. Interesting. So apparently Trump has a special one-way Twitter where he can’t see the better part of America calling him an orange-skinned doofus.

Look, nuclear is a horror show. I would be probably the last to even think about using [nuclear weapons]. Pretty gutsy of Trump to so brazenly alienate the pro-nuclear-war voter. But it’s a little surprising to hear him say this. If ever there were a presidential candidate who could find the bright side in nuclear holocaust, it would be Trump. A missile here, a missile there, we take out ISIS, China, the New York Times—boom! It’s over and everyone’s home in time for dinner. MY NUCLEAR WARS ARE THE BEST.

I think if somebody gets nuclear weapons, that is a disaster. I don’t know—Matt Damon could probably be trusted. He seems nice.

We don’t win at trade. We’re going to win at trade. We’re not going to be the dummies anymore. There are many things Trump does not understand. He doesn’t understand how laws are made in the U.S., or how the budget works, or that humans are born with an inside voice. He really doesn’t understand trade. His entire policy is geared to making Americans pay more for consumer products. Ladies and gentlemen: the iPhone 7! (It’s an iPhone 4 and it costs $2,000.)

[NATO] is many, many decades old, like now 68 years, but it’s many, many decades old. It’s unusual to know and reference the exact age of NATO, isn’t it? That’s the kind of thing you do when you’ve been desperately cramming on a topic and want to show off your new knowledge. Admiral, let’s redeploy the USS John C. Stennis, the Nimitz-class aircraft carrier commissioned Dec. 9, 1995, with a maximum navigational draft of 37 feet. By the way, NATO is 67. Subtraction is hard.

I’m not a world expert on NATO  (or math) but I have a natural instinct for certain things, okay? Like I said [during the Gulf War], America should keep the oil. Well, now ISIS has the oil. I said a lot of things. I believe we’ve finally found the perfect title for Trump’s inevitable autobiography of his time in politics: I Said a Lot of Things.

We will knock out ISIS fast and we will do a lot of things. If you listen to Trump for any length of time (important: do not do this) you will find a lot of sentences on foreign policy constructed this way. Things get vague in a hurry. The basic equation is Implausible Claim + Hazy, Ill-Deﬁned Follow-up Assertion. We will tear up our trade agreements and so forth! We will achieve Middle East peace and then some! We will do something we can’t do and then something else I haven’t figured out yet!

If our presidents would have gone away and gone to the beach, the Middle East would be a far better place than it is right now. Possibly. But would that be worth of price of George W. Bush still being buried up to his neck in sand?