The odds of a Trump win? 19 per cent: 338Canada election forecast

Philippe J. Fournier: The current map shows a distinct advantage towards Joe Biden. But any victory will ultimately come down to three crucial states. 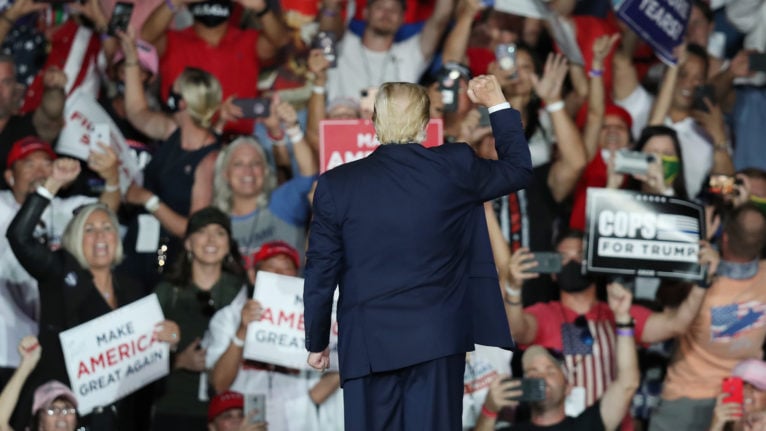 Trump waves to the crowd as he leaves after speaking during a campaign event at the Orlando Sanford International Airport on Oct. 12, 2020 in Sanford, Florida (Joe Raedle/Getty Images)

The first presidential debate has not had the desired effect for President Donald Trump according to the data made public since early October. His own COVID-19 infection and hospitalization did not bring about a “sympathy boost” in the polls as many had hypothesized last week. Quite the opposite, it appears Joe Biden has solidified his position as the favourite to win the Nov. 3 presidential election south of the border.

The national polls had Biden ahead by an average margin of 6 to 8 points before the debate. As of this writing, the 338Canada presidential forecast has Biden leading by nine points on the national level:

However, while a Trump victory with the current numbers would be an upset, it would still not be a one-in-a-century or -millennium event: The 338Canada model has Biden winning the Electoral college in 81 per cent of all simulations; meaning Trump’s chances at re-election remain at around 19 per cent, roughly the odds a dice roll.

While is is undeniable that the Electoral College system still heavily favours Republican candidates in the presidential race, the current map shows a distinct advantage towards Joe Biden (yes, still keeping in mind that state polls could be off by a handful of points, like it was the case in Wisconsin and Michigan in 2016).

In Wisconsin, Biden’s lead over Trump has held mostly steady since the summer months. The current averages has Biden at 51 per cent and Trump at 43 per cent.

Here are the Wisconsin polls since early September. Biden has held the lead over Trump in every single one of them.

In Michigan, the forecast shows similar numbers, with Biden also at 51 per cent and Trump at 43 per cent. In the waning days of the 2016 campaign, polls in Michigan had Clinton leading by four points on average, but Trump pulled the upset by 0.2 point. Even if polls this time around were to be similarly skewed, Biden would still win Michigan and its 16 electoral votes:

Here are all Michigan polls since September. Biden’s lead has been mostly constant, save for a Trafalgar Group poll showing a statistical tie (Trump +1). However, it must be noted that Trafalgar has a poor C- rating from FiveThirtyEight with a measurable Republican house effect.

In Pennsylvania, where Trump beat Clinton by 0.7 point in 2016, the race has been somewhat closer than in the two aforementioned Midwestern states, but Biden’s lead has also been mostly constant in the past months.

Here all the recent Pennsylvania polls. Biden’s lead has ranged from 2 to 13 points since September:

While it is entirely reasonable for Democrats to push for ad-buys and intense campaigning in other states, notably in historically republican strongholds of Texas, Georgia and Arizona, one could also argue they should not try to spread their resources too thin. Although some believe a Biden rout of 360+ electoral votes could potentially crunch the growth of Trumpism (I have many doubts), all the Biden team has to do from now to Election day is secure these three states: Wisconsin, Michigan, Pennsylvania to pass the 270 EV-threshold and make Trump a one-election wonder.

We notice that should Biden wins Wisconsin, Michigan, and Pennsylvania—all states Clinton lost by less than one point each in 2016—he won’t even need these toss up states, except as a safety cushion.

Election day is three weeks from today. We will publish daily updates until then.