The return of fear on the U.S.-Canada border

The rise of the Islamic State have politicians panicking about another possible terror attack. That could spell trouble at our border. 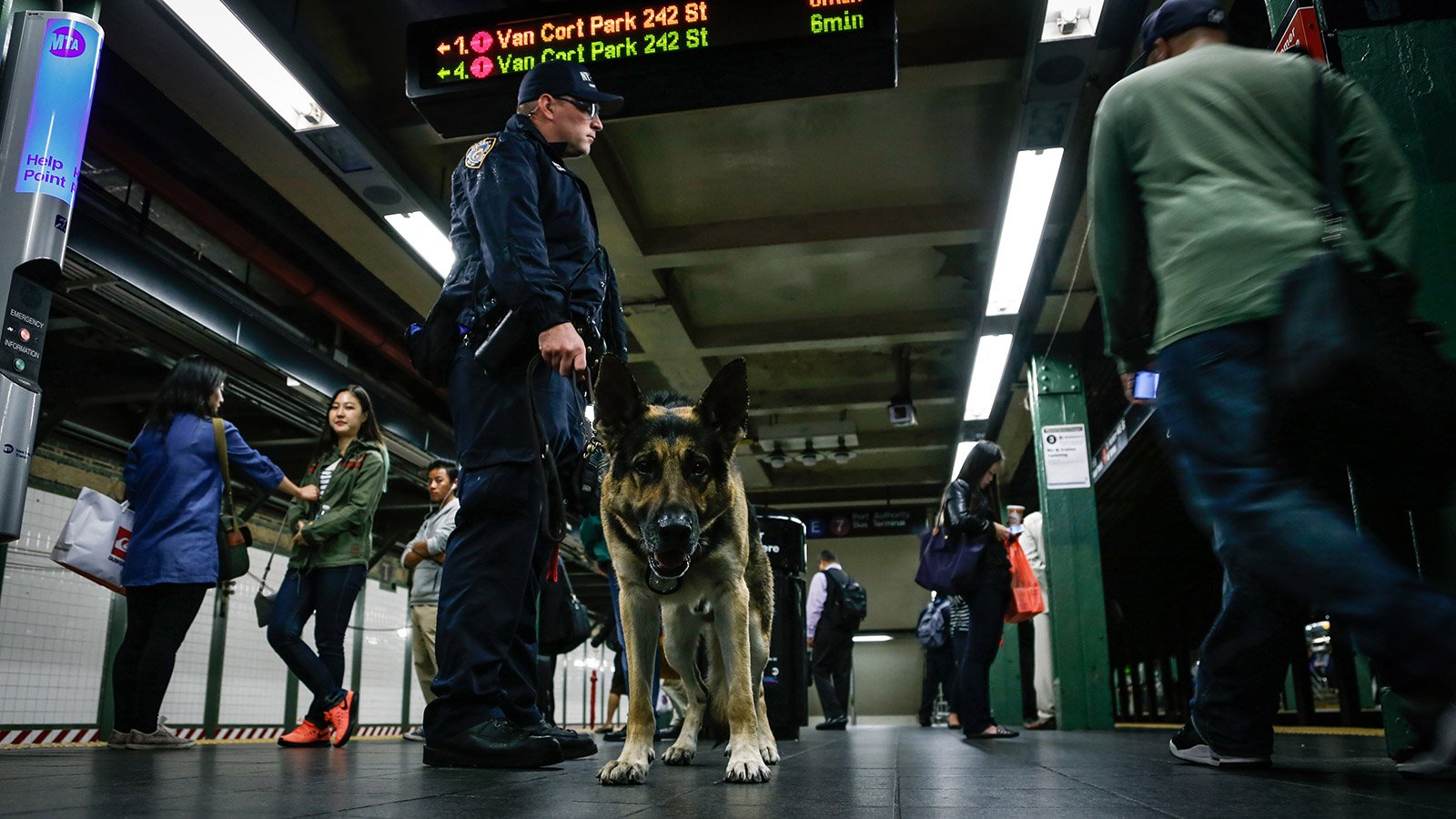 Not since the terrorist attacks of September 2001 have ordinary people been as concerned about the risk of a terrorist attack inside the United States. Since Islamic State militants began seizing swaths of Iraq and Syria and beheading Western hostages, nearly half of Americans now believe their country is less safe today than before the 9/11 attacks, according to a recent NBC poll. That’s almost double the number from just one year ago.

Citing the potential for jihadists with Western passports to enter undetected into the U.S., some Washington politicians sound downright panicked. “This is a turning point in the war on terror,” South Carolina Sen.Lindsay Graham told Fox News. He called on President Barack Obama to deploy thousands of ground troops to Iraq, “before we all get killed back here at home.”

“They intend to kill us. And if we don’t destroy them first, we’re going to pay the price,” said House Speaker John Boehner this Sunday. Obama’s own secretary of defence, Chuck Hagel, has called the Islamic State group “an imminent threat to every interest we have.” John Allen, a retired four-star Marine Corps General who formerly led the war effort in Afghanistan, declared it “a clear and present danger.”

Fears were heightened when the Iraqi president, Haider al-Abadi, said on Sept. 25 that there was credible evidence of a plot by Islamic State to attack subways in New York. Police presence was beefed up in stations and Mayor Bill de Blasio rode the trains to reassure the public. Meanwhile, U.S. intelligence agencies said they had no indication of such a threat.

Whenever Americans get scared, Canadians brace for economic repercussions. The attacks of 9/11 led to security policies that critics say resulted in a “thickening” of the border that hampers commerce and trade. In the 13 years since, enormous government and corporate efforts have gone into trying to roll back, or make more efficient, the resulting wave of new security procedures in the name of keeping commerce alive. But many of the steps are permanent: from arming Canadian customs officers to a requirement that all travellers carry a passport in order to cross the international line. The border is now once again in the political crosshairs. “There is a great concern that our southern border, and our northern border, is porous and that [terrorists] will be coming across,” said Sen. John McCain this month.

One bill introduced in Congress this month would tighten information-sharing agreements between the U.S. and other countries and put in place stricter pre-travel clearance procedures for travellers who do not require visas to enter the U.S. Another bill would impose a visa requirement on countries whose citizens are known to be fighting with Islamic extremist organizations. The Canadian government says at least 130 Canadians have joined Islamic State—others suspect the number is far higher. Hundreds more Islamic State militants are believed to hold European or Australian passports, giving them the ability to fly to the U.S. without visas, too.

“We have to be proactive in protecting our homeland. Terrorists with Western passports pose a clear risk to the United States,” said Congressman Scott Perry, a Republican of Pennsylvania, one of the bill’s sponsors. U.S. intelligence reports that some 100 Islamic State militants are believed to hold American passports.

Against that backdrop, U.S. Homeland Security Secretary Jeh Johnson was in Ottawa this week meeting with Canadian officials regarding the ongoing “Beyond the Border” effort to streamline security at the border. This month, U.S. Customs and Border Patrol officials said the governments are considering adding retinal scans and fingerprinting between Detroit and Windsor, the largest commercial crossing between the two countries.

There is much debate over what kind of threat Islamic State poses to the U.S. homeland—and whether it posed any threat at all before the U.S. began its campaign of air strikes. After all, the group was considered locally oriented before the air strikes this summer, which were intended to help civilians in northern Iraq and stall the group’s advance. The group presented the beheadings of U.S. journalists as retaliation for those attacks.

After the military campaign intensified, the head of the al-Nusra Front, a militant group in Syria, warned in an audio message last week that “this will bring the battle to your own countries,” according to MEMRI, a website that monitors jihadist threats.

The irony is that the U.S. has never spent more money protecting itself. The estimated $6 trillion spent on wars in Iraq and Afghanistan were justified on the grounds that “it’s better to fight them there than here.” The U.S. military budget of $750 billion is more than that of all other countries’ of the world combined. The annual budget for the Department of Homeland Security, created after 9/11 to combine agencies that secure the border and respond to emergencies, is $60 billion. Until this summer, the spending seemed to buy some solace. So-called “core al-Qaeda” was disrupted and its leader long dead.

In his State of the Union speech in 2013, Obama declared, “The organization that attacked us on 9/11 is a shadow of its former self.” Last year, he said, “America must move off a permanent war footing.” This weekend, however, Obama acknowledged he had underestimated the threat from Islamic State. His administration also announced that in the course of bombing Islamic State in Syria, it had taken the opportunity to bomb another group, which it called Khorasan, of which few Americans had heard previously, and which apparently consists of elements of al-Qaeda who were supposedly planning to attack the West.

So how scared should Americans be today? Last week in Oklahoma a woman was beheaded at a food-processing plant, allegedly by a former colleague who had recently converted to Islam. Its similarities to the beheadings of two U.S. journalists by Islamic State in Syria were terrifying, and fuelled fears that terrorism could strike anywhere. Officials, however, were quick to reject any links to organized terror groups.

Since 9/11, the ability of terrorist groups to infiltrate the U.S. from abroad is actually much diminished. “There has been a tremendous increase in intelligence efforts and unprecedented co-operation in terms of intelligence agencies and law enforcement world-wide,” says Brian Michael Jenkins, a terrorism specialist at the Rand Corporation, a California-based think tank. “The kinds of transactions that preceded 9/11—the movement of people and money and communications—those are far more likely to be picked up by the intelligence services today than they were immediately after 9/11,” he says.

The 100 Islamic State fighters with U.S. passports that alarm Washington is comparable to the number of Americans who travelled to the Middle East and North Africa in recent years to join al-Qaeda and affiliated groups, he says. Many were arrested trying to enter the U.S., and others were killed fighting abroad.

There has been no centrally directed large-scale terrorist attack in the U.S. since 9/11. (The attempt by the “underwear bomber” to detonate an explosive aboard an airliner en route to Detroit on Christmas Day 2009 was a close call, hampered by the would-be bomber’s own incompetence.) The incident galvanized the Obama administration to take even stronger counterterrorism measures.

In addition to the Oklahoma attack, several Americans have been killed in homegrown lone-wolf attacks linked to radical Islamist ideology. An Army major who had expressed anti-American views and had tried to contact an al-Qaeda propagandist online, killed 13 people in a mass shooting at an Army base in Fort Hood, Texas, in 2009. The same year, a mentally ill man who had converted to Islam shot and killed a U.S. soldier at a military recruiting station in Little Rock, Ark. And one of the Tsarnaev brothers who killed three people with pressure-cooker bombs at the Boston Marathon in 2013 had embraced radical Islam, though were not part of a foreign terror group.

The chances of dying in a terrorist attack are orders of magnitude smaller than the probability of dying in a car crash. “By any statistical measure we are safe. Are we safer than we were? Yes,” says Jenkins. “Are we safe enough? That is a question Americans are obsessed with.”