The United States of Americans opposed to Trump's tariffs on Canada

Having so aggressively poked a stick at his international allies, it’s fitting that Donald Trump’s Republican allies were among the loudest critics of his trade hostilities 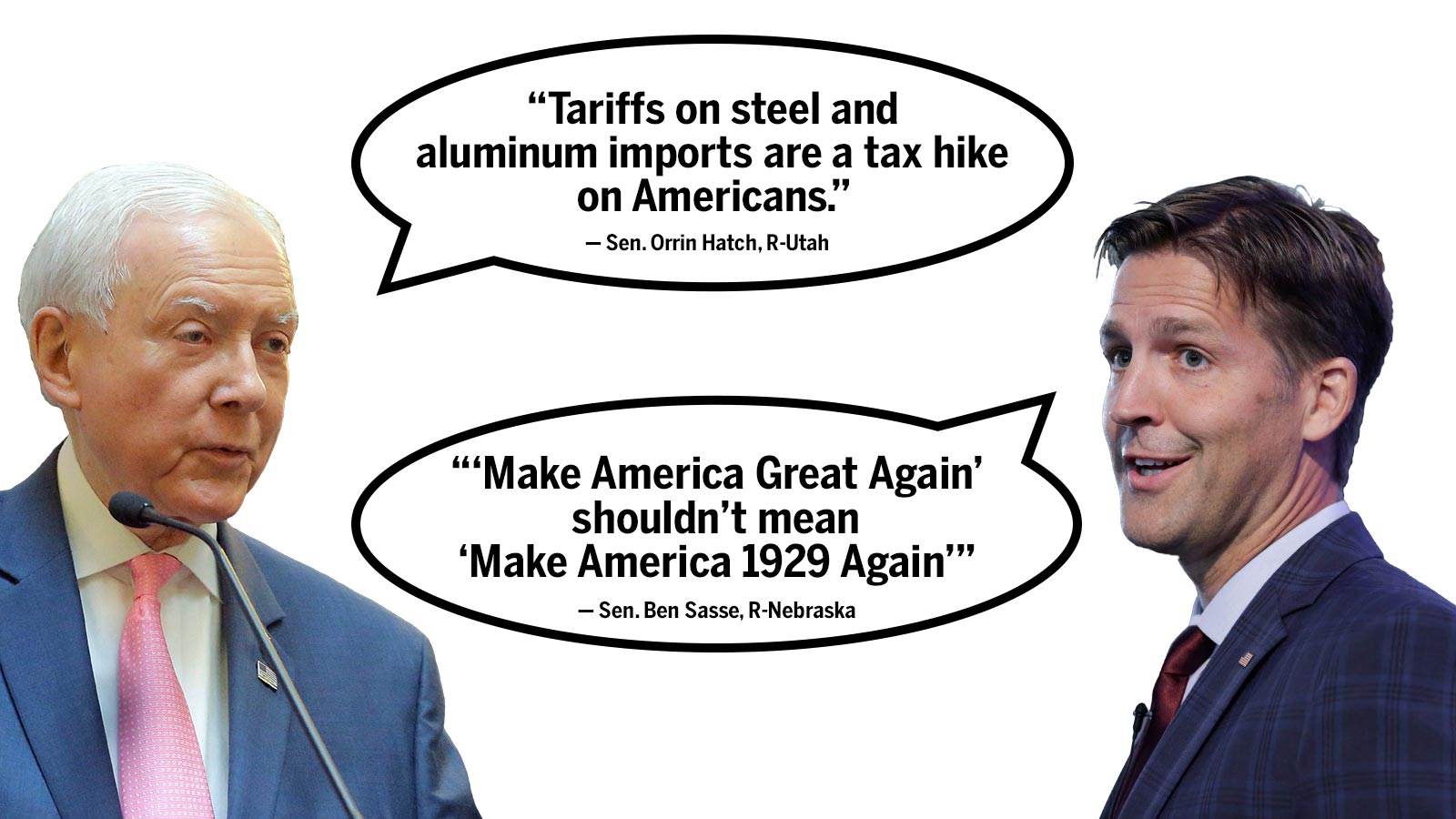 Kevin Brady, an 11-term Congressman for suburban-rural Texas, wears a big hat in the House of Representatives as chairman of the ways and means committee. He was proudly at President Donald Trump’s side as Republicans rushed through a massive tax-cuts package last year. But he’s not letting any red “MAGA” hats near his bald pate this week, after the Trump administration slapped steel and aluminum tariffs on Canada, Mexico and the European Union.

“This action puts American workers and families at risk, whose jobs depend on fairly traded products from these important trading partners,” Brady said in a statement Thursday after the tariffs were announced. “And it hurts our efforts to create good-paying U.S. jobs by selling more ‘Made in America’ products to customers in these countries.”

His tax-bill-writing counterpart on the Senate’s finance committee, Orrin Hatch of Utah, felt the same way: “Tariffs on steel and aluminum imports are a tax hike on Americans and will have damaging consequences for consumers, manufacturers and workers.”

Having so aggressively poked a stick at his international allies, it’s fitting that Trump’s Republican allies were among the loudest critics of his trade hostilities. “This is a big mistake,” said Sen. Lamar Alexander of Tennessee. Sen. Ben Sasse of Nebraska called it “dumb” and quipped: “Make America Great Again shouldn’t mean Make America 1929 Again.”

READ: Ronald Reagan had a message about free trade with Canada that Donald Trump needs to hear

By putting traditional U.S. friends in a retaliatory mood and irking his own Grand Old Party, Trump accomplish a rare feat: the President has finally created some unity in his deeply-divided country. Pretty much everyone is miffed.

Here’s Elise Stefanik, a Republican congresswoman from upstate New York: “As a Northern Border district, I am concerned that these tariffs could incentivize Canadian firms in our district to leave, or possibly incentivize Canada to impose harmful tariffs on our own products.”

Tim Ryan, a Democrat from rust-belt Ohio who supports a NAFTA overhaul: “This decision could be a disaster if not overturned soon. Of particular concern, we are punishing our friends in Canada and Europe who have similar—and in some cases, stronger—worker protections and environmental standards.”

Democratic Sen. Ron Wyden, of Oregon, cheered Trump’s tariffs—when they were applied to China. Now, not so much: these tariffs, on the very allies we need to pressure China, make no sense. To date the Administration appears to be pursuing a trade policy that creates economic chaos and uncertainty rather than jobs for hard working Americans.”

Organized labour had also been rah-rahing trade actions against China, in hopes they’d boost manufacturing at home. But groups like AFL-CIO and United Auto Workers have been quiet since Thursday. The United Steelworkers spoke up, unhappy this time, on the northern neighbour’s behalf: “The decision not to exempt Canada ignores the fact that Canada’s steel and aluminum exports to the United States are fairly traded and that Canada has shown its willingness to strengthen its laws as well as its cooperation with the United States to fight unfair trade.”

Predictably, conservative think tanks were grumpy, as they traditionally back free trade. The Conservative Enterprise Institute: “President Trump’s steel and aluminum tariffs against our allies are a huge mistake. While the tariffs could potentially save 33,000 steel jobs, the harms to downstream industries from automobiles to construction to food production could result in a net loss of 146,000 American jobs.” And Freedom Partners, part of the right-wing industrialist Koch brothers’ network: “Trade wars hurt everyone. They trigger retaliatory tariffs from our trade partners. American families need affordable access to household goods – not higher prices driven by tariffs. We urge the Trump administration to abandon these tariffs.”

READ: These are all the U.S. products Canada may hit with tariffs, including pipes, pizzas and pens

This week, these organizations found themselves linking arms with the likes of the left-leaning Economic Policy Institute: “He doesn’t have a strategy that’s going to lead to making American manufacturing great again. There will continue to be a series of tit-for-tat battles,” says Robert Scott, a trade expert at the institute, told USA Today.

The business world, which will have to pay higher prices for imported steel and face new export surcharges on many things they ship, are also miffed. Look no farther than the alcoholic beverage realm to understand the impacts. Pete Coors, chairman of Miller Coors, cohosted a Trump campaign fundraiser two years ago. His beer giant also uses mass amounts of imported aluminum. “I love what the president’s done in most cases but the tariff is basically a tax on people who use aluminum.”

And the distillers in Kentucky, whose bourbon is the target of retaliatory tariffs from Canada and Europe, may be reaching for the hard stuff. “We remain hopeful that continued negotiations will avoid a costly trade war and protect our allies and partnerships around the world, which will continue to benefit spirits producers and consumers for years to come,” said the Kentucky Distillers’ Association.

Even the country’s Aluminum Association, whose foreign rivals were getting hit with tariffs, was unhappy. “The association, which represents the majority of aluminum production and jobs in the United States, believes that no country that operates as a market economy should be subject to unnecessary and disruptive tariffs or quotas. The administration’s trade remedies should specifically target structural aluminum overcapacity in China,” the group said.

Fans of the newest Trump tariffs are hard to find. Google “pro-Trump economist” and you find Stephen Moore, one of his former advisers. On this, he’s not pro-Trump. “It will be more expensive to buy a car or manufacture goods. It’s a risky strategy, but I don’t see Trump necessarily backing down. He’s trying to get these countries to negotiate, and it might take months to settle,” Moore told a Chinese TV program. He also agreed with Prime Minister Justin Trudeau about the absurdity of using national security as pretense to punish Canada: “There are some cases where you have some strategic assets or minerals or you could even possibly make the case steel is something an industrial country needs to maintain its military. But automobiles? I mean, come on. That’s just not a very credible claim to say our national security is at stake because we’re driving German or Japanese autos.”

So who’s left to cheer on Trump? There’s conspiracy monger and Trump-loving Twitter troll Jack Posobiec: “Other countries impose import restrictions on US goods, now the US is imposing tariffs on their goods. Finally someone has the guts to fight back!” he tweeted.

And while the aluminum lobby was unimpressed, the Steel Manufacturers Association will applaud: “We support President Trump’s objectives under section 232 to remove the threat that steel import surges pose to our national security and restore the domestic steel industry to health.”

Peter Navarro provided the pro-tariffs perspective in a newspaper op-ed, doing his part as Trump’s director of the National Trade Council. He wrote about a new aluminum plant in Kentucky. “There can be no better way to make America — and American manufacturing — great again than to start to rebuild those communities of America most harmed by the forces of globalization. These new facilities will stand as shining testimony to the success of tough trade actions, smart tax policies and targeted worker-training programs.

Fox Business would seem like a good sanctuary for pro-Trump voices on a week like this. Host Lou Dobbs got giddy: “Just read the most succinct policy statement a president has ever written. It reads, here’s his tweet. ‘Fair trade!’ Exclamation mark. Like I said: this president is a marvel.”

But even Fox Business wasn’t the positive feedback loop Trump hoped for. Another anchor, Tegan McDowell, said: “You have a policy and retaliation from allies of ours that going to drive up prices for businesses and consumers, introduce business uncertainty, and maybe lose jobs.  This is all by edict out of the White House. And quite frankly, if President Obama had pulled this, we would all be sitting here screaming to the high heavens, pulling our hair out.”