Throwing strikes is not on Donald Trump's agenda

Daily Trump Tracker: The president turns down an invitation to play ball, and Maine makes a medical fuss 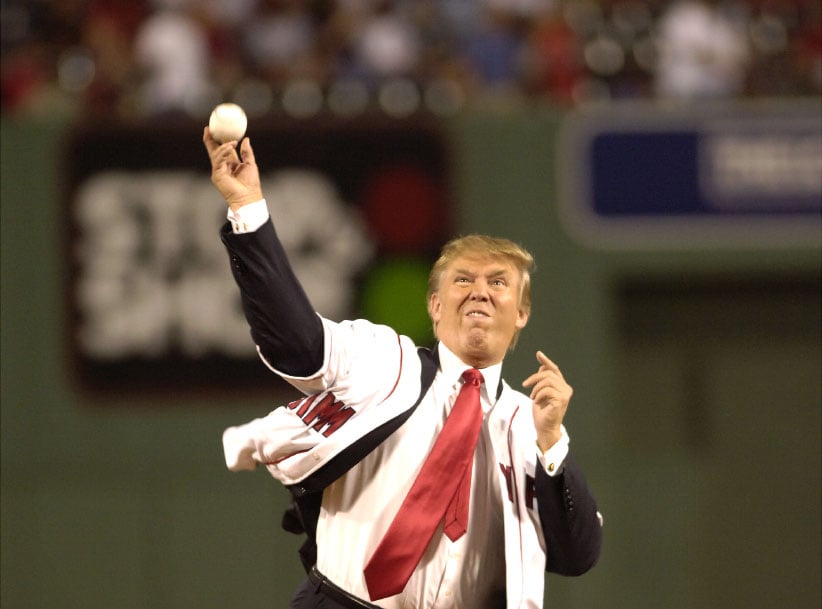 Donald Trump throws out the ceremonial first pitch before the start of the second game of a day-night double header between the Boston Red Sox and New York Yankees at Fenway Park, 2006. (Howard Earl Simmons/NY Daily News Archive/Getty Images)

No peanuts and crackerjacks for me
Trump’s outfit isn’t complete without a MAGA baseball cap, but he won’t be heading to a diamond Monday. The president reportedly turned down the Washington Nationals’ offer to let him hurl the first pitch in their first game of the new season. The New Yorker is a Yankees fan, but he supposedly declined the invitation for reasons of scheduling rather than rooting loyalty.

The Pine Tree State goes its own way
After the president’s preferred replacement for Obamacare fell apart at the hands of his fellow travellers, Maine governor Paul LePage said the state may set up its own health insurance system. The Republican, who says he’s “arguably one of the most conservative” governors in the country, likened allowing the existing coverage system to collapse to jumping off a bridge.

Another non-aggression pact falls to the Trump effect
Time was when state attorneys general would stay out of each others’ way at election time. The gentlemen’s agreement (42 of 50 are dudes) meant that the Democrat and Republican national political organizations representing states’ top lawyers wouldn’t target opposite-side incumbents running for another term. But Reuters reports that the GOP grouping is dropping their end of the bargain, in part because blue state AGs have been taking to court to stop Trump’s plans.

Don’t ask him about his business
John Kelly’s department implemented the president’s on-again-off-again travel ban, but please refrain from bringing up the racial and religious makeup of its targets in his presence. The Secretary of Homeland Security reportedly eyed the door at the Arab American National Museum in Dearborn, Michigan, when a local attorney brought up the profiling of Arabs and Muslims by border enforcement and Trump’s executive orders. Being chosen for “additional screening” is “not based on religion or colour or politics,” Kelly intoned after.

The Alt-Trump that almost never was
Vanity Fair excerpted Alec Baldwin’s memoir, plucking a passage in which he discusses his *insert snooty voice* craft, lists acting influences, and traces the evolution of his comedy repertoire. But the only bit anyone’s going to be talking about is his meditation on the character he’s currently playing on TV. Baldwin says he had to be convinced to don the golden wig and duckface he uses to play Trump, and claims the president’s hometown has never loved him much anyway.