Trump and Putin preside over the funeral for Ronald Reagan's party

Paul Wells: U.S. conservatives have always believed there can be no moral equivalence between democrats and authoritarians. Those days are over. 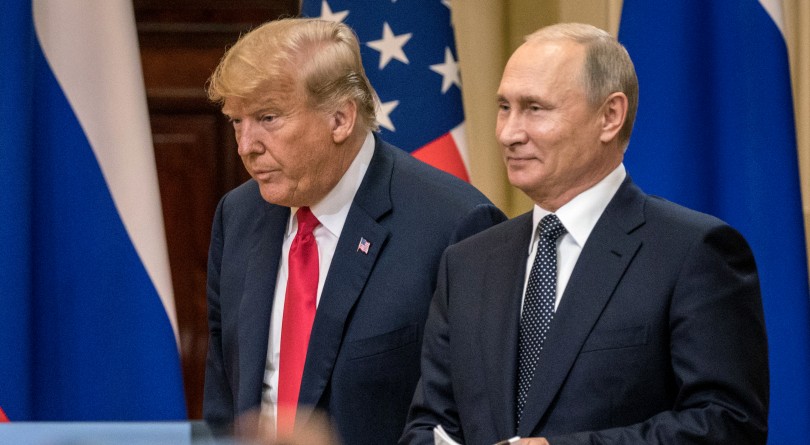 The cognitive dissonance for life-long Republicans must be intense. Right up through the 2012 election, when Barack Obama mocked Mitt Romney for what seemed to the Democrat to be an outmoded wariness about Russian intentions, the party of Nixon and Reagan held some truths to be self-evident. One of them was that Russia had an authoritarian streak that lay deeper than Stalinism. Moments or even extended periods of cooperation might be possible, based on hard-headed calculations of common interest—détente, or arms treaties, or exchanges of ballet companies. But no Russian leader’s good faith could be assumed. “Trust, but verify,” Ronald Reagan used to say, in a saying he’d borrowed from Russian.

In Helsinki on Monday Donald Trump abandoned the last half of that formula.

It’s hard to know where to begin tracing the contours of the American president’s capitulation, but maybe we should start here, with an element that I suspect will get less attention elsewhere. “I addressed directly with President Putin the issue of Russian interference in our elections,” Trump told reporters after their meeting. “I felt this was a message best delivered in person. Spent a great deal of time talking about it. And President Putin may very well want to address it, and very strongly, because he feels very strongly about it—and he has an interesting idea.”

Note here the U.S. president pointing out the Russian president’s “strong feelings” about claims of Russian interference in an American election—a topic that might normally be expected to elicit strong feelings from the American. But what’s this “interesting idea” that Trump is eager to hear Putin repeat?

READ MORE: There is no precedent—a president sides with America’s enemies

It’s the one Putin described minutes later in detail, in his answer to a question from a Reuters reporter, who wondered whether Putin is considering extraditing the 12 Russians Robert Mueller indicted on Friday for hacking the DNC  so they can stand trial in the United States under U.S. law. Of course that won’t happen. Putin instead offered the existing mutual-assistance treaty between the two countries, which would leave indicted Russians in Russia. “And our law enforcement are perfectly able to do this questioning and send the appropriate materials to the United States,” Putin added.

Indeed, he added grandly, he would even permit Mueller or his associates to “be present at this questioning.” Not to ask the questions, you understand, but to watch Russians interrogate their colleagues.

“But in this case, there is another condition,” Putin added.

“This kind of effort should be a mutual one. Then we would expect that the Americans would reciprocate, and that they would question officials, including the officers of law enforcement and intelligence service of the United States, whom we believe have something to do with illegal actions on the territory of Russia. And we have to request the presence of our law enforcement.”

Did he have anyone in mind for such a Russian fishing expedition in American waters? Yup: Bill Browder, the British financier whose “Magnitsky act” campaign seeks to hit Russian oligarchs where it hurts—in their wallets. Putin went on to accuse Browder of using purloined Russian money to finance Hillary Clinton’s campaign. The Washington Post promptly labelled the accusation “obviously false.”

Trump found this whole idea so intriguing he actively promoted it at their joint news conference, because to Donald Trump there is perfect moral equivalence between any Russian interference in American elections and any American interference in Russian elections. Which is why any Republican with any spine remaining must have hated Monday.

A central tenet of U.S. conservatism is that there can be no moral equivalence between democrats and authoritarians: that U.S. interference to make Russian elections freer can’t be held equivalent with Russian interference to make U.S. elections more chaotic. Now, of course the notion of U.S. moral superiority has been a tricky one, used to justify the country’s worst foreign-policy excesses. But to Republicans it was always an article of faith.

Those days are over. Indeed, for Trump, it’s not that the U.S. and Russia are morally equivalent: It’s that Russia is morally superior.

Reporter Jonathan Lemire from AP put an elegant question to Trump: “Just now, President Putin denied having anything to do with the election interference in 2016. Every U.S. intelligence agency has concluded that Russia did…. Who do you believe?”

It’s worth jumping in here to recall that Lemire’s “every U.S. intelligence agency” is not a mere rhetorical flourish. It’s rigorously accurate: it refers to a joint assessment of all U.S. intelligence agencies, working together, requested by Barack Obama and produced in the last days of his presidency. That’s also a handy, if only partial, rebuttal to Trump’s constant claims that Obama did nothing in response to rumours of Russian interference.

“My people came to me, Dan Coats came to me and some others, they said they think it’s Russia. I have President Putin; he just said it’s not Russia. I will say this: I don’t see any reason why it would be.”

That would be Dan Coats, the Director of National Intelligence, who was appointed by (checks notes) President Donald J. Trump in 2017, and who said the other day that “today, the digital infrastructure that serves our country is literally under attack.”

Now, I get the arguments about loyalty, and about sticking it out when times are tough to ensure the president continues to get lucid input even if it doesn’t ensure lucid output. But today would be an excellent day for Dan Coats to resign, because Donald Trump just told the world he holds Dan Coats to be less reliable than Vlad Putin, and it’s as plain as dirt that none of that will change without somebody like Dan Coats precipitating a political crisis.

But Dan Coats is a career Republican, so we know he won’t do anything of the sort. He came up in the Reagan years as a sort of protegé of Dan Quayle, the first President Bush’s vice president, and I doubt he’s been offside the team more than three times in his life. He won’t start now. It’s a bad day for cognitive dissonance in the GOP, but they’ll get over it. They always do.

Meanwhile, Trump wasn’t done talking. Having ranted about his belief that the U.S. intelligence community was out to get him, he returned to Putin’s offer to help America find the path back to moral rectitude. “And what he did is an incredible offer,” Trump said of Putin’s offer of reciprocal police investigations. “He offered to have the people working on the case come and work with their investigators with respect to the 12 people. I think that’s an incredible offer. OK?”

OK, Mr. President. The United States stands accused—by its own president—of “foolishness and stupidity,” of witch hunts, of disgraceful behaviour. The thug who runs Russia is not only a moral beacon by comparison, he’s the only hope of guiding America back to the light.

It could have been worse. Trump did not concede Russian sovereignty over Crimea, though I strongly suspect that’s because nobody at the news conference asked. He didn’t formally call for NATO’s dissolution, though on any given morning nothing is stopping him from doing so on Twitter. He didn’t repeat his calls for the destruction of the European Union, which with the collapse of NATO is one of Putin’s two most important strategic objectives, although after last week’s Sun interview that would have been redundant.

Trump’s trip to NATO, the U.K. and Finland stands as one of the most consequential foreign trips any U.S. president has made in my lifetime. He presided with the Russian president over the final collapse of the Republican Party as a set of ideas about America’s place in the world. It is now a fairly effective machine for winning elections and rewarding its lackeys. That’s all.