Trump has survived the 'witch hunt.' Now he wants to start his own.

Robert Mueller's report leaves the Democrats empty-handed and in denial. Next up: the inevitable recriminations. 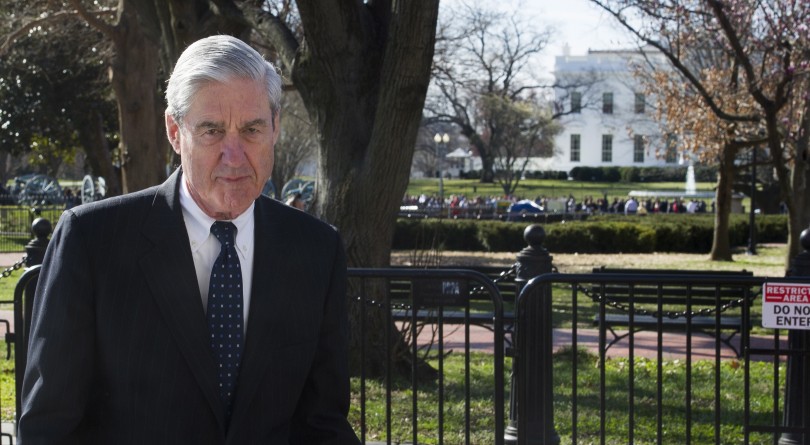 His portrait hangs in the Oval Office—an American icon, wounded three times by gunfire and slashed across the face by a surly officer’s sword, yet fated to serve two full terms in the White House and to die of natural disease in his own soft bed. It wasn’t there in the Obama years, but the canvas of Andrew Jackson—frontiersman, duelist, patriot, warrior, killer of Native Americans, seventh president, survivor—now commands the room.

Whether Donald Trump asked that it be hung, or whether ex-adviser Steve Bannon convinced him that he could tower over a new Jacksonian era of populist democracy, shoot-first bravado and racialist expulsion, no one but those two men knows.

Now another president has escaped a mortal wound. Next November, it now seems certain, the voters of the 50 states—not a congressional court of impeachment—will judge whether or not the 45th chief executive serves a second term. Divine Providence—and the skills of the federal cardiologist—will determine if and when he expires peacefully in his own boudoir, or lustily in someone else’s. On Sunday afternoon, after 22 months of inquisition—the assassination-by-intimation that Trump repeatedly and effectively labelled a “WITCH HUNT” by Special Counsel Robert Mueller and his “17 Angry Dems”—formally and finally determined what The Donald had bleated all along: NO COLLUSION.

“It’s a shame that our country had to go through this,” Trump exuberated at the West Palm Beach airport Sunday before flying back to Washington from a lay-low golfing weekend at his low-rent oceanic hermitage, filled with his habitual tincture of venom and self-pity.

Then, on the South Lawn at sunset, with the odour of helijet fuel and victory in the air: “I just want to tell you that America is the greatest place on Earth.

“To be honest, it’s a shame that your president had to go through this before I even got elected.” (To compel Donald Trump to be honest, of course, was the point of the whole exercise. Now it turns out that, in the purview of the Special Counsel and Attorney General at least, he was.) The whole episode was, the president said, “an illegal takedown that failed … and somebody’s going to be looking at the other side.”

The witch hunt being over, he was saying, means that it is time for Republicans, yet again, to hunt a certain witch. Trump’s chattels strutted like cocks. “Great day for President Trump and his team,” sang Sen. Lindsey Graham, Republican of South Carolina and one of Trump’s golfing partners in Florida on Sunday. “The cloud hanging over President Trump has been removed by this report.”

“It was a complete and absolute victory,” presidential barrister Rudy Giuliani crowed, “’way beyond what anyone could have expected a year ago. You have to wonder why did this investigation begin in the first place, and who paid for it?”

“It,” in Attorney General Barr’s tabulation, added up to “19 lawyers who were assisted by a team of approximately 40 FBI agents, intelligence forensic accountants, and other professional staff. The Special Counsel issued more than 2,800 subpoenas, executed nearly 500 search warrants, obtained more than 230 orders for communication records, issued almost 50 orders authorizing use of pen registers, made 13 requests to foreign governments for evidence, and interviewed approximately 500 witnesses.”

RELATED: The investigation into Donald Trump and Russia: FAQ

All to put Trump’s campaign manager and chief of staff and personal flack and a couple of young dupes in jail while their liege gets off untouched.

According to Mueller’s report—as filtered for congressional and public consumption by new-old Attorney General William Barr—the Russian government did methodically and maliciously hack its way into the 2016 election, an act so diabolical and brilliant that more than a dozen Putinites have been charged with cyber-crimes for which they never will stand trial in the United States.

But Trump and his offspring, lackeys, aides and acolytes were either too naïve, too ignorant, too incurious or too righteous to help them. Case closed!

“The Special Counsel did not find that the Trump campaign, or anyone associated with it, conspired or coordinated with the Russian government in these efforts, despite multiple offers from Russian-affiliated individuals to assist the Trump campaign,” Mueller determined. These words will be inscribed, a century from now, on the Trump Memorial, much as the claim that “our long national nightmare is over” is etched on the bust of Gerald Ford, the post-Watergate president, that stands in the Capitol Rotunda.)

“The evidence does not establish that the President was involved in an underlying crime,” quoth Mueller. It’s a pesky thing, evidence—as for obstruction of justice in the firing of FBI Director James Comey because of what Trump called “the Russia thing,” Mueller couldn’t really figure out if the evidence pointed anywhere at all. ”While this report does not conclude that the President committed a crime, it also does not exonerate him,” Mueller waffled, leaving it to Barr—a Trump appointee, of course, installed and confirmed after “weak” Jeff Sessions was crudely canned—to make the final go/no-go decision on prosecution for obstruction.

Barr’s ruling, he wrote to Congress on Sunday, was “that the evidence developed during the Special Counsel’s investigation is not sufficient to establish that the President committed an obstruction-of-justice offence.” Democrats, of course, rejected the work of the 19 lawyers, 40 FBI agents, 500 subpoenas, etc., and vowed to continue tightening the screws on POTUS, his children, his staff and anyone else who, during a game of contract bridge, might ever have uttered the word “Trump” with a Slavic accent within range of a microphone.

“There’s still significant evidence” to charge the president with obstruction, Rep. Adam Schiff, Democrat of California, flailed Sunday, marking his intention to continue with congressional persecution of the president.

“While on occasion these cowards will resurface, they have lost all prestige and power,” Trump tweeted on Saturday. “They are losers and will always be losers.” He was referring to the final obliteration of the ISIS Caliphate in Syria, but he might as well have been talking about the House Committee on Oversight.

After two years of Trump and 22 months of inquisition, this may just be getting started. Next comes The Donald’s revenge.

“The president of the United States is a very powerful man and he was being investigated for something that never happened,” said lawyer Giuliani. “He is absolutely correct to be very, very upset.”

“I was born for a storm and a calm does not suit me,” echoed Andrew Jackson. “Peace, above all things, is to be desired, but blood must sometimes be spilled to obtain it on equable and lasting terms.”