Trump versus Clinton: can they pull a Reagan at the debate?

In their first presidential debate, both Trump and Clinton need to cross the threshold of acceptability 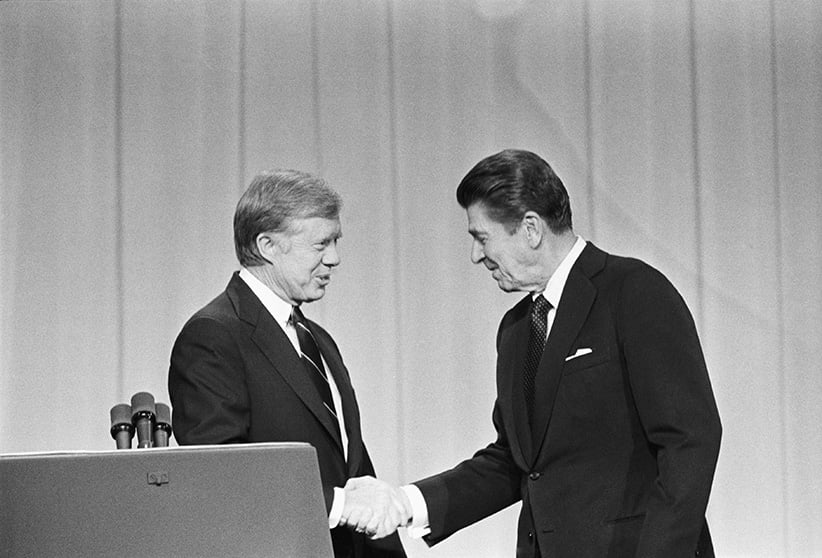 President Jimmy Carter and his Republican challenger, Ronald Reagan, shake hands as they greet one another before their debate on the stage of the Music Hall in Cleveland, Ohio, 1980. (Bettmann/Getty Images)

Donald Trump wants to be Ronald Reagan. Well, every Republican candidate wants to be Reagan. But specifically, Trump is probably hoping the debates can be for him what they were for Reagan in 1980.

The story is fairly well-known. There was only one debate that year, and it was held with only a week to go until Election Day—campaigns were not quite as endless then as they are now. The polling data wasn’t as plentiful then as it is now, either; going into the debate, Reagan probably had a small lead, though at least one major poll showed Carter ahead. There were a lot of undecided voters, though, and they mostly seemed to break for Reagan. Since then, the debate has often been pointed to as a turning point for the Reagan campaign, which either won him the election or made his win bigger than it might otherwise have been.

Debates rarely have that kind of impact. The Nixon-Kennedy debates were famous for confirming the importance of looking good on TV, and since there wasn’t a lot to choose between the candidates on policy, Nixon’s bad TV image might have done him in. Still, it was a close race before, and it was a close race after. In his first debate with Mitt Romney, Barack Obama gave one of his worst performances and Romney gave one of his best, but Romney isn’t president now. A normal debate can swing some voters, but not a huge number of undecideds.

So why might it be different with Trump and Clinton? To answer that, it may be important to look at what was going on with Reagan and Carter in 1980. Carter was not a popular president, and his standing had been hurt by an insurgency from the left of his party. With an unpopular incumbent and a grim national mood, circumstances favoured the Republican.

But the Republican was Ronald Reagan, and a lot of people simply couldn’t see their way to voting for him. Some found it hard to take an actor-turned-politician seriously, while others thought he might be too conservative for a nation that hadn’t elected a truly conservative Republican in a long time (and had rejected the last conservative candidate, Barry Goldwater, in a landslide). These were people who might have voted for Gerald Ford if he’d been up for a rematch with Carter, but had never considered anyone like Reagan.

What the debate might have done for Reagan, then, was to make him acceptable. It wasn’t necessarily about anything he said or policies he proposed; most people go into debates with their minds already made up about such things. But he seemed, at least, like a plausible president, and he tried to soothe people’s fears that he was too much of a Goldwater conservative to lead the country. The most famous moment from the debate was Reagan’s “there you go again” dismissal of Carter’s criticism. But what he said after the one-liner may be more important:

Carter was trying to call Reagan out for opposing a large government program that had proved to be very popular (and particularly popular with the older voters Reagan needed). Reagan’s reply portrayed his opposition as less a matter of Goldwaterite conservative principle as simple preference for another program. This was not what he was saying at the time, and Carter tried to point it out after the debate, accusing Reagan of “trying to rewrite history.” But instant fact-checks didn’t exist then, and even if they had been, the message was received: Reagan was not planning to get rid of socialized medicine for the elderly.

So those were the only things he really needed to do to get a landslide: stand up there without looking completely foolish, and reassure people that he wasn’t going to come after their benefits. It’s a low bar to clear, but again, structural forces favoured the Republican that year. All he needed to do was cross that acceptability threshold.

Now we can see how this applies to Trump. True, he has a higher low bar to clear than Reagan did, probably higher than any U.S. presidential candidate in history. Even people who loathed Reagan knew he was a real politician. Even now, many people don’t altogether take Trump seriously. And doubts about his temperament are well-rehearsed enough, on the left and the right, that they don’t need recounting here.

But just as in 1980, structural forces favour the Republican candidate. There are people who might vote Republican this year if it were a more respectable Republican. So in theory, if Trump looks like a normal person up there, if he avoids outbursts, if he avoids sounding racist (not even being, just sounding), then he might finally convince some of those holdouts to drop out of the undecided column or the Libertarian column or wherever they’re hiding. That doesn’t even necessarily mean he has to avoid any gaffes at all. It just means that he has to avoid gaffes that play on the fears potential Republican voters have about him: that he’s impulsive, that he’s crude, that he’ll treat the government like he treats his business. He needs to keep the things that turn off Democrats, but ditch the things that turn off suburban Republicans, who don’t want to think of themselves as part of the “basket of deplorables” and want to vote Republican without a feeling that they’re lowering their status by doing so.

Part of Hillary Clinton’s job tonight will be to try and goad him into turning those voters off again, the way the Khan controversy reinforced their doubts about his temperament. But she may also be looking to pull a Reagan herself. Plenty has been written every day about Clinton’s enthusiasm problem, and plenty more is written about why: is it because of her? Is it because of Millennials or old people? Did she spend too much time reaching out to ex-Republicans in an attempt to get a landslide that probably won’t happen?

But whatever the reason, there seem to be a lot of people who don’t want Trump to win, but still haven’t quite come around to voting for Hillary Clinton. If she could find some way to clear up their doubts about her, make them believe that the popular image of her is wrong, then the debates work for her. Romney’s advantage at that first debate was that after a campaign where he had made a lot of missteps, and said things that contributed to the popular image of him as a snob and a flip-flopper, he was able to show that there was more to him. It didn’t win him the election, but debates can’t do that single-handed. What debates can do, and what both candidates are hoping they can do, is make people say: “Hey, that person is not as terrible as I thought.”