Trump vs. Biden I: Come on, man

Paul Wells: Amid the chaos, Biden turned to speak to Americans, while Trump seemed barely aware anyone was watching at home. 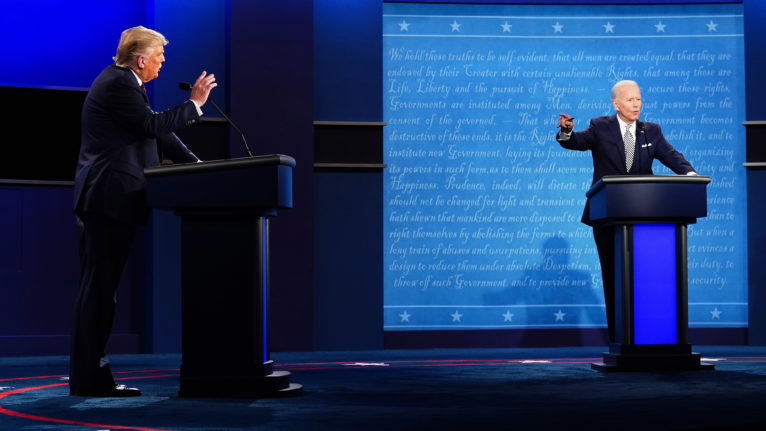 Almost my only theory of political debates is that voters couldn’t care less who “wins” a debate. They’re looking for a leader. And they don’t much care about tone or stature or whatever because they’re hoping to hear some solutions. So my advice to any politician is always the same: Most of your business shouldn’t be with the person standing behind the other podium. It should be with the people watching in the audience or at home.

Speaking as someone who hopes for an early end to the Trump presidency, the first few minutes of Tuesday’s debate in Cleveland made me nervous. Moderator Chris Wallace opened by asking the president why he should be able to get Amy Coney Barrett onto the Supreme Court, and Joe Biden why Trump shouldn’t be able. Trump’s answer was simple: “We won the election.” His voice was calm and even. Biden’s answer was long and complex, based on a hypothesis about how Barrett would rule on Obamacare.  And Biden doesn’t normally deliver complex answers cleanly. He’s just not a detail guy. Very soon the debate had another participant: Wallace, arguing with Trump about who should speak when.

If that dynamic had continued—Trump appearing calm and reasoned, Biden lost in subordinate clauses—he might have had a good night. But he’s Donald Trump. So pretty soon he was apoplectic (“He’s gonna destroy the country,” he said of Biden’s caution on post-COVID reopening) and conspiratorial (His closing remarks revisited boring grudges against Hillary Clinton).

Biden spent too much of the night sniping back at Trump, often in the very latest 1970s hipster argot. “Come on, man,” he pleaded with Trump, and “Will you shut up, man?” And “Folks, do you have any idea what this clown’s doing?” And “He’s a racist.” And “You are the worst president America has ever had.” It should be possible to put Trump on the defensive, for instance by asking him who’s been bankrolling his massive business losses since NBC stopped. But Biden didn’t really manage to put Trump on the back foot, except when he reminded people that Trump once thought injecting detergent was a good way to fight the coronavirus. “It was said sarcastically,” Trump said, which makes no sense.

It was a terrible debate, and it’s easy to blame Wallace, who had announced he would not be intervening much to enforce either the rules or observable reality. Big mistake. He might as well have worn a T-shirt saying I’M A DOORMAT, WALK ALL OVER ME. He soon realized he was presiding over anarchy and belatedly sought to impose order, which in the nature of things meant trying to rein in the free-associating, firefly-attention-span Trump.

Amid the chaos, Biden got only a few chances to tell Americans about his proposed solutions, but he took two of those chances, which is two more than Trump took. Wallace asked about Trump’s “V-shaped recovery”—sharp decline, sharp rebound—versus Biden’s “K-shaped recovery,” with some doing better and some doing worse. Biden said billionaires are already doing better. “But you folks at home, you folks living in Scranton and Claymont and all the small towns and working-class towns in America, how well are you doing?”

And during an astonishing exchange over Trump’s ludicrous claims of widespread voter fraud, Biden told voters they can determine the outcome, while Trump essentially declared the election invalid before the returns are in: “This is gonna be a fraud like you’ve never seen.”

In 2016, Trump’s support grew because he at least fitfully made himself seem more aware of American fear and insecurity than his opponent. In 2020, trailing in the polls, he barely seemed aware anybody was watching at home. All his business was with Biden (and Wallace, who was the best moderator in 2016 but who, surely, will not be invited back in 2024, when he will be almost as old as Biden is now). He was in big trouble before the debate. He remains in big trouble after.