We counted the third U.S. debate's lies—one Skittle at a time

We tracked the number of lies in the third Clinton-Trump debate with campaign-relevant candy, live. Watch our video replay. 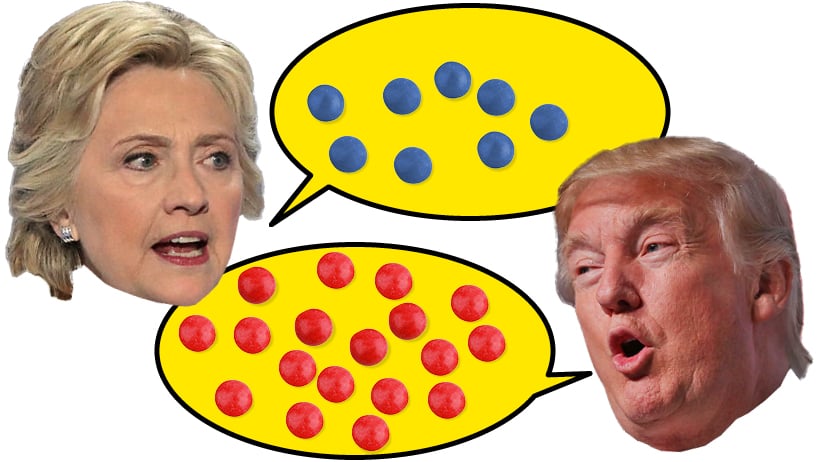 The third and final tete-a-tete in this wild U.S. election campaign has come and gone—and so we booted up the Maclean’s Skittles Meter to track the brazen falsehoods from both Democratic candidate Hillary Clinton and Republican nominee Donald Trump. It’s our way of measuring the debate’s outright lies, counted in the candy most closely associated with the campaign.

Here’s how it worked:

1. A team of Maclean’s editors closely followed and verified the fact-checking from a curated list of trusted sources on Twitter and elsewhere. That list, which makes up a good chunk of this fact-checking aggregation, can be found here.

2. Every time a fact-checker noted a lie, we added a blue (Clinton) or red (Trump) Skittle to the appropriate space, and noted the offending lie—and the correct fact.

Here are the fact-checks that we collected tonight. Our final, but not definitive tally of the debate’s lies: 18 red Skittles for Trump, to 3 blue Skittles for Clinton.

TRUMP: Says Clinton wants to be able to take the baby out of the womb in the ninth month, on the final day.
FACT: Clinton does not believe this.
Source here.

TRUMP: Says no one knows who’s behind Wikileaks hacks
FACT: He’s been briefed by U.S. intelligence agencies that Russia was behind it
Source here.

CLINTON: I will not add a penny to the national debate
FACT: Debt is predicted to increase by $9 trillion over a decade
Source here.

TRUMP: Claims by women he assaulted them have been ‘debunked’
FACT: The claims have not been debunked
Source here.

TRUMP: Russia has taken over Middle East.
FACT: Russia has propped up Syria’s regime, but not the region
Source here.

TRUMP: 100 per cent of funds donated to Trump Foundation given to charity.
FACT: Not all donations were used for charity.
Source here.

TRUMP: Clinton will double American taxes
FACT: Most organizations agree it’ll be up by a few percentage points at most
Source here.

TRUMP: Illegal immigrants are treated better than veterans.
FACT: They are not.
Source here.