Unhinged Donald Trump no longer shocks, which is shocking

Anne Kingston: Omarosa's book represents a tipping point—the apparent normalization of the incivility ushered in by the Trump presidency 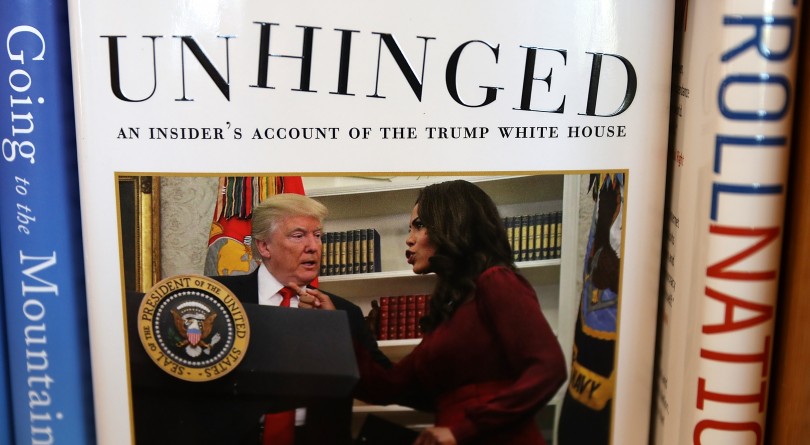 A new book by Omarosa Manigault Newman, "Unhinged: An Insider's Account of the Trump White House", is displayed on a shelf at Book Passage on Aug. 14, 2018 in Corte Madera, California. (Justin Sullivan/Getty Images)

One story in Omarosa Manigault Newman’s new book, Unhinged: An Insider’s Account of the Trump White House, neatly encapsulates the noxious melange of bigotry, misogyny, ignorance and shallowness that we’ve come to expect from the current president of the United States.

Like most stories involving Trump, it involves money, specifically a proposal made by the Obama administration to replace the image of former president Andrew Jackson on currency with that of African-American abolitionist Harriet Tubman. Omarosa—who’s one-name famous thanks to the cartoon celebrity imparted by reality TV—writes that, as the director of communications for the White House’s Office of Public Liaison, she sent Trump a memo urging him to honour Tubman.

Trump, a man so ignorant of civil rights history that he didn’t know the 19th-century abolitionist Frederick Douglass was dead, nixed the idea while taking a shot at Tubman, Manigault Newman writes: “While flipping through the folder, he came to the picture of Tubman, the woman who personally brought more than three hundred slaves to freedom, risking her own life every time, and said to me, ‘You want to put that face on the twenty-dollar bill?’ ”

Given the barrage of vulgar,  hateful remarks Trump is known to have made, particularly concerning women’s appearances, the tale is entirely plausible, despite Manigault Newman’s well-publicized “credibility” problem.  So is the book’s most explosive charge: that a tape exists of Trump uttering the “n-word,” a vile term of such singular resonance in the American lexicon it’s unimaginable that an elected official could utter it and remain in office (the CEO of a pizza empire stepped down recently for that very reason).  Yet White House press secretary Sarah Huckabee Sanders, who claims Unhinged is “riddled with lies and false accusations,” didn’t rule out the existence of such a tape.

READ MORE: What Donald Trump and Gwyneth Paltrow have in common

Unhinged, and the reaction to it, represents a tipping point in the Trump presidency: the apparent normalization of the incivility and authoritarianism ushered in by the Trump regime. Only eight months ago, the first White House spill-all—Michael Wolff’s Fire and Fury—was a runaway bestseller, created a sensation, and shocked with its depiction of an administration mired in chaos, backstabbing and rank incompetence of the sort previously limited to Armando Iannucci’s brilliant political satires. Now the public is conditioned to expect vile behaviour from Trump and White House staff, so much so that Manigault Newman’s book didn’t even hit number one on the best-seller list.

Unhinged makes outrageous claims destined not to raise an eyebrow. Are we surprised Trump egged Kiss frontman Gene Simmons to make sexual comments in front of his daughter Ivanka?  Are we surprised that Trump fired White House chief usher Angella Reid, the first woman and second black person to hold the position, because he was displeased with how she handled his order to bring a tanning bed to the White House?  (One day, if the world survives Trump, PhD. theses will be written about the president who emboldened white supremacists while simultaneously obsessed with darkening his skin). Are we surprised that the president has deteriorated mentally and is in poor health given his Coke-KFC diet? Are we surprised Trump calls Education Secretary Betsy DeVoes “Ditsy DeVoes”?

Manigault Newman, who thrived on The Apprentice, then its offshoots, as a character audiences loved to hate, was politically useful to Trump, first as the Director of African-American Outreach for his campaign. Her popping up in the White House bridged the worlds of reality TV and politics that is Trumpland, a place of zero loyalty, only shifting allegiances, filled with toadies, until they turn or are of no use.

In her new role as “whistle-blower,”  Manigault Newman also provides an example of the willful blindness of those who surround Trump.  “I am going to expose the corruption that went on in the campaign and in the White House. I’m going to continue to blow the whistle on all of that,’ she told MSNBC. What no one has asked her is:  Why, seeing what she saw, knowing what she knew, didn’t she leave sooner? Was it the $180,000 salary? Or the heady fumes of being close to the power nexus, the apparent reason Trump’s Republican flunkees don’t defy him. Manigault Newman writes that learning of the “n-word” tape was the breaking point for her. Yet she didn’t quit, even then. In her book, she reports she was fired by White House chief of staff John Kelly, a meeting she secretly taped, and played on NBC’s Meet the Press this week.

READ MORE: What it’s like to be deported from Trump’s America

As Trump’s “apprentice” she learned disloyalty from a master. Yet, given the lack of  outrage over the book, she might as well still be on the payroll. When an “n-word” tape is released, we’ve been primed to the point it’s been argued it won’t make a difference.  Wall-to-wall  Omarosa on talk shows has sidelined the parade of more damning Trump news, including Paul Manafort’s trial now in jury deliberations, Trump revoking ex-CIA director and Trump critic John Brennan’s security clearance, while threatening to do the same to others, along with his continuing ethical breeches, including offering discounts to White House staff at his golf properties and exploiting the presidency for profit.

Trump’s ugly reaction to Unhinged is also sadly familiar: he attacked his associate of 15 years, someone he appointed as a liaison with the public, calling her a “lowlife” and “that dog” on Twitter. We were reminded again of the horrifying fact that the ostensible leader of the free world bases decisions solely on his ego. He thought Manigault Newman was “vicious, but not smart” and “nasty,” he tweeted, but insisted she stay despite Kelly’s objections because she flattered him: “I told him to try working it out, if possible, because she only said GREAT things about me—until she got fired!”

As a capper to the now-normalized insanity, Michael Cohen,  Trump’s former personal lawyer now under criminal investigation for tax fraud, went on Twitter to deny Manigault Newman’s claim that Trump swallowed a note from Cohen to destroy “sensitive” information. Cohen was “shocked anyone would take this seriously,” he said.

That’s backwards, as much is in Trumpland: the fact that it’s not unreasonable that people might take such an absurd story about the U.S. president seriously is in itself shocking. The fact that Trump, a shameless grifter with authoritarian ambitions, has lost his capacity to shock or outrage is equally shocking—and a dire day for democracy.