What happens if Donald Trump quits?

Scott Gilmore: Leaving office would be easy, but the job for President Pence of rebuilding the nation and its reputation would be monumental 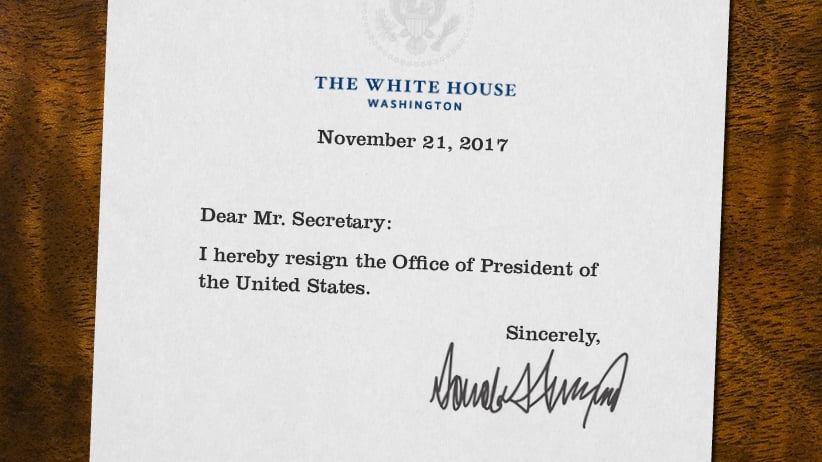 A few months ago, the idea of Trump resigning was just a liberal fantasy—denial as the first stage of grief following the death of the Hillary Clinton candidacy. But the president’s rambling and outraged speech last night in Phoenix reminded us that his sudden departure is not impossible

Trump’s rally, even by his own standards, was a remarkably disjointed and angry attack on the media and his own party. He argued he was the real victim of the Charlottesville protests. He mocked both of Arizona’s Republican senators. He mused about cancelling NAFTA, threatened to shut down government and boasted about legislative “triumphs” that did not exist.

Republican strategist Rick Wilson described the event as “an astounding chain of lies tied together by lunatic asides by a man who obviously is unstable.” This was an elderly man, either disconnected from reality or unwilling to face it, who was isolated, angry and miserable. Donald Trump is not enjoying the job.

Earlier this week, Tony Schwartz, Trump’s ghostwriter for his book The Art of the Deal, predicted that the president would resign before the end of the year. This is a theory that is being increasingly shared by many other pundits and strategists who think the president will want to find a way out before either his tax returns or Special Counsel Robert Mueller’s Russia investigation forces his hand.

The bookmaker Ladbrokes is now seeing large sums being bet on an early departure, and it recently readjusted the odds that Trump will not complete his first term to 50/50. I personally think the chances are considerably lower than that. An impeachment process would likely not start until after the 2018 midterms and could drag on into 2020. And while I can imagine the scenario where Trump decides to suddenly declare victory and quit, I don’t yet see a plausible exit ramp that allows him to save face. Nonetheless, we have now reached a point where we should be seriously considering what would happen if the president did resign.

It would probably be sudden. While becoming president of the United States is one of the most difficult and complicated processes in the world, it is surprisingly simple to walk away from the job. Richard Nixon did it with a one-sentence note to his secretary of state. Given Trump’s impulsive nature, it is quite possible that he could arrive at the decision and execute it with a tweet moments later. He is not in the habit of consulting widely, although it is possible he might muse about a resignation with White House staff. But for all of us, and most of the people in his administration, it would likely come out of the blue.

Immediately, possibly within minutes, regardless of where he is in the world, Vice-President Mike Pence would be sworn in as the 46th president of the United States. Trump’s nuclear codes would be swapped to Pence, and with remarkable swiftness, the Secret Service, the White House, the press corps and the entire administration would suddenly pivot toward President Pence.

But other than the new name on the letterhead, immediate change might be hard to see. Pence would come to office with no identifiable personal agenda, no popular mandate and no political base. Trump’s vocal supporters will inevitably react to a resignation with anger. (I can picture Alex Jones’s head literally exploding on air.)

The conspiracy theories about the “swamp” and “cosmopolitan elites” are already being floated. Even in the mainstream media there would be questions about whether Trump’s departure is serving or subverting democracy. Online Russian disinformation campaigns would work overtime to feed the uncertainty and the anger.

In an effort to defuse this turmoil, the new Pence administration would probably try to project continuity. His time as a congressman would make him understand the importance of his fellow Republicans on the Hill, and it is reasonable to predict his first move on his first day would be to huddle with the GOP leadership.

READ MORE: Donald Trump is hurtling the world towards crisis. He needs to go.

The Cabinet would remain untouched at least in the short term. An effort would be made to prioritize Trump issues that were shared by Congress (like tax reform). More difficult but nonetheless popular elements of Trump’s electoral platform, like the wall, will get lip service. But it is hard to imagine much political capital being spent on them. Likewise, NAFTA would be safe once again, as would NATO—both being well supported by the party leadership.

America’s international influence would bob up like a cork overnight. It seems unlikely that the United States will ever be able to reclaim its post-Second-World-War leadership role among Western allies that disappeared so quickly after inauguration. And much of Washington’s power has leached away to the state and municipal level, especially on climate and trade. But some of that damage is repairable, and America would return to being much needed, if not indispensable.

Ironically, even a resignation will not save Trump from himself. It would be politically explosive for President Pence to bring an end to the Mueller investigation. I think we can take some comfort in believing that one way or another, the truth will come out. A pardon in the cause of national unity, however, is quite possible—even for the most egregious of crimes. This may not only be wise but necessary.

Pence would be faced with the almost impossible task of rebuilding the stature of the presidency, reinforcing national institutions and bringing together a divided nation. Even the most capable leader would find this task monumental, and Pence did not excel as the governor of Indiana. Regardless, fortunately or unfortunately, it is increasing likely we are going to find out if he is up to the task.