What to expect when Trump and Pelosi are squabbling like toddlers 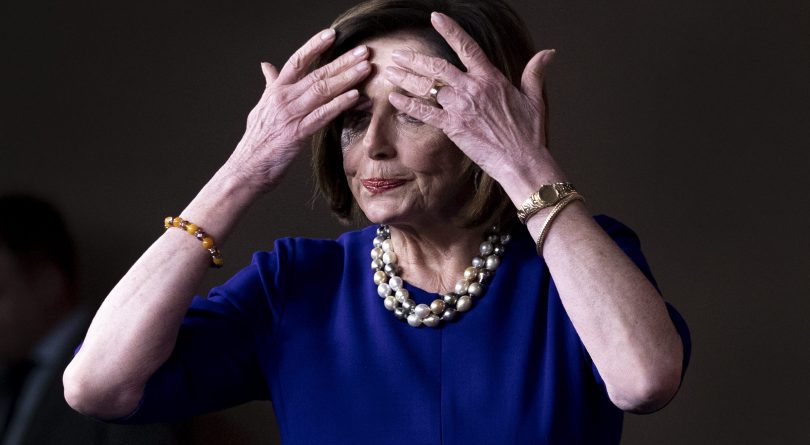 Pelosi touches her hair as she arrives to hold a news conference Thursday in the U.S.Capitol (Michael Reynolds/ EPA via CP)

“It doesn’t take much for little ones to realize that acting out gets them a lot of attention,” the writers of the bestselling instructional manual entitled What To Expect: The Toddler Years inform new parents at the end of their rope. “Sometimes fighting toddlers find their own solution to a squabble, and that’s a good thing. As long as no one is getting physically hurt, give the children a minute or two to work things out—they just may surprise you.”

It had been a lot longer than a minute or two since Speaker Nancy Pelosi conspicuously shredded her hard copy of Donald Trump’s State of the Union Address on Tuesday night, and there still was no sign of cooperative play in America’s toxic sandbox. In fact, as Thursday afternoon arrived—a full 24 hours after Trump’s formal acquittal on the two articles of impeachment that Pelosi had green-lighted—the rug rats were as out of control as ever.

“The president doesn’t like Nancy Pelosi,” grandfatherly Steny Hoyer, the Democratic leader in the House of Representatives, had explained on Wednesday, neatly condensing the pre-K state of affairs, “and Nancy Pelosi’s not wild about Donald Trump.”

RELATED: What made Nancy Pelosi go on a tear

“Speaker Pelosi had a tantrum,” retorted Liz Cheney, the Republican conference chair. “She disgraced herself and embarrassed the House. She proved again that she is unfit for office.”

“America saw an incorrigible child ripping up the State of the Union,” Kellyanne Conway, the president’s eager mouthpiece chirruped. Ms. Conway opined that Speaker Pelosi “looked like she was reading the Cheesecake Factory menu all night going through every single page.”

On Thursday, the mutual insults continued. The first event of the day for both of the squabblers was the annual National Prayer Breakfast at the Washington Hilton, which, of course, is the hotel where Ronald Reagan got shot, so it could be a lot worse.

(“I don’t want to go into the target that I am,” Nancy Pelosi said Thursday. “There are people out there ..” At the same hour, Capitol police were investigating “a suspicious substance” in the office of Congressman Adam Schiff, the Democrats’ verbose, plaintive, and ultimately futile prosecutor-in-chief. The all-clear came just before noon. The most suspicious substance on Capitol Hill these days would be humility.)

Donald Trump walked into the Hilton last, as befits the Free World’s chieftain. At her table, ever the lady in purple and pearls, Nancy Pelosi stood and applauded. Then the president spotted a copy of USA Today with a one-word headline: ACQUITTED.

RELATED: Behold Donald the Great, unconvicted and brimming with optimism

Trump picked up the newspaper and brandished it lovingly, like Raymond Bourque after he finally won the Stanley Cup. Then he went to work on Pelosi and Mitt Romney, the practising Catholic and the reverent Mormon who, respectively, had brought him to trial and, alone among the docile Republican sheep, had voted to remove him from office.

“Speaker Pelosi appeared to shake her head when the president said the last line,” a pool reporter at the breakfast filed.

“I meant every word,” beamed Donald Trump, later in the day.

An hour after the prayer breakfast ended, Nancy Pelosi returned the favour. At her weekly press conference in the Capitol basement, she said that tearing apart the president’s text—“a manifesto of mistruths,” she called it—was the “most dignified” response she could think of in the moment, having resisted “other urges within me” that she did not specify.

She said that she thought that Donald Trump “looked sedated” on Tuesday night.

“I have tried to be gracious to him,” the speaker said. “I am always dignified. I don’t need any lessons from the president of the United States about dignity.”

“I don’t know if the president understands prayer or people who do pray,” she went on. “I pray hard for him because he’s so far off the track. He can say whatever he wants, but I do pray for him, softly.” 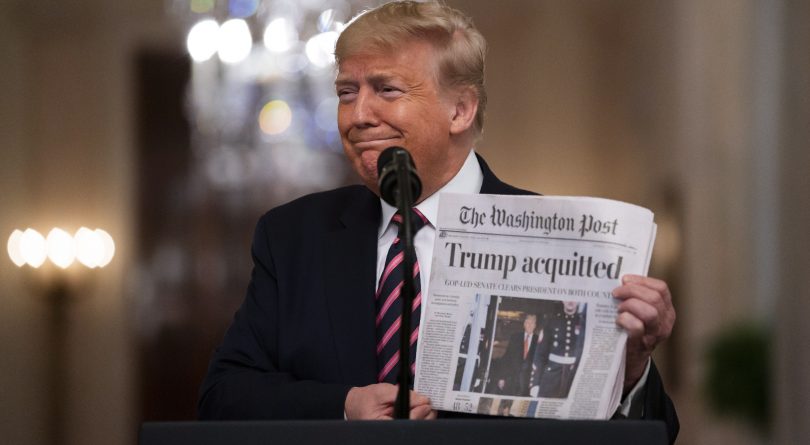 “There is no such thing as eternal animosity,” she professed. “There is only eternal friendship. I extended the hand of friendship to him.”

“That meant nothing to me,” said Nancy Pelosi.

“I feel very liberated,” she smiled. Then she said the same words again.

“Could you and the president ever work together again?” a reporter asked.

“Well, that would be up to him,” sniffed Nancy Pelosi.

At the White House at midday, Donald Trump took a victory lap in a speech that lasted an hour and a half but that could be condensed into four typically Trumpian words.

The impeachment, Trump said, was “all bullsh–.”

The impeachers,” were “bad people.”

Oh, and James Comey, the FBI director he fired, was “a sleazebag.”

“I’m sure that Pelosi and Cryin’ Chuck Schumer will try to cook up other things,” predicted Donald Trump.

“If they find me walking across the street and it’s against the light,” said the leader of the Free World, “we’ll probably have to do it again.”

Then he said that Pelosi and Company were “evil and sick” and went off to confabulate with the president of Kenya.

Three years into the Trump-Pelosi melodrama, those who would suggest that both leaders might benefit from a good paddling will be disappointed. What to Expect: The Toddler Years advises that “Spanking fighting toddlers would not only send mixed messages about violence, but also undermine their feelings of security and their bourgeoning self-esteem.”

Absent corporal punishment, a Maclean’s correspondent in the Capitol sought the expert counsel of Congresswoman Frederica Wilson, Democrat of Miami, grandmother of five, and a former elementary-school principal.

“What if you had two pupils who didn’t get along named little Nancy and little Donnie?” Rep. Wilson was asked.

“I’d give them a project to work on like infrastructure,” Rep. Wilson replied. “Just put the two of them in a room all by themselves and they can’t come out until they come up with a bill together.”

“What about a ‘beer summit?’” it was suggested. (Barack Obama was an avid proponent of beer summits in his day.) “Even though Donald Trump doesn’t drink.”

“That’s what he says,” the Congresswoman-principal responded. “But he acts like he’s drunk all the time!”