It's a possibility on everyone's mind. The big question now is: how would his rabid, gun-owning supporters react to an attack on their leader? 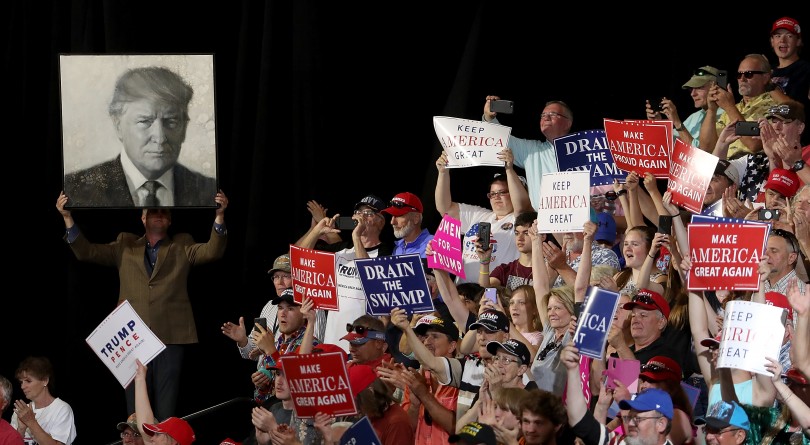 It’s hard to get through a single day in a Donald Trump news cycle without a certain subject popping up: impeachment. The list of those calling for Trump’s premature political demise now includes Democratic lawmakers, political candidates, celebrities and at least one billionaire. This month, Walmart removed “Impeach 45” T-shirts from its stores amidst threats of a boycott.

What began on the fringes is now—at least among the politically engaged—“on everybody’s lips,” said Allan Lichtman, a history professor at American University in Washington, D.C., who’s predicted every presidential winner since 1984 and who argued Trump would be impeached back in the spring of 2017 in his book The Case for Impeachment.

Robert Mueller is one key reason for the impeachment talk. The special prosecutor’s investigation into Russian ties to the Trump campaign has racked up indictments and headlines to the point that many Americans are becoming convinced, well before the final results, that Trump should be impeached. A June poll found 42 per cent of Americans believe Trump should be impeached, one per cent lower than the number that supported Richard Nixon’s impeachment (in a 1974 poll) and well above that for Bill Clinton, something Lichtman deemed “absolutely extraordinary.”

Impeachment is the political exit ramp embedded in the Constitution which allows the House of Representatives to articulate crimes against a president (articles of impeachment) and vote on them (being impeached), after which the Senate transforms into a court for a trial (two-thirds of which is needed to convict). Sometimes the threat of impeachment is enough to force a resignation (Nixon), sometimes actually being impeached isn’t enough (Clinton was acquitted by the Senate).

In Trump’s case, impeachment would require the Democrats to take control of the House in the November midterm elections. Some, including the surprise winner of a New York Democratic primary, Alexandria Ocasio-Cortez—are campaigning on it.

Chris Buskirk, an editor and publisher of the journal American Greatness and host of a conservative talk radio show in Arizona, considers the effort self-defeating, or worse. “The more Democrats push the impeachment narrative, the more they drive up Republican turnout and make what they want less likely,” he said, an argument echoed by the conservative writer David Frum in a piece exploring the impeachment benefit for Republicans, including among reluctant Trump voters wary of “non-stop scandal politics”.

But Buskirk has even broader concerns. Trump’s base—at this point synonymous with the GOP’s—is not just extremely loyal to the president, it gets rattled every time Democrats push the impeachment narrative, he warned. Trump’s supporters view—and to a degree, so does he—the Mueller investigation as a “political vendetta,” an argument long and resoundingly made in right-wing media (Fox News host Sean Hannity considers it a legal war and a witch hunt; Trump lawyer Rudy Giuliani a lynch mob and an effort to frame the president).

READ MORE: Time for a moratorium on summits: The Trump Pause?

Impeachment based in any way on Mueller’s investigation “would be seen by a large percentage of the electorate—half, I would think—as illegitimate,” Buskirk said. “That’s a dangerous path for any country to go down.” Asked if he thought impeachment could be seen as some kind of coup, he answered, “I hope we don’t find out.”

The right-wing provocateur Roger Stone has been characteristically less guarded. He warned in April of a “spasm of violence in this country, an insurrection like you’ve never seen… A politician that votes for it would be endangering their own life.”

And while his views are considered far from the mainstream (to be generous), the threat of violence, however small, is on others’ minds.

In a particularly alarmist episode last month of Real Time with Bill Maher—the comedian’s political talk show on which he regularly argues the country is sliding into fascism—Col. Lawrence Wilkerson, a retired army colonel and chief of staff to the former Republican Secretary of State Colin Powell, recounted a surreal conversation with a lawmaker.

He had been meeting with a senator in Washington (whom he won’t name), when the senator asked his staff to leave the room and posed a private question: Suppose Trump and the GOP took massive losses in midterms and impeachment proceedings began with haste. Would Trump call his supporters, and their guns, into the streets? Would he even need to? And: What would the military do?

“My frank and candid answer was I have no idea,” Wilkerson later told Maclean’s, “but you’ve posed a Constitutional crisis of the first order.”

Wilkerson, describing the underlying context of the question, noted that a majority of Americans who own guns, and particularly those who own many guns, vote Republican. He pointed to broad support for Trump within military families and communities, and expressed particular concern over the small and extreme Dominionist wing of Evangelicalism, which he dubbed “the American Taliban” or even “American ISIS,” a sect of “religious zealots” who “profess to want to take over the armed forces of the United States and use them for God” and who “proliferate in the chaplains core of the military.” (Col. Wilkerson is part of the All-Volunteer Force Forum, a network that examines military demographics and argues a volunteer military force is “unfair, inefficient, and unsustainable”.)

But he put the chance of such an event “less than miniscule,” especially since he expects the Democrats will lose seats in the midterms. William Sommer, a journalist at The Daily Beast who covers conservative media, shares that prognosis, but he added that the impact of impeaching Trump would be “crazy.” “I think you’d see a lot of protests, and then there’s the larger issue: Are you driving people to political extremes on the right? I could see the resurgence of the militia movement.” Consider, he added, last year’s violence in Charlottesville.

To Lichtman, the professor of history, the Democratic leadership’s reluctance to push for impeachment looks like misplaced fear. “I think they’re afraid of a backlash, they’re afraid of being too far out front,” he said. “We can’t let our Constitution been dictated by the whims of a rogue president. That would defeat the very purpose for which the framers put impeachment into the Constitution.”

He’s confident the Mueller investigation will bring damning evidence against Trump, leading not only Democratic voters to demand his impeachment, but Republicans, as well. Trump, he said, may like to fight, but he’s also “very, very lazy and an impeachment fight is a long haul fight.” The process can take months, a slog which could suck the oxygen out of protests from his base, he added.

“We’ll grow weary of it. Basically Trump has one big thing going for him, that’s the economy,” Lichtman said. “Think of what it would happen if the economy goes sour, which it well could after all the fighting with Canada. A lot of that fervent Trump base would melt away.” No matter what they make of Mueller or the Democrats, “if he’s impeached in the midst of a economic downturn, he’s toast.”