What will happen if Trump is convicted in an impeachment proceeding

With the U.S. president now thumbing his nose at Congress, it's not as far-fetched as it was mere weeks ago 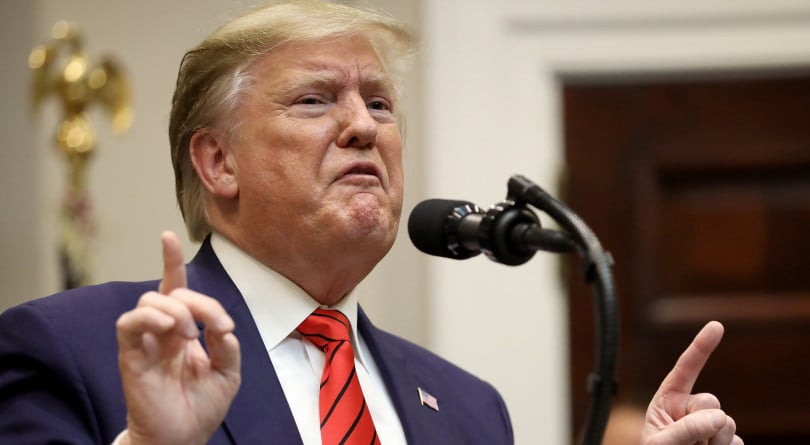 Trump at an event on Wednesday for the signing of two executive orders aimed at greater governmental transparency. Earlier, the White House had said it would not co-operate with the House impeachment inquiry. ((Photo by Win McNamee/Getty Images)

There is no precedent for kicking a U.S. president out of the Oval Office.

If Donald Trump is indeed impeached by the House of Representatives, convicted by the Senate and subsequently removed from office, there is a best-case scenario for the peaceful transition of power.

“He graciously accepts it, invites the vice-president over to take the oath of office, and quietly goes back to Trump Tower in New York,” says Frank Bowman, a University of Missouri law professor and author of the book High Crimes and Misdemeanors: A History of Impeachment for the Age of Trump. “Now, I don’t really expect that to happen.

There is also a worst-case scenario, one made all the more worrisome by the president tweeting it out to his 65 million followers, when he quoted the evangelical pastor Robert Jeffress on Fox News, writing: “If the Democrats are successful in removing the President from office (which they will never be), it will cause a Civil War like fracture in this Nation from which our Country will never heal.”

….If the Democrats are successful in removing the President from office (which they will never be), it will cause a Civil War like fracture in this Nation from which our Country will never heal.” Pastor Robert Jeffress, @FoxNews

So what could happen if Trump were convicted in an impeachment proceeding?

For starters, it’s still possible Trump could remain president despite a conviction, according to Saikrishna Prakash, a law professor and senior fellow at the Miller Center at the University of Virginia. “The constitution says, basically, the sanctions shall extend to no further than removal from office and a bar from holding office,” says Prakash, an expert in constitutional law and impeachment. “It leaves open the question whether there’s some sanction less than those.”

Some alternatives he’s heard floated include forcing the president to forfeit his salary, or even requiring that someone from Congress be in the room for every talk with a foreign leader.

But if the Senate votes to remove Trump from office, there would be no delay before President Trump becomes Citizen Trump. “I would say the minute the verdict goes down, he’s gone,” Bowman says. “It all goes down Pennsylvania Avenue; somebody gets a Bible and swears in the vice-president.”

Still, no one can say for sure how it would work, logistically, because it’s never been done. Richard Nixon resigned before the House could vote to impeach him. Bill Clinton and Andrew Johnson remain the only presidents ever impeached, but the Senate voted against convicting them and they stayed in office for the remainder of their terms.

RELATED: The Democrats put the i-word—impeachment—back on the table

To be sure, Trump’s removal from office is deemed by experts to be a long-shot. Even if he’s impeached in the Democrat-controlled House of Representatives, a two-thirds vote in the Senate is required to convict someone on articles of impeachment, and the Republicans hold 53 of the 100 seats in that house. In short, 20 Senate Republicans would have to vote against the president.

So far, Senate Republicans have shown astounding fidelity to the president. But that unity has cracked in the face of Trump’s refusal to co-operate with Congress, and trembled further with his abandonment of Kurds who were allied to the U.S. during the war in Syria.

And there’s no telling what dirty laundry might come to light during an impeachment trial, especially regarding Trump’s alleged pressuring of the Ukrainian president to investigate Democratic presidential frontrunner Joe Biden, and how that might impact how senators think about impeachment. The Senate’s most senior Republican, Chuck Grassley, recently broke from party ranks when he defended whistleblower protections at a time when Trump wants the Ukraine whistleblowers’ name made public. Meanwhile, former GOP Senator Jeff Flake said that 35 Republicans would vote to remove Trump—if the vote were secret.

A secret ballot is possible, albeit highly unlikely, explains Michael Gerhardt, a University of North Carolina law professor and author of Impeachment: What Everyone Needs to Know. “It is true that Senate proceedings were not open to the public until early 20th century, which means earlier impeachment trials were only open to the public to the extent [they] allowed them to be. That senators are now directly elected likely makes it more difficult to keep the votes hidden from voters.”

Trump’s base would certainly get riled up over his removal. “Is there some danger some people would become violent?” says Bowman. “Sure. I think that’s been made more acute by Trump encouraging that type of talk among his base, many of whom proudly own weapons. But civil war? Nah.”

It is generally assumed that no military commanders would support a rogue former president who’s just been impeached and removed from office by Congress—they’re sworn to uphold the U.S. Constitution, after all. Trump could try to act pre-emptively, before removal in his role as commander-in-chief. “He could try to do any number of things,” Prakash says. “Whether they are legal is another thing.”

If Trump resisted an effort to remove him, Bowman adds, “I’m deeply skeptical he would get anywhere. What are White House staff and the Secret Service going to do? Will they honour the Senate conviction? If he’s removed from office, I don’t think bureaucracy can accept him as president. If he tried to stay, they’d just escort him out.”

Once Trump is removed from office, there’s still the possibility—however unlikely—that he could run again for president in 2020. That’s because the Senate’s vote to remove someone from office is separate from their vote to bar someone from run for public office again.

RELATED: Trump’s betrayal of the Kurds spurs the drumbeat to end his presidency

Take Alcee Hastings as an example. The former U.S. district court judge was impeached in the late 1980s and removed amid charges he was soliciting bribes in exchange for reduced sentences. But the Senate did not hold a vote on whether he should be disqualified from holding future office—and he would be elected a couple of years later to the House of Representatives. He still holds office today.

If the Senate does bar Trump from running again, then Trump will have reached the end of the line. “The final word is with the Senate,” says Gerhardt. “Trump can try to file a lawsuit claiming he didn’t get fair process or there’s deep state conspiracy against him, but that won’t overturn a Senate conviction and removal.”

Nor can he appeal the ruling, experts say, despite his insisting he’d head straight to the Supreme Court.  A judge named Walter Nixon once tried to appeal his impeachment conviction, and “the Supreme Court basically said the final word rests with the Senate,” Gerhardt adds.

In this scenario, Trump would be gone from the landscape of presidential politics. And what if Trump simply refused to leave the Oval Office?

“The president will be Mike Pence, and the first question will be whether the Pence will use his authority to haul Trump out of there,” Gerhardt says. “If Pence refuses, at this point we’re well into uncharted territory.”