Whatever is a moderate Democrat to do?

U.S. Politics Insider for Feb. 13: Bloomberg buys up ad space, even memes; Iowa fallout continues; and should Nevada be the new Iowa? 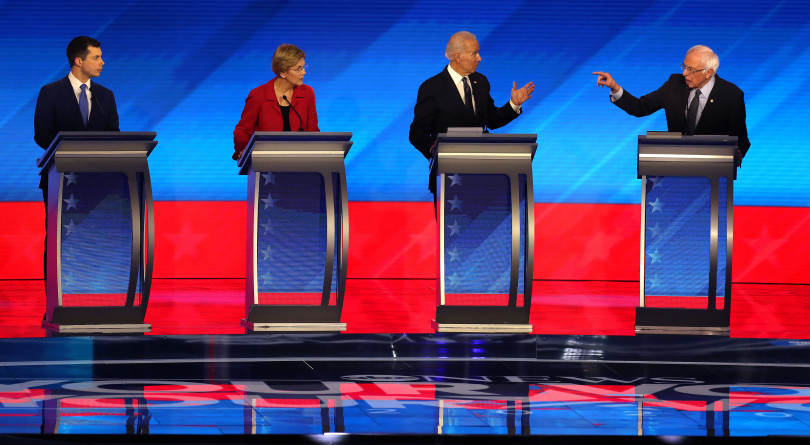 Moderate Democrats still looking for a unity candidate: At a point where some primaries might be down to two viable candidates, the Democrats have several. One reason, an Associated Press poll revealed, is that moderate Democratic primary voters have been splintering among various candidates: when Joe Biden began to demonstrate weakness, some moderates voted for Pete Buttigigeg in New Hampshire, while others made a last-minute decision to switch their vote to Amy Klobuchar after she suddenly emerged as a viable candidate. Biden was still the choice of voters who particularly long for a restoration of the good old days of Barack Obama’s presidency, while Elizabeth Warren did well among voters who consider it a priority to finally elect a female president. Perhaps surprisingly, a majority of New Hampshire’s Bernie Sanders voters said they’d be all right with a Buttigieg presidency—even some liberals have a moderate streak.

Bloomberg’s meme factory: One name that wasn’t on the AP’s poll, but may scramble the results among moderate voters, is Michael Bloomberg, who is skipping the early states and plans to make his debut on the ballot in March. Meanwhile, his campaign is buying up every kind of advertising time, including memes. Bloomberg 2020 is partnering with a startup called “Meme 2020,” run by the man who runs the social-media advertising site Jerry Media. The strategy is to partner with various popular Instagram accounts: they post Bloomberg advertisements in the form of sponsored content and send them out to their millions of followers. The advertisements sometimes make fun of themselves for being a blatant attempt by an old man to reach out to young people: one post, from an account with over 2 million followers, is in the form of a Bloomberg text asking the account to “make me look cool for the upcoming Democratic primary.” But self-mocking advertising is still advertising.

A casualty of Iowa: The fallout from the faulty reporting of the Iowa Caucuses continued on Wednesday, as the chairman of the Iowa Democratic Party, Troy Price, released his letter of resignation. While praising the work his staff did to finally pull together a result—and mentioning that they endured “threats to personal safety, taunts, and anger from people around the globe”—he concluded by saying that he needed to step down so that the party could concentrate on making Democrats competitive in November.

Make Nevada the new Iowa, says former top Democrat: Will Iowa actually lose its first-in-the-nation status, as many people speculated after Feb. 10? One person who thinks it should happen is Harry Reid, former leader of the Senate Democrats, who still wields a lot of power and influence within his party. In an interview with Vice, Reid said:  “Iowa has forfeited its chance to be number one,” though he immediately segued into saying that that honour should go to his own state of Nevada, which also uses the caucus format. Even retired Senators are always thinking about how to bring extra business to their home state.