Why does Inauguration Day take place on Jan. 20? 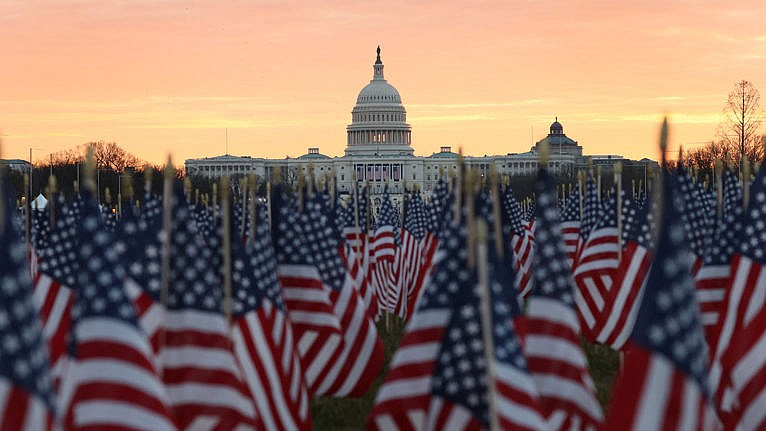 The U.S Capitol Building is prepared for the inaugural ceremonies for President-elect Joe Biden as American flags are placed in the ground on the National Mall on January 18, 2021 in Washington, DC. The approximately 191,500 U.S. flags will cover part of the National Mall and will represent the American people who are unable to travel to Washington, DC for the inauguration. (Joe Raedle/Getty Images)

Editor’s note: An earlier version of this post appeared as part of an FAQ series on the occasion of Donald Trump’s inauguration in January 2017. It has been revised an updated to include key recent events culminating in the storming of the U.S. Capitol on Jan. 6, 2021.

Why does the transfer of power from one president to another happen on Jan. 20?

It used to be March 4, coinciding with the day the United States started to govern under its Constitution in 1789. Back then, the lengthy period from Election Day in November to the inauguration allowed time for the incoming president to get his ducks in a row.  Before the invention of the telephone or automobile, the grace period made sense.

That’s not to say the long wait raised no problems; for example, Southern states began declaring secession and Southerners began seizing forts and garrisons during the waiting period before Abraham Lincoln was officially sworn in on March 4, 1861, setting the stage for the Civil War.

But for the most part, U.S. presidents—outgoing and incoming—have used the “lame duck” period in good faith, helping organize and even celebrate the  peaceful transition of power that is supposed to be a hallmark of a democratic republic.

The Trump era has proven, among many other things, that is no guarantee: in the weeks following the election, the outgoing president and his supporters papered the courts with challenges to the outcome. When that failed, Trump riled his supporters with claims the election was rigged, and egged them to come to Washington to oppose the counting of the electoral vote. There, he delivered a speech inciting them to storm the Capitol.

So the risk of an overly long transition has come into sharp relief.  The 20th Amendment moving the date from March passed in 1933 not only because of the advancement of technology but also because the country was going through the Great Depression; a longer wait for incoming President Franklin D. Roosevelt to take over from Herbert Hoover meant waiting another six weeks to address the crisis.

The amendment pushed the inauguration up to Jan. 20 at noon. (Why noon? No explanation. That’s just the time chosen and written in the Constitution as the official end point of the outgoing president’s term.)

Not surprisingly, many are now wondering whether America’s waiting period from Election Day to Inauguration Day remains far too long. It took France only one week to swear in Emmanuel Macron as president after his 2017 victory. In Canada, it typically takes about two weeks from the election date.

The best that can be said for the existing system in the U.S. is that it has held up under Trump’s assault—barely. Should everything go according to plan, his last second as commander-in-chief will be 11:59:59 am on Wednesday.