Women to watch as female candidates seek to tip the U.S. midterms

A record number are running, and some are fighting the elections' most pivotal and dramatic battles 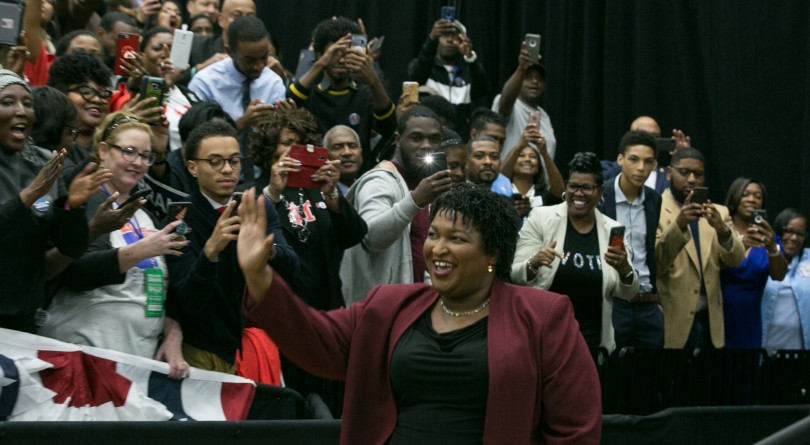 Stacey Abrams at a rally at Morehouse College in Atlanta, where she was joined by with former U.S. president Barack Obama (Photo by Jessica McGowan/Getty Images)

This may be the most important U.S. election of your lifetime—it’s a common message on both the political right and on the left and, perhaps, the prevailing view within the surge of more than 30 million Americans who cast early ballots before Tuesday’s midterm elections.

But for women, it’s all but guaranteed to be a groundbreaking election. Control of Congress and state legislatures are up for grabs, and of course, the fate of the Trump era. And if the Democrats secure major victories, they’ll need to thank a highly mobilized base of female voters and an unprecedented number of female candidates.

In the House and Senate races, a record 262 women are still in the running; only 60 of them are Republicans. (Emily’s List, which recruits pro-choice Democratic women to politics, has signed up more than 42,000 women since the 2016 election.) In competitive races for the House—which the Democrats are widely expected to flip—the most common match-up is between a Democratic woman and a Republican man.

Thank the confluence of Hillary Clinton’s failed presidential bid, Donald Trump’s victory, the Women’s March, the #MeToo movement and a hyper-polarized nation for this historic moment when the overwhelmingly white man’s game of politics is likely to experience a dramatic makeover—not just in the image of more women, but in the image of more minorities, too. Let’s begin with one of the biggest political stories of the year: Stacey Abrams.

It’s no accident that one of Donald Trump’s last campaign rallies before the election took him to Macon, Ga. on Sunday afternoon to stump for Republican candidate for governor Brian Kemp and—far more aggressively—against Abrams, the Democratic candidate.

RELATED: One side of this road is Republican, the other Democrat. Now it’s a battle line.

Abrams is vying to become the first ever African-American woman elected to a governor’s office in the U.S. She’s benefited from a ground game focused on turning out first-time voters, especially voters of colour, and she’s campaigned as one of the rising progressives in the Democratic Party, pushing for gun reform and expanded health care, and earning major endorsements: Oprah Winfrey knocked on doors for her, and Barack Obama gave an impassioned stump speech.

The race has become a proxy for the fight over voting rights in America. Kemp, who’s also Georgia’s secretary of state and the top elections official, recently lost a crucial lawsuit over alleged voter suppression (he’s responded by launching an investigation into Abrams’s campaign). Polls give Kemp a slight advantage. But the race remains tight. If Abrams wins, her victory will be viewed as a model for a new Democratic strategy to win in the South.

In another race emblematic of a possible Southern blue insurgency, Lizzie Pannill Fletcher, the Democratic candidate for Congress in Texas’s 7th district, is in a toss-up race with Republican incumbent John Culberson. Fletcher, a lawyer, is a first-time candidate hoping to flip a seat once considered a Republican stronghold in a race that’s being viewed—as so many are—as a referendum on Trump. She’s hoping to woo a demographic that could be key for many Democrats pitching to suburban voters: white college-educated women. In the final NBC-Wall Street Journal poll before the election, that group favoured a Democratic congress by 28 points, 61 percent to 33 percent.

Democrat Gina Ortiz Jones is running a tougher race in Texas’s 23rd district against Republican Will Hurd. The former Obama administration official has a two in nine chance, according to the data site FiveThirtyEight, but if she won, she’s be the first Filipina in Congress.

In Arizona, the state that brought us Sheriff Joe Arpaio, the Senate seat formerly belonging to Trump punching bag Republican Jeff Flake could be on the verge of turning blue. Few predict the Democrats have a shot at taking control of the Senate, but wins in races like this would be key. Polls give Democrat Kyrsten Sinema a slight lead over Republican Martha McSally. If she wins, Sinema, who’s viewed as a moderate Democrat, will be the first openly bisexual member of Congress and Arizona’s first female senator.

In a rarer story of a Republican woman on the verge of making history, South Dakota is projected to elect its first female governor in Kristi Noem, a win that would say a lot about Trump from the entirely opposite perspective—that of his deep popularity among the Republican base, and his ability to help women win, as long as that woman is loyal to Trump. A recent poll found that 94 per cent of Noem’s supporters approve of Trump’s performance as president. Trump joined Noem at a fundraiser in September, and as a member of the US House she’s voted in lock-step with his agenda 92 per cent of the time.

A few other races to watch feature Democratic women in nail-biter contests against incumbent Republican men: Abigail Spanberger, a former CIA officer, has a four-in-nine chance of flipping Virginia’s 7th district and she earned national attention after she slapped down her opponent, David Brat, for his refusal to refer to her by name. In Kentucky, former Marine Corps pilot (and viral video star) Amy McGrath is running a feminist, progressive campaign in a toss-up race against incumbent Republican Andy Barr. And in the closely watched bid of Kara Eastman to win Nebraska’s 2nd congressional district, Democrats are looking to see whether she can beat incumbent Don Bacon without pivoting to the center (Eastman’s campaigning on Medicare for all, a $15 minimum wage and free college tuition). 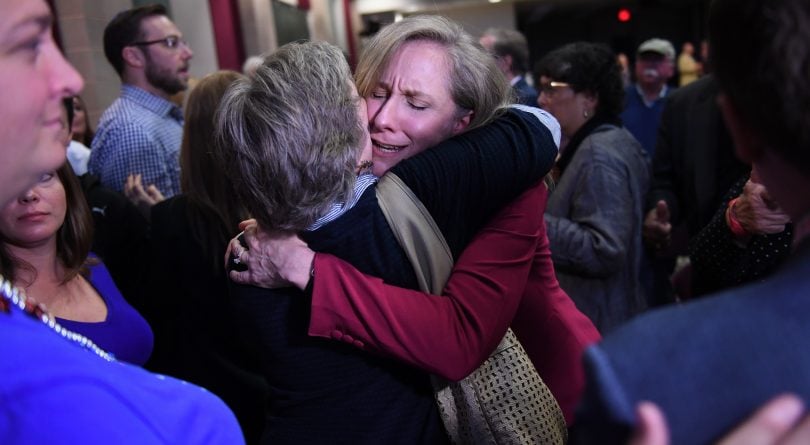 Abigail Spanberger with supporters after a debate in Culpeper, Va. (Photo by Matt McClain/The Washington Post via Getty Images)

Then there are the Democratic women all but guaranteed victory: Alexandria Ocasio-Cortez, the star of the party’s dramatic swing to the left this election, who’s set to win New York’s 14th district and become the youngest woman ever elected to congress; and Ilhan Omar, a current state representative in Minnesota and progressive colleague of Ocasio-Cortez who’s running to flip the solidly red 5th district seat in Washington and who’s inches from becoming the first Muslim woman and first African refugee elected to Congress.

And beyond those with excellent chances, the nation is also watching races where Democratic women are expected to lose. One of the key features of the 2018 midterms is the sheer breadth of candidates Democrats are fielding even in races where they’ve traditionally had terrible odds—after Trump’s victory, there’s a sense that Democrats can’t afford to leave any seat unchallenged.

Paulette Jordan, a charismatic Democratic candidate for governor in Idaho with a progressive brand of politics is being watched for what her campaign says about a decidedly red state: Trump won Idaho by 32 points, but Jordan’s bid for governor has seen her align with the likes of Ocasio-Cortez and other progressive Democrats. She’s also running to become the first Native-American governor of any U.S. state and Idaho’s first woman governor. While FiveThirtyEight puts her chances at 1 in 20, attention to her candidacy has been focused not so much on whether she’ll win, but whether she’ll shift the state’s politics for elections to come.

Similarly, Christine Hallquist has been widely featured in national media in a race she’s projected to lose. Hallquist was the surprise victor of the Democratic primary for governor of Vermont, and despite that state’s blue reputation, voters are expected to re-elect Republican governor Phil Scott. Hallquist has drawn attention instead for being the first trans woman to win a major party primary for governor, and for the harassment and abuse she’s received on the campaign trail as a result.

Overall, the Democratic Party is widely viewed to be in good shape. They’ve out-fundraised Republicans. They’re projected to win the House. They’re also statistically more likely to pick up seats, since most midterm elections see losses for the president’s party. But Republicans have the benefit of structural advantages built into the system both by gerrymandered districts and by demographic shifts. For Democrats—especially in Republican strongholds such as rural areas and the South—turnout will be key, and turnout among women voters in particular. Democrats have a 27-point lead among women voters, according to CNN’s last poll before the election, with a 13-point lead overall. Progressive, Democratic and religiously unaffiliated women are the most fired-up electorate. Women voters are the other side of the so-called “pink wave”—and they could decide this election.