What a 'kamikaze' mission reveals about Jason Kenney

Jason Markusoff: Should the Alberta UCP leader prevail, it's now fair to wonder where his ruthless impulse to crush will take him as premier 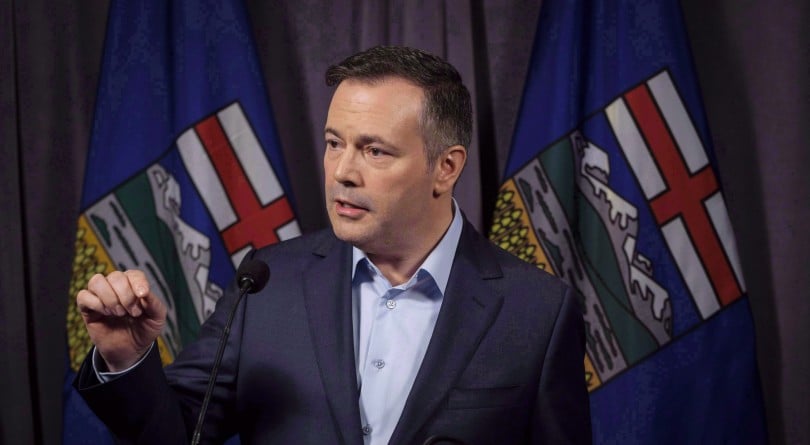 Kenney speaks at his first convention as leader of the United Conservative Party in Red Deer, Alta., on May 6, 2018. (THE CANADIAN PRESS/Jeff McIntosh)

Jason Kenney chose a complex, winding road toward the Alberta premier’s seat. It wouldn’t be enough, he reckoned, to defeat Rachel Notley’s unpopular NDP government by taking over one of Alberta’s right-of-centre parties—he had to smush them together.

At the United Conservative Party’s convention last spring, he declared that conservatives lost voters’ trust in 2015 because the Progressive Conservatives “had been in power for too long and had become arrogant.” The public was fed up with their political games. And the other side, the Wildrose Party? “It lacked discipline,” Kenney told his new party faithful.

So what’s the first thing he does with his new party? The first bloody thing, to inaugurate this fresh democratic movement? His team coordinates a sham candidate to run alongside him in the leadership, whose main purpose is to say all the snarky things about Brian Jean, Kenney’s chief rival, that Kenney’s leadership braintrust thought not genteel enough to come from their man’s mouth.

His team’s crepe-thin defence was that candidates often communicate and sometimes even coordinate messages in intraparty leadership contests with preferred balloting. As an abundance of documentation leaked to Maclean’s and multiple other sources indicates, Kenney organizers played a cradle-to-grave role in Callaway’s short-lived campaign to kneecap Jean.

And Callaway, the poor chap, wasn’t even the first choice as a stalking horse—former UCP politician Derek Fildebrandt says Kenney initially approached him about performing in that role. It’s now called a “kamikaze” candidate scandal—so named because one Tory called Callaway that in a secretly recorded conversation, oh these sneaky backstabbing conservatives and how they trust and treat each other.

Kenney’s Conservatives have long hoped the Alberta election, which Notley will call within days for a mid-April vote, would be fought over the province’s lackluster economy and unemployment—prevailing anxieties that don’t cry out for a second NDP term. Notley’s side believes its best shot is if the campaign narrative is about which leader you can trust. Conservatives worry this hurts a bunch.

It’s clear this Callaway—kamikaze, Kenneykaze, whatever—mess sows doubt in Kenney’s trustworthiness, and has New Democrats calling him a flat-out liar because of his 1½ years of denying his team was in cahoots with Calloway. Will this be enough to overwhelm Alberta’s yearning for economic boom days as the dominant ballot question? Why, election campaigns exist to help solve such nagging questions.

As the latest leaks and revelations rattled around Alberta politics, conservative and New Democrat alike wondered aloud: why would Kenney have even bothered with a sham candidate plot to try toppling Brian Jean, a politician of lesser resume, political network, organizational savvy and communications polish? Almost nobody would argue that Callaway’s ham-handed Jean critiques were needed to put Kenney over the top—he won the contest with 61 per cent on first ballot, nearly doubling Jean’s total.

This treachery reveals Kenney’s ruthlessly competitive streak, a keenness to pulverize competition at all costs. He had grown used to lopsided victories: he often prevailed in his suburban Calgary riding with 70-per-cent majorities; early in 2017, he seized the PC leadership with 75 per cent. Kenney would crush again, brooking no room for error or murmurs about a narrow, modest victory. The last several polls have forecast another landslide in Alberta’s general election, and some UCP insiders believe Kenney’s side could win 70 or more of the province’s 87 seats.

Should Kenney prevail, sham-candidate scandal be damned, it’s now fair to wonder where this impulse to crush will take him as premier. He has promised such pulverizing-the-foes zeal on what’s indisputably Alberta’s most critical file: oil pipelines. He’s promised a multi-pronged “fight back” strategy: build a governmental war room to counterpunch detractors, provide legal funds for companies to sue environmental organizations, fight to revoke the federal charitable status of the David Suzuki Foundation and its ilk, boycott banks that stop investing in oil sands, and much more such pugilism.

The rub is that the Trans Mountain expansion pipeline and other projects like Keystone XL may survive regulatory hurdles, legal challenges and protests without a government having to carpet-bomb green groups into bloodied surrender. Such aggression could win a pipeline that could have been won anyway, but Kenney would risk losing the now-stronger national public support for such projects at the same time as concern rises for climate action. He could succeed on one front, but become renowned elsewhere in Canada as a pro-oil thug.

It’s the same way with the UCP leadership scheming—he resoundingly won one day, but the nastiness in which he did so only wounded him for present-day battles. No serious analyst would count out Jason Kenney winning regardless, but it will put him in an uncomfortable spot. Politicians don’t normally march into office carrying on their shoulders such a sordid, cynical affair; it’s the type that gets them drummed out of office.