What a nice little airplane you have, Mr. President

Image of the Week: Trump forced Justin Trudeau to look upon a toy-sized model of Air Force One as the two discussed world affairs. No one said the meeting would be normal. 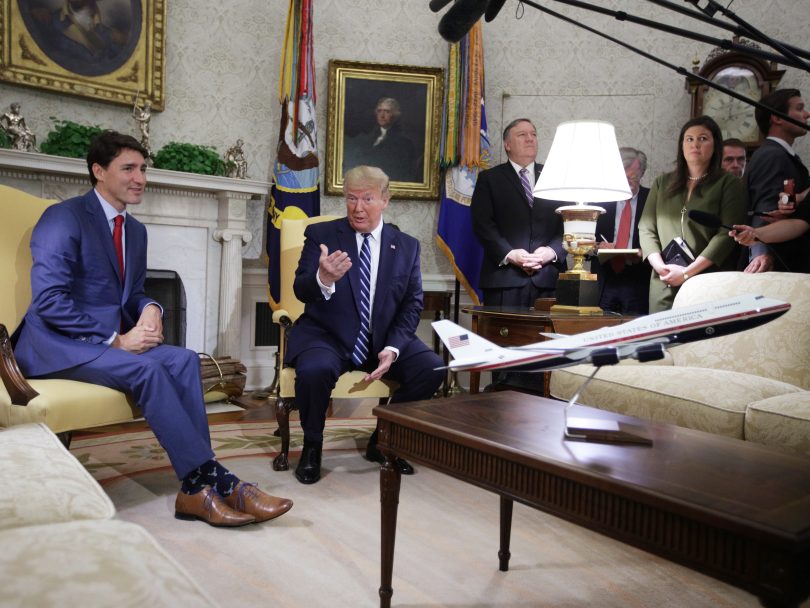 When Prime Minister Justin Trudeau met with U.S. President Donald Trump on Thursday, the two eased into the beige chairs of the Oval Office for a cordial photo op and press conference. But there was an elephant in the room. It wasn’t Iran, which recently shot down an unmanned U.S. drone; it wasn’t China, which Trump promised to stand up against alongside Trudeau in defence of the two Canadians detained there; it wasn’t even the Toronto Raptors, who may or may not visit the White House after their historic NBA championship. (“We’ll think about that,” Trump mused.) No, the proverbial elephant in the room was a redesigned model of Air Force One, a shiny new toy Trump wanted to show off to the world in the form of a centrepiece on his coffee table. America’s presidential jet has maintained the same design since John F. Kennedy sat in office, a two-tone baby blue streak underlining a stately serif font. In Trump’s defence, it does look a little ’60s. But the redesign will cost him more than money: critics have already pointed out that it’s basically an inverted rehash of his own private jet, a blatant rebranding in an attempt to remake the country in his image. Trudeau, politely staring at the model with a tight-lipped grin and crumpled-up body language, had trouble containing his awkwardness. Maybe he remembered the time last year when Trump posited that Trudeau didn’t know Air Force One was equipped with televisions. If he didn’t know then, he definitely does now—along with all the plane’s decals, colour palettes and other design elements, whether he cared to know those things or not.