The Liberal budget offers new benefits for parents and caregivers, and hints at new child-care spaces

Canadian parents will soon be able to choose between the usual one-year parental leave or an extended 18-month leave—at a lower rate of salary top-up—when they welcome a new child. The new parental benefits are among a host of measures in the 2017 budget that the government touts as helping families, and particularly women, by giving them more flexibility in juggling work and their families.

By the end of this year, when parents have a new baby or adopt a child, they will be able to choose between 12 months of Employment Insurance (EI) benefits covering 55 per cent of their salary, or 18 months at 33 per cent of their salary. This change will cost $152 million over five years, beginning this fiscal year, and $27.5 million a year after that, according to the budget tabled Wednesday by Finance Minister Bill Morneau.

In addition, mothers can begin claiming maternity benefits—15 weeks of leave available only to moms—12 weeks before their due date, as opposed to the current policy, which is limited to eight weeks before a baby’s expected arrival. That tweak will cost $43.1 million over five years and $9.2 million a year after that.

MORE: John Geddes on a budget that hopes Canadians look past the numbers

According to the government, both moves are intended to give families more flexibility. However, the eligibility criteria remain unchanged for those benefits administered through the EI program: parents must have at least 600 hours of insurable employment in the previous year, and the ceiling on insurable earnings is currently $51,300 (that figure rises slightly from year to year).

A recent report from the Institute for Research on Public Policy found that women, younger workers and those in precarious or non-traditional jobs are less likely to qualify. As of 2014, 63 per cent of new mothers outside Quebec (which has its own parental benefits system) received benefits; 10 per cent worked, but not enough to receive benefits—though that figure has fallen over the last decade; 11 per cent worked but did not have insured earnings; and 16 per cent had not worked in two or more years. 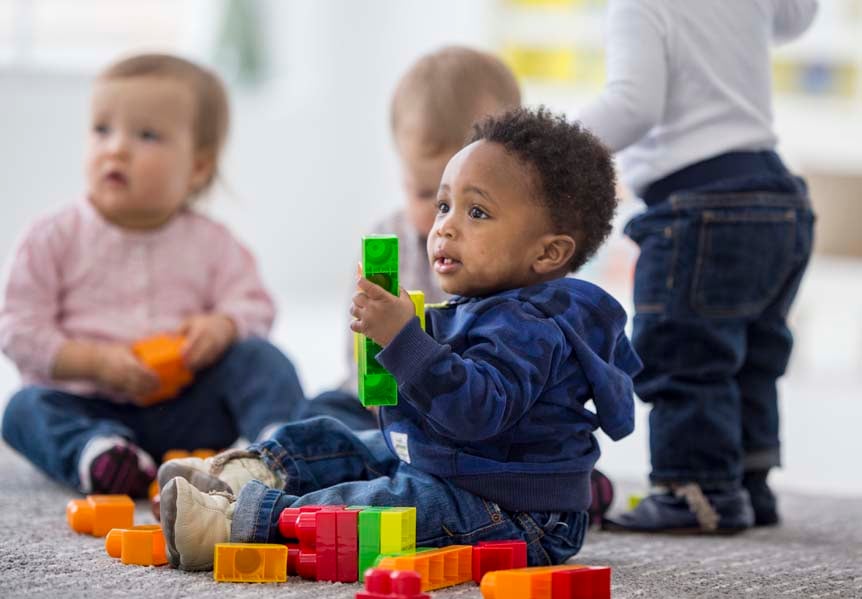 Babies playing with toys indoors at a daycare. (FatCamera)

Another budget item touted to help families—and particularly women—is a new caregiving benefit. Currently, there is a compassionate care benefit available to people caring for a family member near the end of life, but the new benefit would offer 15 weeks of leave—at 55 per cent salary—when caring for a loved one with any serious illness or injury. This measure will cost $691.3 million over five years and $168.1 million a year after that, the government says. An existing benefit that offers parents or guardians of critically ill children up to 35 weeks of coverage will also be tweaked to allow them to share that leave with other family members.

However, the biggest-ticket budget item aimed at Canadian families with kids is so far entirely devoid of details. The budget includes $7 billion over 10 years for more early learning programs and child care spaces. That funding kicks in next fiscal year, and is in addition to $500 million for 2017-18 that was announced in the 2016 budget. This provides the long-range funding advocates have asked for, but it remains to be seen what exactly it will pay for, or how it will change the reality on the ground.

“For too many families, the lack of affordable, high-quality child care means difficult choices—some parents may have to sacrifice retirement savings to pay for child care, while others may leave their careers because child care is unavailable or unaffordable,” the budget document notes.

To that end, the federal government is consulting with the provinces and territories and Indigenous communities—each of whom will ultimately determine how to use their allotted portion of the funding—with an eye to creating a multilateral “framework” of priorities and approaches to child care. There is no timeline yet for that. The budget document floats the idea that the new funding “could” provide up to 40,000 new subsidized child care spaces for families with limited income, or “make it more affordable for parents to return to work,” but offers no specifics.

Many of these family-friendly gestures are explicitly framed as helping to keep more women in the labour force and giving them more options for balancing the various spinning plates in their lives. The final chapter of the 278-page document is entitled Equal opportunity: Budget 2017’s gender statement. The government says that this and all future budgets will be subject to “gender-based analysis,” which means examining how public policy affects men and women differently and shaping government programs accordingly.

Among Organisation for Economic Co-operation and Development countries, Canada does relatively well with women in the workforce, the budget notes—but it still lags behind the top performers. “Women with children are often excluded from full participation in the labour market due to challenges in balancing work and family life, or they work part-time, which often means lower wages and fewer benefits, including lack of a pension, paid vacation and sick leave, as well as less job stability,” the document states. “Budget 2016 and Budget 2017 include many measures aimed at reducing the gender wage gap, encouraging greater workforce participation among women, and helping to combat poverty and violence.”