What Canada's pro-oil boosters fail to grasp about climate change

Stephen Maher: Many climate plans rely on continuing to produce emissions and leaving it to the next generation to get carbon out of the air. It's a choice we can't afford. 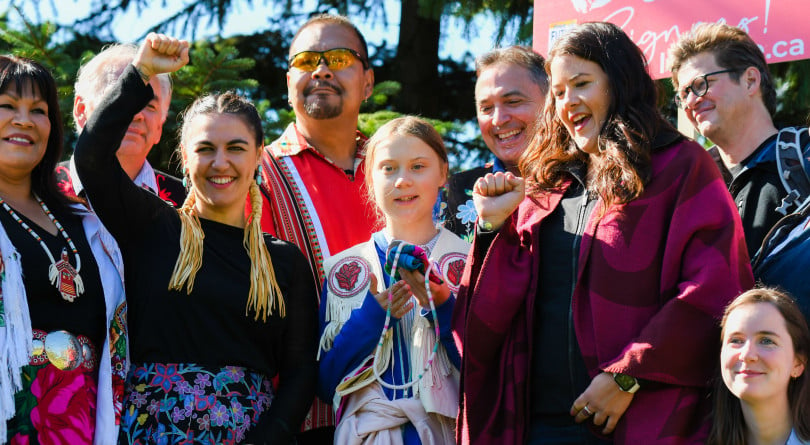 The Liberals announced Tuesday that, if re-elected, they would commit to reducing Canada’s carbon output to zero by 2050, which would put us in the first rank of countries in the fight against climate change, if we find a way to hit our targets.

Environment Minister Catherine McKenna acknowledged that the party doesn’t know how it will do that. “We may not know exactly how to get there, but that’s the same of all countries that have committed to this,” she said.

Not so fast, says economist Jack Mintz, a fellow at the University of Calgary’s School of Public Policy. Mintz told the National Post that the goal is unrealistic.  “Demand for our oil and gas is increasing worldwide with more people in developing countries becoming middle class,” he said. “Our oil and gas is used in single-use plastics, automobiles, bunker fuel, aviation fuel. Every country will have to commit to being carbon neutral for demand for our bitumen to end.”

Mintz, a member of the Order of Canada, is often quoted as an expert on energy questions, but he is also an active participant in the oil industry. Since 2005, he has sat on the board of Imperial Oil, which is 70-per-cent owned by American giant ExxonMobil.  According to Imperial’s annual report, Mintz received $258,675 last year for his work as a director, and holds $1.5 million in Imperial Oil shares.

Imperial Canadian facilities released 1.3 million tonnes of emissions from its refineries and oil sands operations in 2017. It also owns part of Syncrude’s enormous Mildred Lake mine near Fort McMurray, the largest emitter in the oil sands. But in March, Imperial announced that it would delay a planned new $2.6-billion facility in the oil sands.

A lot of foreign money has been exiting Alberta. Since 2016, Koch Industries, Equinor, ConocoPhillips, ExxonMobil, Shell and Devon have all sold out.

There is a quiet struggle taking place in financial markets over the valuation of high-emission fuel sources, like the Alberta oil sands, because if pressure continues to build for lower emissions, Alberta’s enormous reserves will no longer be desirable, which will have huge consequences not just for Alberta but for Canada’s financial markets, and our politics. How will equalization, for example, work, if bitumen can no longer be exported? Nobody in this country is talking about that, but some foreign investors obviously think it is possible.

The problem for the oil industry, and for the oil sands in particular, is that if governments follow through on their commitments to reduce emissions in line with the Paris Accord—which is necessary to prevent ecological disaster—the world will be burning less oil before long.

Industry boosters like to point to projections produced by the International Energy Agency that show demand increasing in the decades ahead, but those rosy forecasts rely on meeting carbon reduction targets by removing massive amounts of carbon from the atmosphere in the future, in some as-yet-to-determined manner, likely by growing crops on wasteland, burning those crops and capturing and storing the carbon.

There is a massive X factor in these projections, using technologies not yet discovered to suck pollution out of the air.

The plan, apparently, is to continue producing emissions and let Greta Thunberg’s generation worry about how to get the carbon out of the air later, which is why she is going around delivering such grim speeches.

It seems much more sensible to switch to low-carbon alternatives as soon as possible. But the companies and regions that rely on high-carbon fuel do not want that, and they are stalling for time.

Take the Conservative Party of Canada, which proposes to kill the Liberals’ carbon tax and instead levy fees on large emitters that will go to a fund to develop green technology, which sounds good, except that without a price on emissions, it is unclear why anyone would use green technologies. The Conservative climate plan, like that of the United Conservatives in Alberta, appears to have been written by the oil industry, which will be able to spend emission fees on technological R&D under the supervision of a government sympathetic to its business problems.

Western Canadian conservatives, and the oil industry, are both spending money and political capital in a seemingly integrated PR campaign to convince voters that any plan to reduce emissions is ridiculous. When they are not undermining public confidence in the science that shows that increased emissions put our future in jeopardy, they are suggesting that there is no point in us doing anything because other countries will likely take advantage of our stupidity.

On Wednesday, Brock Harrison, director of communications to Andrew Scheer, shared a quote from Scheer on Twitter: “We can shut down our economy tomorrow morning and within a matter of weeks China would replace all of our emissions.” (Scheer pointedly avoided attending any of the climate marches taking place across the country on Friday).

Harrison told me the projection is based on numbers from the Global Carbon Atlas, which shows that China emits 9,839 megatonnes of carbon annually—26.96 megatonnes a day. Canada emits 573 megatonnes a year.

If we stop tomorrow, which not even David Suzuki is proposing, it would take only 21 days for China to produce as much carbon as we produce in a year.

But Scheer said “replace,” not “produce as much as.” From 2016 to 2017, China’s emissions grew by 134 megatonnes after a decade where it had kept them more or less level. At that rate, it would take China four years to replace our emissions, not three weeks. And China, like most of the world’s countries, has committed to reducing emissions, and is simultaneously doing things that will make that harder, like building new coal plants, and things that will make it easier, like rapidly increasing the number of electric vehicles on the road.

And if we don’t cut emissions in both countries, soon and steeply, the world is in big trouble, worse trouble than most people realize. The ice caps will melt. The coral reefs will all die. Coastal cities will be washed away. Some of the world’s biggest cities will become uninhabitable. There will be pressure to cool the earth by forcing particulate matter into the stratosphere, a terrifying prospect, turning the Earth into a science experiment.

So long as Trump is in the White House, sabotaging international efforts to cut emissions, it is going to be difficult to make the changes necessary. And even after he is gone, the fossil fuel industry and the communities that rely on it will continue to fight, portraying environmentalists as foreign-funded extremists who want to kill the industry out of spite, not because they are petrified of the future that awaits us if we continue to overheat the planet.

But there are signs that this intense pro-oil message has limited appeal.

The Conservatives’ anti-carbon-tax message is selling like Ford F-150s in the Prairies, but it is not doing the party much good in other parts of the country, where most voters want climate action, although they always tell pollsters they want someone else to pay for it.

The horrible truth, the message that Thunberg will deliver in Montreal today, is that we have no choice but to pay. We can pay now or leave it for her generation to pay later, when the price will be much steeper, tragically steeper.

The problem is that we do not want to hear her message, not just because of the PR campaign telling us that we’re foolish to be alarmed—which is a lie—but because it’s easier to do nothing and let Thunberg’s generation deal with it.

It’s no wonder she is angry.