What Donald Trump and Gwyneth Paltrow have in common 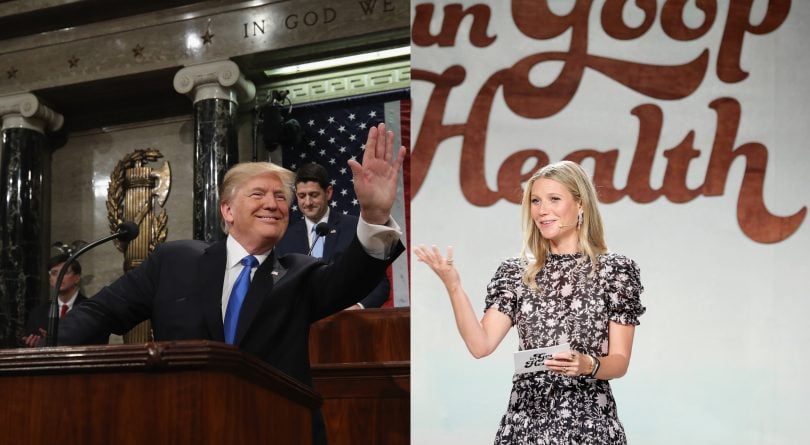 Bob Woodward’s upcoming book, Fear: Trump in the White House, is destined to be a blockbuster. The Washington Post journalist won a 1973 Pulitzer Prize with Carl Bernstein for exposing the Watergate scandal leading to Richard Nixon’s resignation. Whether he’s unearthed the kind of dirt on 45 that could see a similar ouster remains unknown. What’s clear, though, is that the title is a masterstroke, destined to appeal across the political spectrum. Fear sells. It also deﬁnes the zeitgeist, with Donald Trump the fearmeister nonpareil. With a con man’s instinct for sizing up a mark, Trump landed in the White House in part by cannily tapping into his supporters’ fears—of the movement away from white, male hegemony; of falling behind economically; of immigrants and refugees. Trump’s opponents harbour their own fears: of the chaos, damage and catastrophe predicted in Shock Doctrine: The Rise of Disaster Capitalism, Naomi Klein’s 2008 book outlining how cataclysmic events can be exploited to destabilize populations with the goal of radical privatization. We saw it in the Iraq War. Now it’s evident in ravaged Puerto Rico and horriﬁc U.S. detention camps for babies and toddlers.

Fear’s publication date, Sept. 11, is also etched in the “fear” calendar: it’s the 17th anniversary of 9/11, which led to George W. Bush launching the “War on Terror” and the bottomless fear of an indeterminate enemy.

READ: Charlottesville and the politics of fear

Fear is a vital and necessary primal reflex, particularly when sussing out the unknown. When stoked, it’s expressed in anger and hate, much as hurt and pain are. That makes it ripe for harvesting by inexperienced politicians promising to blow up the building, like Trump and now new Ontario Premier Doug Ford.

Fear and anxiety have always fuelled consumerism, of course—from fear of “ring around the collar” to fear of aging to Instagram-stoked FOMO (fear of missing out). Few sectors currently exploit fear more stealthily than the positive-vibe “wellness industry,” the gold standard being Gwyneth Paltrow’s Goop, worth some $250 million according to a recent New York Times story. Goop sells upscale transcendence marinated in fear, with articles such as “The eight known carcinogens that lurk in most of our homes,” “Could there possibly be a link between underwire bras and breast cancer?” and “Why fear-based makeup doesn’t work” (linked to a $185 serum).

Instruction on how to prevail over fear is another Goop staple. One article is titled “How fear holds us back and how to conquer it.” What conquers fear is knowledge, education and facts. That’s why dictators despise data and a free press. Paltrow too has shunned evidence-based scrutiny—she recently walked away from a deal with Condé Nast because it insisted on fact-checking her articles. (In so doing, she saved some poor fact-checker from verifying her advice on eliminating a parasite: “In my experience, an eight-day, mono-diet goat-milk cleanse—accompanied by a speciﬁc vermifuge made of anti-parasitic herbs—is the most successful treatment.”) Yet the fact that many of Goop’s spurious claims have been debunked by doctors and scientists (underwire bras don’t cause breast cancer; mugwort doesn’t “rebalance” female hormones) has only aided her bottom line by generating media stories that increased trafﬁc to the site.

MORE: How Gwyneth Paltrow’s ‘Goop’ is duping us

Paltrow gets the zeitgeist. It’s never clickbait, she recently told a Harvard business class, according to the Times. “It’s a cultural ﬁrestorm when it’s about a woman’s vagina.” That too reflects a reluctance to teach children important sex education, entrenching shame about “what’s down there” and giving people like Paltrow agency to tell women, erroneously, that they need to “steam clean” their vaginas.

But even informed outrage can be oxygen to Goop, as it is to Trump and Ford. Notably, neither Barack nor Michelle Obama refer to Trump by name. How to report accurately without promoting hate is a media dilemma. Recently, Vice News refused to mention the name of Toronto mayoral candidate Faith Goldy, who was ﬁred from Rebel Media for appearing on a neo-Nazi podcast, in its article “S–tbird running for mayor of Toronto.” In the Times proﬁle, Paltrow was asked about criticism from The Cut, a popular section of New York magazine. She knew to shut down the air supply: “I don’t know what The Cut is.”

Fear culture’s highest praise is being “fearless,” another evidence-deﬁcient claim that warrants scrutiny. We saw it in the gushiness over Fearless Girl, a statue of a child installed by a mutual-fund company, which deﬁantly stares down the bronze bull near Wall Street. Expecting a little girl to vanquish a beast without backup is the same magical thinking that sells Goop’s US$85 “medicine bag” containing eight rocks billed as “chakra healing crystals that have been energetically cleansed with sage, tuned with sound waves, activated with mantras and blessed with Reiki.” Fearless Girl should be frightened. Blinkered fearlessness isn’t the answer: courage and bravery, responses that understand the threat but act nonetheless, are. Here, Franklin Delano Roosevelt’s famous line in his 1933 inauguration speech, “The only thing we have to fear is fear itself,” is instructive. The speech deﬁned fear as a “nameless, unreasoning, unjustiﬁed terror which paralyzes needed efforts to convert retreat into advance.” We need to remember that now.