What happens when the demand for Alberta oil goes away?

Jen Gerson: Twitter fights about pipeline politics, carbon taxes and culture wars are fashionable. But Alberta needs to think long-term—and not just hope for another boom. 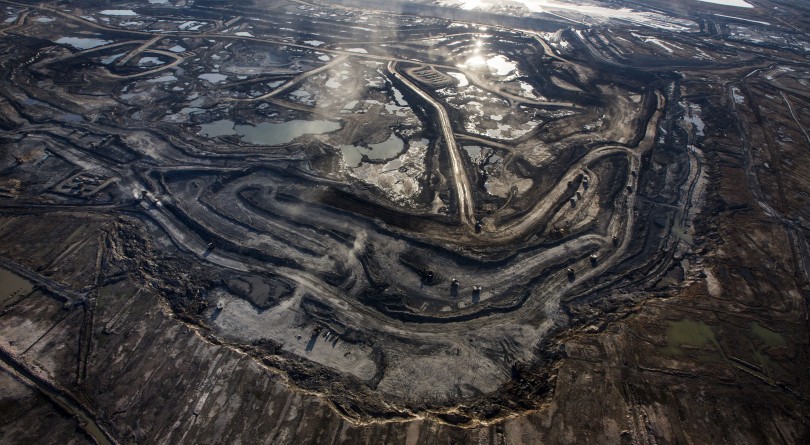 Trucks and machinery along routes within the Suncore Oil Sands site near to Fort McMurray in Northern Alberta. (David Levene/The Guardian/eyevine/Redux)

With the writ set to drop within weeks or days in Alberta, pre-election jiggery has been shaking out as anyone might have predicted.

Behind in the polls, the party of premier Rachel Notley has already set a deeply negative and personal tone, focusing on Jason Kenney’s long record of conservatism on abortion and LGBTQ issues.

The NDP is also raising fears about the prospect of private health care—which the province already uses to deliver some services. It’s as if the grainy ghosts of ’90s attack ads have arisen from the archives of campaigns past.

Meanwhile, Kenney—buoyed by an angry populace besieged by an Ottawa-backed environmental conspiracy that clearly intends to impoverish the province—is promising an end to the carbon tax, and a full education curriculum review. Rest assured: nary a student shall be indoctrinated with Marxist identity politics in this province. This election hasn’t yet started and it’s already a little exhausting.

READ MORE: Rachel Notley fought like hell for Alberta, but the province isn’t about to thank her.

Though it would be impossible to guess by the pre-campaign rhetoric, Alberta actually does have serious problems. Pipeline politics, carbon taxes and culture wars will no doubt inspire voters to clash on social media and turn up to the polls. But in the long term, this should be our real concern: the demand for oil is going to go away.

This is not a utopian (or dystopian) prognostication. The world isn’t going to stop using oil in the next five years—or in the next 10, or 15. We may yet see another oil boom, or two. There will probably be applications for oil and plastics over the next century, and Alberta should be doing everything within its power to supply that demand.

But it’s a pretty safe bet that global demand for oil is going to abate within my lifetime, as climate change policies, decarbonization efforts and new technologies come to the fore.

These shifts are already starting to happen. My child—a toddler today—will probably drive an electric car. He may never learn to drive at all. So what, exactly, is the plan?

The NDP, to its credit, has focused on economic diversification, recently announcing a $1-billion program to build oil upgraders (though it should be noted the province’s history with these kinds of schemes is spotty).

Yet this province has a bad habit of talking about the need for economic diversification until the next resource boom rolls around to save the day. “On diversification specifically, it’s just one of those words we throw around, but we don’t know what it means or what the actual goals are,” says Trevor Tombe, a professor of economics at the University of Calgary. The problem is that talk of diversification is just that—talk—if the provincial government’s own fiscal situation remains a mess.

Alberta has suffered substantial deficits since the oil price dropped in 2015 and oil revenue tanked with it. Just as a decade of Progressive Conservative governments had done before it, the NDP adopted a strategy of waiting for the oil royalties to come back.

Since the days of Ralph Klein, this province’s approach to economic diversification has really amounted to subsidizing high public spending and low taxes with oil and gas royalties. This hasn’t been a bad strategy. Since the 1970s, the province’s overall dependence on the oil and gas sector has declined.

But it only works as long as resource cash rolls in by the billions. Since the oil royalties tanked, the provincial government has wrestled a structural budget deficit that it can’t fix without angering conservatives and progressives alike.

If Kenney wants to cut corporate income tax and return to Alberta’s flat tax—as his United Conservative Party’s policy directive sets out to do—he needs to explain how he’ll make up the enormous royalty gap without further entrenching our dependence on royalties. Efficiencies, cuts and reductions in public-sector wages will have to be part of the solution, but the notion that cuts alone will stitch over the problem is an abject fantasy.

Tombe doesn’t believe Alberta’s financial situation to be irreversibly terrible compared to those of other provinces—at least in the short term. He believes the province can return to balance by around 2023.

It’s what happens next that scares him.

“The big challenge comes after that, with health care costs growing and falling royalty revenue. The longer-run challenge we have is enormous,” he says. “And no one is proposing sensible, long-term approaches to address it.”

Facing that grim vision, I’ve grown more bored with Twitter wars about which side wears the black hats and which side the white. I want to know who has the plan.