What happens if Kathleen Wynne and the Liberals only win one seat?

If polling is any indication, Kathleen Wynne and the Liberals may only retain a handful of seats — maybe even just one 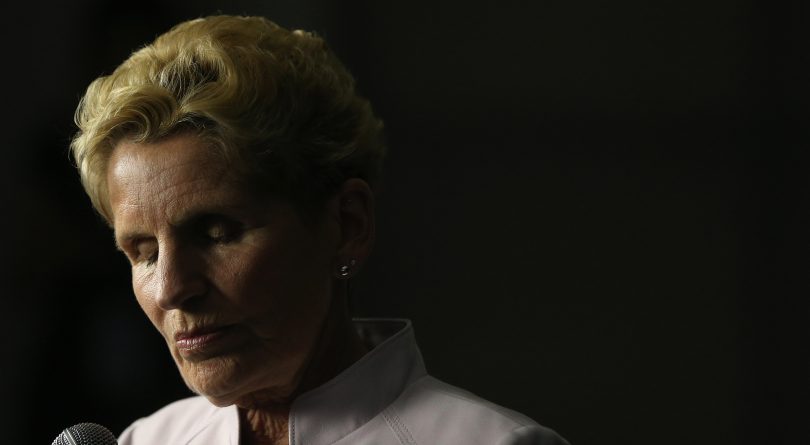 Premier Kathleen Wynne takes questions in a post-debate scrum after the final leadership debate before the election at the CBC Building on May 27, 2018. (Steve Russell/Toronto Star via Getty Images)

Election day will not be kind to Ontario Liberal leader Kathleen Wynne, if polling is to be believed. Her party has been in power for 15 years and by the time the chips have all fallen on Thursday, it’s possible that the Ontario Liberals will only retain a handful of seats — maybe even, just one.

Wynne has already admitted that she likely won’t be winning the election and analysts have weighed in either calling her announcement/concession speech “desperate” or “genuine.” She’ll be campaigning to ensure that at least some Liberal MPP candidates end up in the legislature, but her new goal is to make sure Ontario will have a minority government — whether it’s the PCs or the NDP who come out on top. And while some commentators are saying that being trounced is a good thing for the party long-term, what about in the short-term? What happens to the beleaguered Liberals after June 7?

Well, the grim predictions from Wilfrid Laurier University suggest Liberals will only gain seven seats while CBC’s poll tracker, as of June 6, projects that the PCs will win 74 seats, the NDP will gather up 50 seats and only one seat will be won the Liberals. But even if the Liberals manage to win a few more, there is a strong possibility that they’ll win fewer than eight ridings. So according to legislature rules, after election day, the Liberals will be stripped of their “recognized party” status.

In Ontario, any party with fewer than eight seats loses its status as a “recognized party,” according to the standing orders of the legislature. What that would mean is:

The federal Liberals in 2011 were knocked down from being official opposition to third-party status after only winning 34 seats — party leader Michael Ignatieff lost his own riding. Before that, in 2003, the Ontario NDP were temporarily stripped of their party status for eight months until Andrea Horwath won a by-election in, what is now, Hamilton Centre and the party regained its recognized party status. The Liberals weren’t the only party on the federal level to have taken a shellacking: In 1993, the Progressive Conservatives only won two seats and it took until 2004 before the newly formed Conservative Party clawed its way back up.

They likely take a page from the Greens party playbook

If you need a prediction for what “politics, as usual,” will look like for Ontario Liberals, think of how the Green Party in Ontario and the Greens on Parliament hill operate now. Despite not having a seat in the legislature, Ontario Green party leader Mike Schreiner still hammers down on the issues largely ignored by the major parties, holds press conferences to focus on an issue, and uses social media to remind people they’re still relevant. Meanwhile, the federal Green party leader Elizabeth May steals the headlines by making impassioned speeches and showing up to rallies for heated political issues — even if that means getting arrested and fined $1,500 for protesting the Trans Mountain pipeline.

Regardless of how many seats they pick up, the Liberals will likely still retain less than a quarter percentage of voter support in the public. This is based on Wynne’s overall popularity which is hovering around 20 per cent going into the election day.