What Jagmeet Singh can learn from Rachel Notley's NDP

Jen Gerson: The hard work of governing means having your feet planted firmly on the ground—even if there are pipelines beneath you 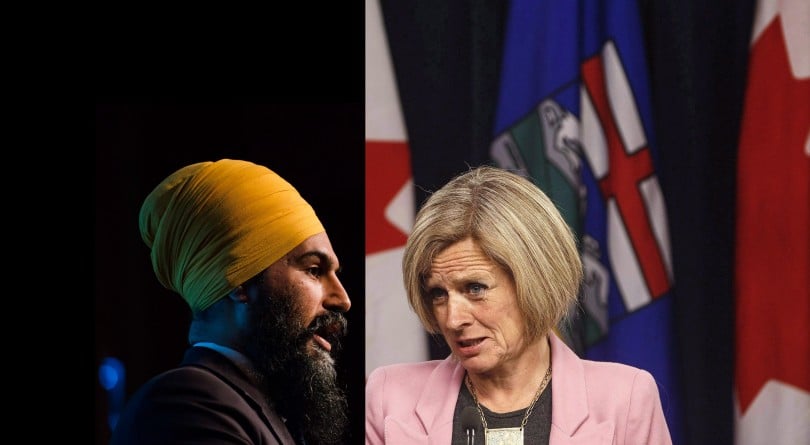 It was an interesting but little-noticed announcement from Alberta’s NDP government recently: “Making hunting more affordable for seniors.”

The government plans to reduce the cost of white-tailed deer and bird game permits to $8.25 for senior citizens. Currently, they sit at $39.95 and $44.02, respectively.

“Hunting plays an important role in Alberta’s wildlife management and conservation efforts, with special hunting opportunities promoted every year. With the new pricing structure, Alberta will have one of the lowest-cost game-bird and white-tailed deer hunting licences for seniors of any province,” the announcement read. It was accompanied by photos of Shannon Phillips, the minister of environment and arks. On her Twitter feed she was featured smiling below rows of taxidermied deer heads.

All I could think: “Not your federal NDP, this.”

Hunting culture, and the guns that are central to it, are an emotive issue in much of Canada, as in the rest of the continent. Guns are more than hollow tubes of steel. They are also a totem of a particular ideological identity. If you imagine guns are solely tools of violence that don’t belong in the hands of ordinary citizens, I can usually generate a pretty clear picture about the sort of person you are, where you live, the values you represent, and who you vote for.

If you like to shoot deer and targets, the same can be said.

And I was especially glad to help hand the first one to longtime hunter and @AHEIAofficial mentor Tom Bateman, though it may be a bit big for his wallet! #huntingAB #yql pic.twitter.com/2uZOGaykRU

So it seems a little odd for a provincial NDP to come out so unabashedly on the trigger end. And it’s hard not to see the pro-hunting brochure as part of a broader political strategy to distance itself from its most obvious liability—the federal wing of the party.

Singh has had a tough time distinguishing himself on the federal field so far, but last week, as he went on Power & Politics to discuss the ongoing spat between Canada and Saudi Arabia, he suggested, perhaps, Canada should consider importing its oil from other countries.

All of oil-rich Alberta threw up its hands in exasperation. Where, oh where, could Canada possibly get more oil from? And what recently cancelled infrastructure project could have facilitated that increase in independence?

RELATED: Jagmeet Singh has a lot of work to do

Surely, not the Energy East that has been so vociferously opposed by Singh himself? My!

“It struck me that that was a thing that maybe he should have thought through before he said it,” Notley shot back in an interview with the Edmonton Journal.

This rift in the party is not new.

This schism has been obvious since the federal party held its convention in Edmonton in 2016—the same confab that ousted Thomas Mulcair as party leader.

A triumphant Rachel Notley held court for her lefty counterparts in what was once the untouchable dark heart of Conservative politics. She earned enormous applause by representing the old-school, working-class concerns of the party—which then casually undermined her to swear its allegiance to a much more radical brand of environmentalist politics that was an explicit rejection of Alberta’s most crucial primary industry: oil.

The convention endorsed a neutered approval of the Leap Manifesto, which called for a wholesale restructuring of the economy and the energy regime that underpins it. It was written by a coalition of authors, but largely championed at the convention by activists Naomi Klein and Avi Lewis.

“We could live in a country powered entirely by renewable energy, woven together by accessible public transit, in which the jobs and opportunities of this transition are designed to systematically eliminate racial and gender inequality,” it read. The sort of thing that has enormous resonance with upper middle-class urbanites who commute to their knowledge-economy jobs by bike.

RELATED: Avi Lewis on the ‘ideological battle’ over the Leap Manifesto

Though I suppose we all pine for a world fueled solely by wind and solar, the details for how we get there seem left behind by pretty words.

In the meantime, the hard work of keeping the lights on, the schools open and the hospitals running always seem relegated to those with dirty fingernails.

It seems metaphorically fitting, then, to note that no one really talks about the Leap Manifesto anymore. In 2016, the party agreed to study the manifesto for two years; by the 2018 convention, that plan had “fizzled.” Lewis didn’t even show up.

The public relations victory secured for Klein and her cadre clocked, the whole thing was promptly forgotten while Notley had to get back to the yeoman’s work of government; managing a sliding budget, a trade dispute with B.C. and billions in lost revenue thanks to a lack of pipeline capacity.

There was gossip even in 2016 about the Alberta NDP formally splitting from the federal party. Of rebranding itself as a much more pragmatic leftist alternative to whatever radical windmilling the Ottawa orangies were going on about.

Unfortunately, it didn’t happen, then. But Notley’s most recent shot is both telling and cutting.

“I am a New Democrat that comes from the part of the party that understands that you don’t bring about equality and fairness without focusing on jobs for regular working people,” she told the Journal. “To forget that and to throw them under the bus as collateral damage in pursuit of some other high-level policy objective is a recipe for failure and it’s also very elitist.”

RELATED: Rachel Notley takes on pipeline critics—even if they’re from her party

Despite the comments of one of his most successful premiers, Singh continues to double down on the anti-pipeline gambit by announcing he will seek to represent the seat of Burnaby South in an upcoming by-election.

The NDP leader—who currently does not sit in Parliament—could have waited for a seat in Ontario, the province in which he maintains actual roots. Instead, he chose Burnaby, the political epicentre of protests against the TransMountain expansion. A suburb where the benchmark detached house price now hovers at just under $1.7 million.

Fun fact: I grew up Burnaby North, and in the neighbouring Tri-Cities, Maple Ridge and Pitt Meadows. My mother raised her daughter by working at the Shellburn Distribution Terminal, one of several oil-handling facilities currently operating on Burrard Inlet. I grew up picking blackberries in the greenpatch outside my daycare, located just a few blocks away from the Burnaby Terminal that KinderMorgan hoped to expand before the federal government announced plans to buy out TransMountain. And I, like many other area residents, frittered much of my childhood building forts and hiking trails marked by pipelines buried below the greenbelt.

The oil and gas industry is nothing new for Burnaby. It’s been there for generations, though the past by no means binds us to the future.

And I haven’t lived there in a long time—and couldn’t afford to return even if there were a job to take me. So I am in a poor position to know, now, just how heated the pipeline debate has become there. No doubt, Singh will score many points on the national front by championing the opposition to TransMountain.

But among his presumed constituents? It wouldn’t surprise me if their real concerns were much more grounded in housing prices and economic realities than in the broader symbolic gestures, however important they may be for defining ourselves. Hosting a party leader is a point of pride for any riding, but it helps, I suspect, to have your feet planted in the dirt of the place you live for a while. In this respect, Singh could take a tip from Notley.