Terry Glavin: Where the Left isn't wholly irrelevant, it is increasingly indistinguishable from the populist right 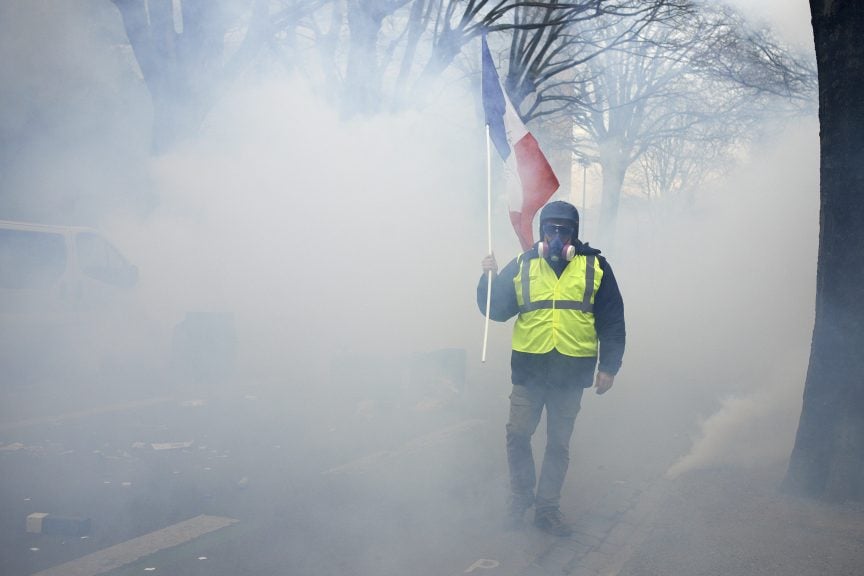 A ‘gilet jaune’ with a French flag walks amid clouds of tear gas on Dec. 29, 2018. (Alain Pitton/Getty Images)

Parisians know how to riot. You have to give them that. Every few years, they put on a great show of bedlam, but during the ﬁnal weeks of 2018, the uprising of the gilets jaunes—the yellow vests—was something else altogether.

They clashed in their thousands with heavily armed riot police, smashed windows, trashed banks and roared out La Marseillaise as clouds of tear gas swirled around the Arc de Triomphe. They burned cars on the side streets and left the Champs-Élysées strewn with rubble. The scenes summoned memories of May 1968, when the city’s radical left pushed the country to the brink of civil war, but this time, something was very different.

The rioters weren’t even Parisians. Weekend after weekend, they poured in from the countryside and from the distant towns and cities, wearing the yellow safety vests that French motorists are required by law to carry in their vehicles. Starting with spontaneous protests in opposition to fuel tax hikes, the leaderless, unafﬁliated yellow vests’ cause rapidly mutated into an outlet for expressions of rural and working-class rage against the politics of the Parisian elites and the effete French president, Emmanuel Macron.

There’s another important difference between 1968 and 2018.

U.S. President Donald Trump has claimed the protesters as his own, attributing their fury to the Paris Accord, the international agreement on climate change that Trump renounced in the summer of 2017. George Galloway, the socialist “anti-war” celebrity and disgraced former British Labour MP, also cheers them on. So does the similarly obnoxious far-right, anti-immigrant British pundit Katie Hopkins.

This brings us to the thing about the revolt of the gilets jaunes that speaks such volumes about the state of the contemporary left. In its response to the shuddering tectonics causing such havoc with the decrepit “international rules-based order” that Macron’s policies exemplify, and which Canada’s Justin Trudeau and Germany’s Angela Merkel never tire of summoning us all to defend, the left doesn’t have anything much to say.

RELATED: The Left is constantly trying to out-woke itself. That’s a problem.

As for its capacity to mount a relevant and coherent challenge to that world order, it isn’t clear whether the Euro-American left even exists anymore. Where it isn’t wholly irrelevant, or at best marginal—as Canada’s New Democrats have become under the leadership of Jagmeet Singh—the left is increasingly indistinguishable from the populist right.

This has been a long time coming, and it sometimes plays out in subtle ways. Back in 2015, when former NDP leader Thomas Mulcair was asked why he opposed Canadian participation in the military alliance that the U.S. had assembled to confront the Islamic State in northern Syria and Iraq, he said: “This is not our ﬁght.” This was just a word away from the rationale Britain’s far-right Brexiteer Nigel Farage had offered two years earlier to justify his own opposition to any British confrontation with Syrian mass murderer Bashar al-Assad: “This is not our war.”

Sometimes, the parallels are rather more stark. The widespread Kremlin disinformation lie that Syria’s “White Helmets” ﬁrst-responder organization is an American spy operation, or alternatively a front for the Islamic State’s jihadists, or both, is just as commonly disseminated by leftist “anti-war” activists as by the isolationists of the far right.

Before the events of Sept. 11, 2001, propelled “anti-war” politics to the forefront of left-wing mobilization, activists had spent a decade pouring their energies into an “anti-globalization” movement that challenged what they preferred to call the ideology of neoliberalism. The movement busied itself with roving protests in cities around world, at venues hosting conferences of the World Bank, the International Monetary Fund and other institutions of international capitalism.

RELATED: The political terms ‘right’ and ‘left’ are simplistic, damaging, and need to be retired

As things have turned out, the primary beneﬁciary of those mobilizations has ended up being Trump, a right-wing populist who is only too happy to unravel the same institutions the anti-globalization left spent all that time protesting. Trump’s anti-globalization sets itself against the same global system of collaborative rules, protocols, security arrangements and ﬁnancial regulation that has been sticking in the craw of the left.

A harbinger of what was to come was evident in the Occupy movement, the broadly diverse but more or less anarcho-socialist phenomenon that began with Occupy Wall Street, a kind of 1960s throwback guerilla-theatre event at New York’s Zuccotti Park in September 2011. Occupy-type encampments soon popped up all over the world, but its eccentric American counterculture sensibilities doomed the effort. It petered out in a series of undigniﬁed evictions from city parks and public squares.

On the American right, meanwhile, the Tea Party was exploiting the same public disaffection with global capitalism, and the same hostility to the big banks, and it entertained similarly fanciful analyses that bordered on conspiracy theory. Like some of the smarter Occupy organizers, Tea Party activists committed to working within the American party system. The Occupy effort in the Democratic Party ended with Bernie Sanders’s gallant failure to dethrone Hillary Clinton. But the Tea Party’s anti-establishment paranoia helped clear the Republican Party’s decks for the crude politics that ended up depositing Trump in the White House.

As for the confrontation between the “globalist” Macron and the ragtag gilets jaunes, Macron agreed to suspend the most offensive aspects of his tax reforms. He’s pledged to take some tax breaks back from the rich and bring in a government-ﬁnanced top-up for minimum-wage earners. The fuel tax that started it all is under review, too.

Whether this is enough to satisfy the gilets jaunes remains to be seen. But if they come around to counting themselves the winners, will it be a victory for the left, or for the right?