What to expect when you're expecting a better president

Difficult presidents can be exhausting, even for the most loving electorate. Scott Feschuk offers some tips to get through the trying times. 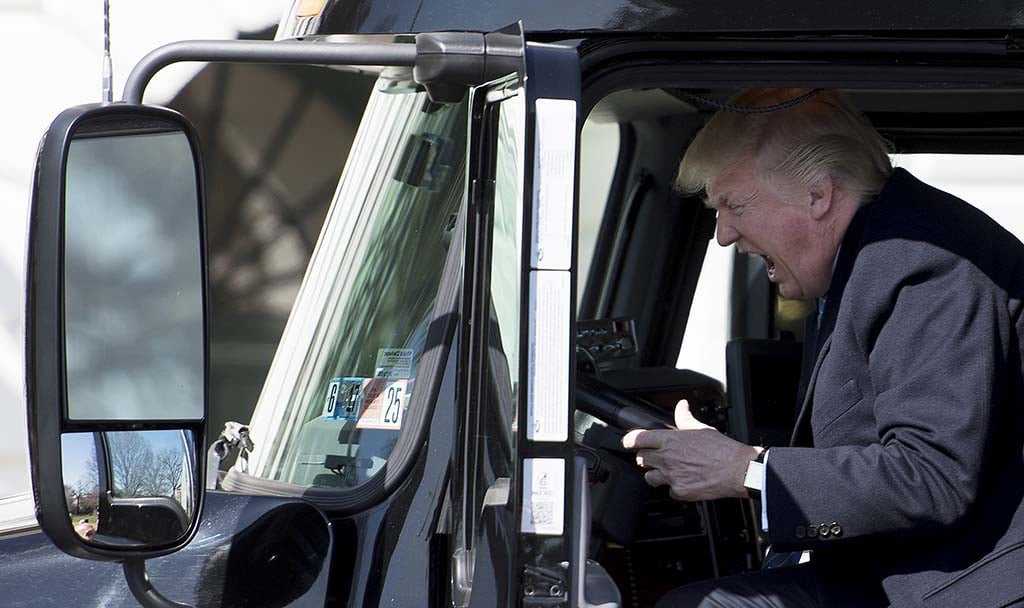 Congratulations on having a president! It’s an exciting time. But the presidential years can also be challenging. Tantrums, screaming, teasing—your president can be quite a handful.

Let’s try to understand why your president behaves the way he does—and how we can encourage him to do better.

RELATED: Feschuk: Donald Trump talking to farmers, translated for the rest of us

Whining. Your President doesn’t understand how to express what he wants. He gets frustrated easily. The more results he gets from whining, the more likely he is to perceive it as an effective way to communicate.

• Help your president identify his emotions. For instance, you might say, “I can see that you’re upset. Is it because you’re tired or because your administration is a smouldering dung heap of chaos, failure and ineptitude?”
• Try a diversion. With your President, just about anything—a weekend without golf, a well-done steak without ketchup, a woman who perceives herself as more than a sexual object—can trigger whining. Your best bet may be to redirect before the whining begins. “Look, Mr. President: Fox News says Hillary Clinton is actually three small Mexican men in a pant suit!” That’ll hold him for awhile.
• Don’t give in. Even if it gets you immediate relief from that annoying whine, you’ll pay in the long run by hearing more of it.

Tantrums. One minute you and your president are in a NATO meeting enjoying genial interplay among alliance members. The next minute he’s shrieking at the top of his lungs because “everyone likes the mean German lady better.”

A presidential tantrum is not a pretty sight. But remember: He’s most likely having a meltdown in response to frustration. He doesn’t know how to use his words. He’s unable to listen to reason.

It’s especially tempting to cave as a way of ending an embarrassing public episode. But no matter how long the tantrum continues, don’t agree to unreasonable demands or try to negotiate with your screaming president.

If you find yourself getting overly frustrated, try leaving Twitter for a few minutes—and returning after your president has stopped raging.

Acting out. This is a sign of a cognitive advance that happens early in a president’s eighth decade. He begins testing boundaries to figure out what his voting base will tolerate.

For instance, your president may look you in the eye while he deliberately does something he knows to be wrong—such as kick a ball in the house or use a social media platform to accuse a female journalist of bleeding badly from a facelift.

Then he’ll sit back to see if there are any repercussions, beyond meaningless expressions of dismay. If there aren’t, what do you think he’s learned?

Lying. At his age, your president isn’t really able to distinguish between reality and fantasy.

This may be a byproduct of Angel Syndrome. A president who recognizes that his supporters think he can do no wrong starts to believe it himself: “People love me because I’m so good. A good boy wouldn’t spill his milk or transform the superpower he leads into a global laughingstock. I don’t see any spilled milk or vastly diminished global credibility!”

How best to deal with a lying president? Don’t accuse. Couch your comments so they invite confession, not denial: “I wonder how those silly Russians obtained so much influence over our elections? I wish someone smart would help me figure that out!”

Interrupting. Your president thinks that the world and everything in it exists for his benefit. He constantly feels the impulse to say things right now. As a result, the very concept of “interrupting” makes no sense to your president. He can’t grasp that there are other people.

RELATED: Trump name to be removed from Toronto tower

Your best strategy may be to distract your president. Let him watch the cable news people talk about him. Or offer him a toy phone so he can “talk” with a world leader. He’ll be in his own world for 20 minutes before he reports back. “Oh, the Prime Minister of Britain thinks you’re very smart and the best and no one is more handsome? That’s great, Mr. President. Now go call China!”

Participating in respectful conversation is a critical step toward becoming a human being. Just remember: With your president, it’s unlikely to happen overnight.

The advice in this column is adapted from the online article, “11 toddler behaviour problems and how to handle them.”