Robert Lewis's new history of Ottawa's press gallery offers lessons for the modern era, when the media is so often under attack 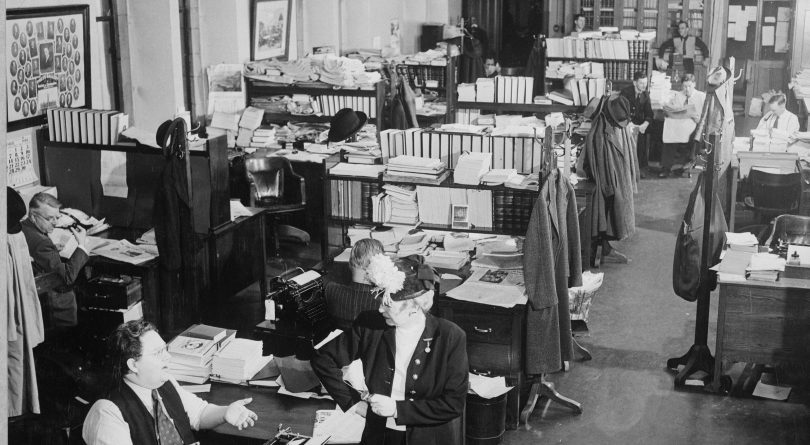 There’s a certain amount of revelling in the romance of old-time journalism in Robert Lewis’s new history of Canada’s parliamentary press gallery, Power, Prime Ministers and the Press. If you’re at all susceptible, prepare to pine for the days when typewriters rattled, booze flowed and deadlines loomed.

But Lewis, who arrived on Parliament Hill as a newspaper reporter in 1965, and later rose to run Maclean’s for seven years as its editor-in-chief, isn’t just waxing nostalgic. Especially in his capsule studies of Canadian history’s most influential political journalists, he offers readers a chance to think more clearly and deeply about the proper role of the media today.

I spoke with my former editor and friend about his book and the changing news climate.

Q: What inspired you to write about the gallery?

A: It started when I was chairing the Canadian Journalism Foundation and we had a panel in Ottawa. The subject was, “Does the press gallery matter?” The question sort of haunted me. So I spent the next three or four years trying to get answers. I did a lot of interviews. While I was writing this, Donald Trump came to power and the whole question of veracity in news became a raging story. The book is a history of some 30 journalists who covered 23 prime ministers over 150 years, and so it is not about the current situation. But I think readers will find that by looking back they’ll get informed about issues we’re facing today about truth. It’s so important right now.

Q: Reading about the 19th-century press gallery—the scene at Ottawa’s old Russell House hotel, the great debates of the Macdonald and Laurier eras—is terrific fun. But the partisanship of the press in that era was so pervasive. How do you regard the unchecked biases of journalists in our country’s formative years?

A: I knew the basic story but when I was somewhat surprised when I got into the details at just how partisan they were. I was struck by the fact that John Willison—who was a really great editor and set the whole business on a course that moved it closer to what we would understand today as good journalism—was very, very friendly to Wilfrid Laurier. Before a crucial election in 1891, Willison basically sat on a story that would have been terribly damaging to Laurier. If you were a Conservative, you followed the Conservative press; if you were a Liberal, you followed the Liberal press. Not unlike what we see happening today in the United States, where you have Fox fans and MSNBC fans, and never the twain shall meet.

Q: You have an interesting chapter on the long struggle for women to be accepted in the gallery. What stood out for you there?

A: It was not until 1922 that the press gallery actually allowed a woman to be a member in the gallery. Fortunately, out of Winnipeg came a woman named Genevieve Lipsett-Skinner. She had been a journalist locally, was part of the suffragette movement there. She was the first married woman in the province to become a lawyer. When she lost in a provincial election, where she ran as a Conservative, she went to her paper and said, “I want to be sent to Ottawa.” And the boss said, “No, I’m sending a man, because the gallery won’t allow you.” She went on her own, developed a freelance string of five leading papers. Finally, the gallery relented when the Vancouver Sun said she is our person and you must let her in. The gallery has frankly stood against modernity in a lot of areas. It was only in the late 1970s and the early 1980s that women really started taking their place in the gallery.

Q: Your book isn’t a memoir, but you give us a feel for what it was like to arrive on the Hill in 1965 as a 22-year-old reporter for the old Montreal Star.

A: For my generation, which came along to Ottawa in the mid-Sixties—that was Norman Webster and Geoff Stevens and Marjorie Nichols and Joyce Fairbairn, people like that—it was the pinnacle for us. We aspired to work in Ottawa. It was a thrill just walking up to the Hill every day, and having a sense that the whole country came together in the confines of those beautiful buildings. I don’t think it’s the same anymore. I think there’s more turnover. And I have a feeling there’s not the same aspiration in the hearts of journalists to be an Ottawa correspondent. That was the conclusion I got from a lot of my reporting.

Q: I’m not sure the lustre is completely gone, Bob. No doubt the place has changed a lot, though.

A: It’s a totally different atmosphere. In my day, you could wander around the corridors, you could drop by a minister’s office. I used to stride into the Langevin Building unannounced. I don’t think people have that kind of access today.

Q: I don’t know if it’s bad for there to be more of a buffer between journalists and politicians, though, even if we sacrificed informality and intimacy.

A: I think it’s a much healthier situation now. In fact, especially now. There’s been so much doubt about the legitimacy of reporters and reporting, so much ill will directed at the media—not just in the United States, but here in Canada, too—that I think it’s important now more than ever that journalism be seen to be independent, truthful and honest.

Q: Still, I found it interesting to read about how tightly packed the press used to be in their space in Parliament’s Centre Block, how close you were to the political action. So much reporting is done now in front of a screen, I wonder what we miss when we lack that physical proximity.

A: In the old days, before my time, the whole establishment, except for the prime minister and External Affairs people, were in one building—all the MPs, all the Senators, all the press. In my day, they had started to spread around to other buildings, but it was still pretty intimate. We were a hundred paces to our press-box like gallery in the House of Commons; we were fifty paces to the Senate gallery. I remember John Turner used to come up to our little hovel and have a drink with us. He was the kind of dashing MP from Montréal, clearly on the rise. Tom Kent, the clerk of the privy council, smoking his pipe, stood there briefing a bunch of us in a semi-circle. If you needed to speak to a minister, that was pretty easily arranged. No people in short pants sent you emails to answer your questions.

This interview was edited for length and clarity.