What your drink of choice says about your politics

A new poll suggests Canadians' booze preferences vary according to the party they vote for. Fortunately, we're more united in our tastes than divided 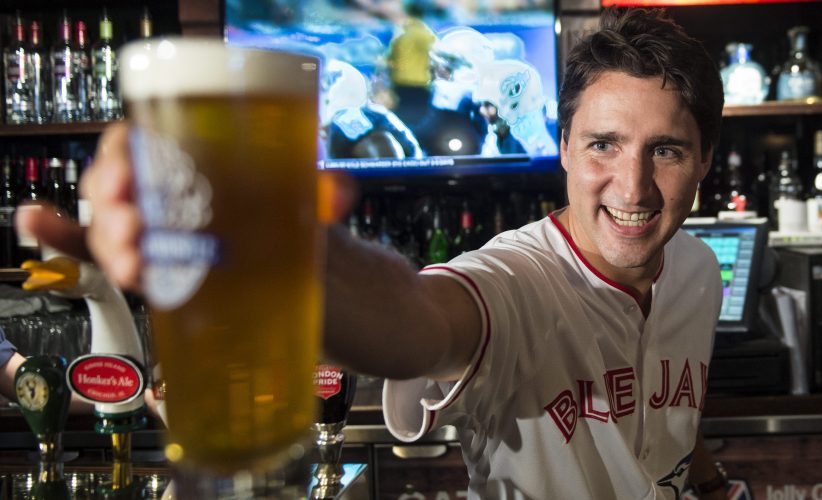 Love of beer unites the Canadian political world: Justin Trudeau offers up a beer to a patron at a pub in Toronto in 2015  THE CANADIAN PRESS/Paul Chiasson

Liberals love wine, NDP voters prefer craft beer and Conservatives are the most likely to be found sipping on a vodka tonic or a rum and coke, according to a new public opinion poll from the Angus Reid Institute.

While our national tastes in alcoholic beverages have more similarities than differences, the contrasts that do exist have a pleasing tendency to confirm stereotypes. If they were all invited to a party, you might find the craft beer-loving, beard-having, bicycle-riding Dippers in one corner, Liberal voters sniffing the cork of a fine cabernet sauvignon in another and the Conservatives enjoying a single mixed drink before leaving early because they have church in the morning. 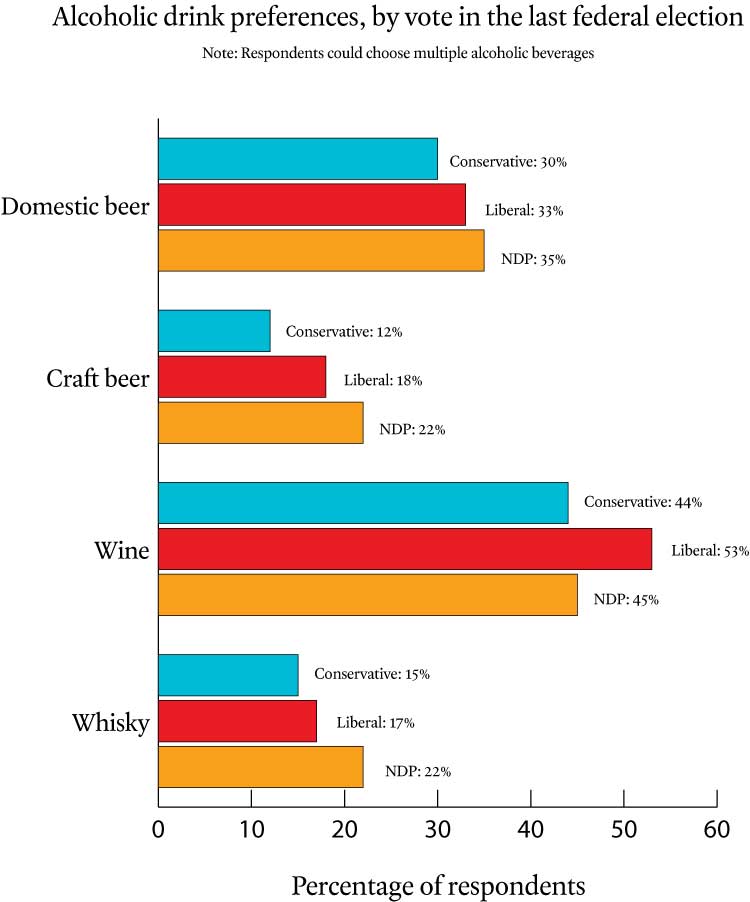 Asked to choose a maximum of three beverages from a detailed list, 53 per cent of people who voted Liberal in the last election included wine among their top picks. Just 44 per cent of Conservatives and 45 per cent of NDP voters did the same.

NDP voters are the biggest lovers of beer of all types—especially craft beer. Slightly more than one in five Dippers chose craft beer among their top beverage choices, compared to 12 per cent of Conservatives and 18 per cent of Liberals.

RELATED: Why buck-a-beer failed before in Ontario—and why it likely will, again

You’d have difficulty guessing a Canadian’s political leanings by his or her drink order, however—the poll notes there are more similarities than differences among our national preferences. In particular, as Canadians navigate a time of deep, bitter political division, it’s comforting to learn there is one thing that unites us: our love of domestic beer.

Canadians of all political leanings say they drink beer more often than other alcoholic beverages, with 43 per cent saying they generally choose suds over wine or liquor. People who voted NDP in the last federal election were somewhat more likely to be beer drinkers, with 48 per cent of Dippers reporting it as their drink of choice. 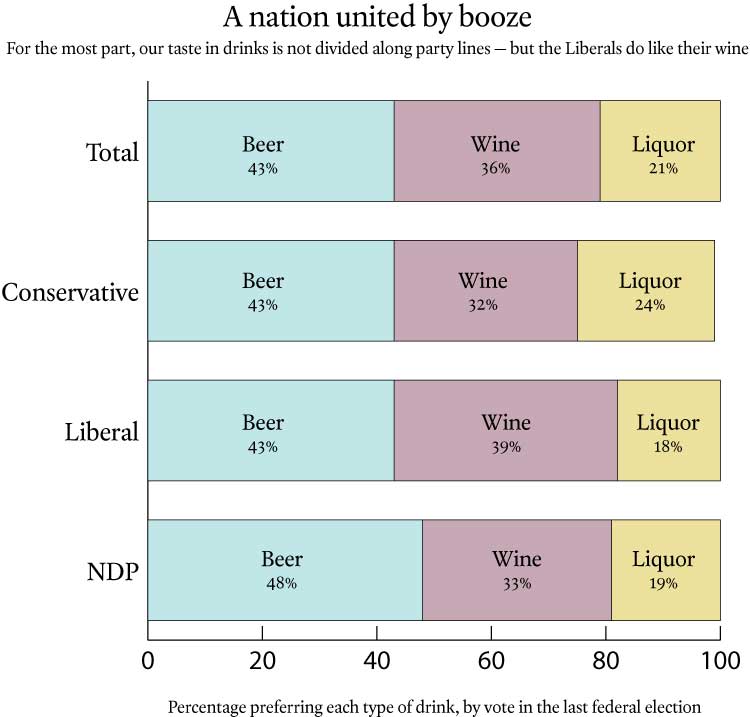 Ontario Premier Doug Ford’s pledge to lower the minimum price of a beer to $1 by Labour Day weekend may sound like an attempt to pander to his political base, but the results of the poll suggest domestic beer drinkers (excluding craft beer) span the political spectrum. In fact, Conservative voters were the least likely to say they prefer to drink domestic beer, with 33 per cent of Liberals and 35 per cent of NDP voters saying they’d reach for a can of Molson or a bottle of Labatt if given the choice compared to 30 per cent of Tories.

Ian Coutts, author of Brew North: How Canadians Made Beer and Beer Made Canada, said he’s not convinced Ford’s buck-a-beer promise will inspire beer drinkers who normally vote for other political parties to throw their support behind the Ontario Conservatives. While NDP voters are the most likely to reach for domestic beer, they’re also the most likely to choose craft beer—and craft breweries have issued statements denouncing the buck-a-beer plan in droves in recent days.

RELATED: Why I traded in my wine for weed

“The people left drinking cheap beer, I don’t know if this would cement their connection to the Conservative party,” Coutts said. “But who knows what goes through Doug Ford’s mind?”

The poll suggests gender is a much better predictor of tastes in alcoholic beverages than political leanings. More than half of men who responded to the poll—and 71 per cent of men aged 18 to 34—said they prefer beer, while nearly six in 10 women said they’d opt for a glass of wine.

Perhaps not coincidentally, men are also significantly more likely to be supporters of Ford’s Ontario Conservatives, according to a phone survey conducted by Ekos Research Associates in April. That survey found about 50 per cent of men and 35 per cent of women said they were leaning towards voting Conservative at the time.

While there are certainly many things that divide us as a nation, Coutts said Canadians can take heart in the knowledge that, for the most part, drinking is not one of them. The differences that do exist are interesting—and easy to poke fun at—but bring a case of Molson Canadian to a party and it will likely be a hit with most.

“We all have a lot more in common than we think. That’s what it tells us,” he said. “It probably references something that’s true about Canadian politics, which is that the parties aren’t all that different. It’s somewhat reassuring.”