'Who is Jagmeet Singh's wife?' and other Google searches during the first debate

Nothing reveals our nosy, prurient and gossipy sides like a hit parade of search-engine queries 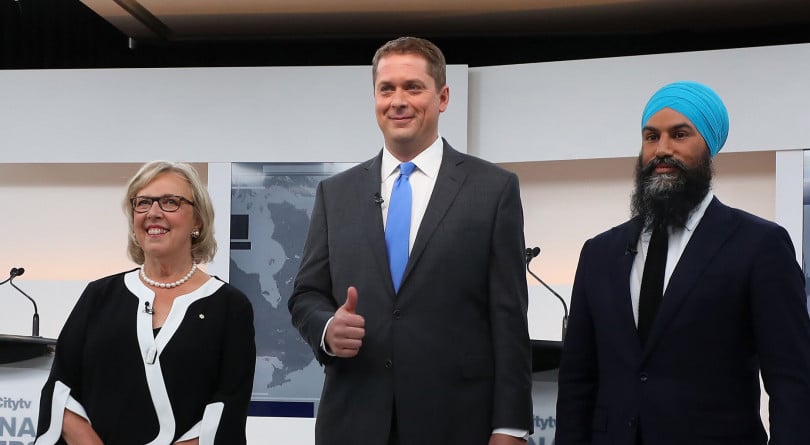 Among the more tasteful Google searches during the Maclean’s/Citytv National Leaders Debate, some oddball need-to-know-now queries proved irresistible to Canadians watching at home. They turned, of course, to their computers and asked many nosy, inappropriate, banal and even rude questions. In the spirit of full disclosure, we have answered them.

Where is Justin Trudeau right now?

Good eye for the PM’s not-so-inconspicuous absence; Trudeau was campaigning in Edmonton at a deliberately late rally that overlapped with the debate in Toronto, where his podium stood awkwardly empty.

How tall is Andrew Scheer?

Wide shots and sweeping camera angles made Scheer look freaky-deaky tall next to average-height Jagmeet Singh (reportedly 5-10, though his pink turban strategically adds three more inches), and Frankenstein-esque next to pocket-sized May, who adorably stood on a footstool behind her podium. For the record, Scheer is 6-4, towering over other world leaders both contemporary and historical: he’s even a smidge taller than Abraham Lincoln.

How tall is Justin Trudeau?

Since he wasn’t there to measure up, viewers needed to know where Trudeau would fall in this height hierarchy. He’s 6-2. Now, let’s all move on.

A little cultural education is in order, it would seem. The answer: a very impressive mop of jet black waves that fall to the middle of his back, that’s what! Singh collectively awed social media users everywhere when the proud Sikh unwrapped his trademark pink turban to the CBC in 2017. Rave reviews called his locks “majestic” and “spectacular” and not altogether dissimilar from those of Game of Thrones’ hunk Jason Momoa.

Who is Jagmeet Singh’s wife?

And in related news, though none of the other candidates’ spouses garnered extra interest, Singh’s marital status and/or availability came up a lot. Sorry, ladies: Singh is newly off the market, having married fashion designer Gurkiran Kaur Sidhu—twice—in February 2018: First in his hometown of Brampton, then again at their very Instagrammable destination wedding in Mexico.

Who is Charlie McCarthy?

If Trump is a ventriloquist, spat May, then Scheer is his Charlie McCarthy. Who? Gen-Xers and their juniors might’ve understood the puppet analogy, but the arcane, old-timey doll reference clearly flew over many of their heads. Now they know: Charlie McCarthy was a carved wooden puppet in a tuxedo and top hat on the arm of comedian Edger Bergen (Candice’s dad). Their radio variety show was widely known and loved from 1936 to 1955—24 years before Scheer was born.

How old is Elizabeth May?

Who won the Leaders Debate?

A dozen variations of this question around 10 p.m. ET brought no clear answers to this unanswerable question. Depends on what website you click on, of course.