Why Andrew Scheer's party is so glum

For Conservatives who longed for a harder-edged leader, upping the caucus seat count and putting Trudeau 'on notice' may not be enough 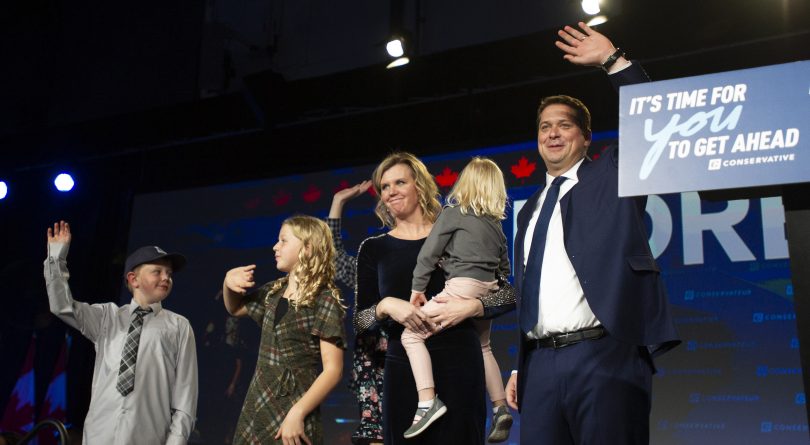 Scheer, with his family, conceded but urged Conservatives to find motivation in defeat: ‘Remember this feeling. Coming close but falling just short.’ (Photograph by Mark Taylor)

Doors opened at Conservative HQ in Regina a half-hour before polls closed in central Canada, with the party far behind in early returns. Supporters shuffled into the hall quietly, like moviegoers entering the theatre after the previews had begun. They hoped the big screens gave them something, anything, to cheer for.

Not tonight. Not this year. As CTV became the first English network to declare Liberal victory, the Regina crowd watched another station to holler for their team leading in Maxime Bernier’s seat. A few minutes later, CBC called it, and as hologram Justin Trudeau strode onto the screen, the TVs switched over? to Global, the last network to declare for Justin Trudeau.

In the hours before polls closed nationwide, Conservative aides made one confident prediction: that only one national party would gain seats tonight, and it would be them. Which is a flex, of sorts, but it’s like predicting a podium finish in a first-past-the-post election.

Reality gave the Conservative results-watching crew few reasons to raise aloft the “Scheer 2019” signs on their seats, or to don the free blue-and-white “C” hats on their chairs. Sure, they cheered and sign-wagged when Scheer won his Regina seat, or chanted “na na na na, hey hey, goodbye” when local Liberal veteran Ralph Goodale conceded. And Scheer’s two incoming Regina MPs addressed the crowd as feel-good warm-up acts to the Opposition leader. Some scenes were thrilling. For this audience, the movie sucked.

Around 11 p.m. local time, long after Scheer was declared silver medalist, he took to the stage with his wife Jill and five children. They then left him alone with his more constant companions of the last six weeks: his “Time for you to get ahead” lectern and his teleprompter panels.

Scheer stressed to the crowd the much upsized Conservative caucus headed to Ottawa, and its growth in support in most regions of Canada. Recalling that Stephen Harper needed to knock down the Liberals to minority in 2004 before winning two years later, Scheer declared that “Canada was built on Conservative values,” and that they’ll get the country back on track.

“Tonight, Conservatives have put Justin Trudeau on notice,” he said. “And Mr. Trudeau, when your government falls, Conservatives will be ready and we will win.”

Cold comfort. They won the popular vote, thanks to the stampede of anti-Trudeau resentment and alienation in Alberta that will only intensify. Conservatives got more votes in that province (which has 34 seats) than in Quebec and the Atlantic provinces combined (110 seats), helps describe the lopsided electoral results.

As the Liberal seat count from central Canada ticked up, retired nurse Susan Huff left her chair to take her white wine spritzer for a walk. The retired nurse, visiting from Yukon, found it tough to watch, worried as she was about her brother in Alberta and how a Liberal win would affect the oil economy there. Scheer is a good and honest guy, Huff said, but she hesitated when trying to account for why he fell short. “I don’t know if he was the dynamic person we needed,” she said as the last ice cube in her wine glass slowly melted.

RELATED: Federal election 2019: This is what the House of Commons will look like

Party volunteers wrangled a couple dozen attendees enlisted to be the sign-toting human backdrop for Scheer, standing on risers before a mega-sized Canadian flag. As they awaited the leader, they weren’t a cheerleader-ish bunch. One was Brent Bitz, who owns a Regina engineering company and lamented that the Conservatives’ fiscal responsibility and pro-business messages proved unattractive—that the rest of the country didn’t agree with the deep-blue Prairies. “There’s obviously a stronger voice in the East,” Bitz said.

Conservatives always knew this would be a challenge with a little-known rookie leader against a popular Liberal leader—albeit one with badly dented armour. They knew their climate change plan was a liability in cities and among young voters. Even winning more seats in a minority would have left Scheer scraping to win Parliament’s confidence to form government with progressive opposition parties. Beer glasses felt half empty at the Regina hall.

But Scheer was wise to hearken back to recent Conservative history, including just how inevitable a Liberal win in 2019 felt not long ago.

A couple years back, it was widely believed, even among Conservatives, that a return to power would be a two-election process. That sentiment coloured the Tory leadership race, keeping out heavyweights like Peter MacKay and Jason Kenney, and allowing a lesser-known figure in Scheer to snatch victory. After the SNC-Lavalin scandal erupted, a one-step Conservative victory suddenly seemed within reach. The MacKays of the world may have been kicking themselves; Trudeau’s scandal pushed Tories ahead in national polls for most of 2019. Could Scheer carry them over the line?

Throughout the campaign, Scheer dealt with the push and pull of a Conservative base that had come to see a sort of charisma in their taciturn former leader, Stephen Harper. Scheer, the former House Speaker, was supposed to be the smiling, dimpled version of his predecessor, but he led a party looking for someone to channel its contempt and anger toward Trudeau. Nice wouldn’t cut it. In the English leaders’ debate, Scheer ignored the first question to wind into a tirade against his Liberal rival, name-calling Trudeau a “phony” and “fraud.” The challenger was aiming straight for the jugular, and the hearts of stalwart Conservatives.

Over 41 days, Scheer seemed to grow into his role as chief attack dog and majority-seeker. More familiar with the script, more fired-up with his jabs, more able to parry or stonewall media questions. But in the final weekend, another episode revealed tension between the members and their mild-mannered leader. At a rally in Richmond Hill, Ont., Scheer shouted about Conservatives’ red-meat promise: to hold a public inquiry into Trudeau’s SNC-Lavalin scandal.

Scheer paused to take in reactions to the surefire crowd-pleaser, but on this Saturday night it worked too well. “Lock him up! Lock him up!” some supporters chanted. Scheer, the former order-seeking Speaker, raised his hand in a “stop” motion, and tilted his head to the side. “Well, well… or… lets… we’re going get to the bottom of his scandal. We’re going to vote him out! Vote him out!” The assembled Conservatives complied and changed their chant. Scheer did the obvious thing, to quell that Trumpian flare-up. But this was a reminder that there’s an underlying rage among Tory rank-and-file that their leader does not embody.

Over the coming weeks, months and perhaps years, a new push and pull will emerge among Conservatives: it will centre on whether 2019 Scheer is like 2004 Harper—the leader who can grow into his role with a larger caucus, and bring a united right-wing party to the promised land office, a few years later than partisans had hoped. Amid the mixed emotions, the raised and dashed hopes of this election, it won’t be easy for Conservatives to decide whether there’s a sequel to Scheer 2019.