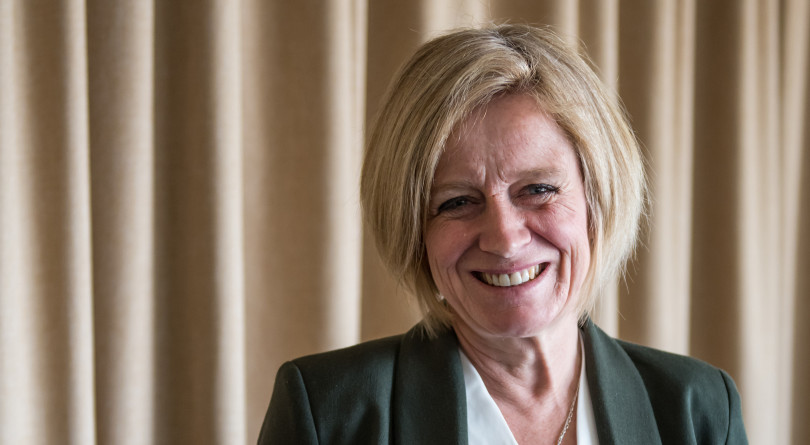 The Premier of Alberta Rachel Notley during an interview in Calgary on April 10, 2019. Notley is seeking re-election at the next provincial election. (Photograph by Guillaume Nolet)

This is the sort of pre-election piece a journalist writes that makes him look abundantly silly if voters don’t deliver the verdict the writer expects. But with polls and a daunting electoral map pointing to a United Conservative victory, I’ll risk the potential for mockery that starts the evening of April 16 and ends either never, or when the social media twerps move on (meaning probably never).

If voters oust her as premier, Rachel Notley should stay on as NDP leader. Her resignation would be Alberta’s loss.

Lately, Canadian voters have dumped premiers almost every chance they’ve had—Ontario, Quebec, B.C., New Brunswick and Manitoba. In each instance, the deposed premier has promptly relinquished her or his party reins, if he or she didn’t exit politics altogether. It’s reasonable for leaders to shoulder responsibility for a party’s fall—federally, Stephen Harper and Paul Martin both stepped aside before election night was over. But it need not become the standard. An Alberta NDP loss would come not because of the team captain, but in spite of her. According to several recent polls, Albertans believe she would make a better premier than Kenney (regardless of party affiliation), and her approval ratings have been higher. It’s the NDP that Albertans appear bent on replacing, not Notley.

Notley is intelligent, well-intentioned and a capable political leader who deserves respect. These aren’t just my views—they’ve also been shared by Jason Kenney himself, and many of his fellow Conservatives. Alberta has been fortunate the last couple years to have in Kenney and Notley two formidable politicians in charge of the main parties; it would be ideal for that to continue, no matter what the chirpy partisans on the winning side may say. Democracy benefits when the opposition benches have a chief critic whose talents compare to the premier’s, particularly when faced with major reform and attitudinal shifts in government of the kind Kenney has promised.

It always seemed Notley’s destiny to become Leader of the Official Opposition in Alberta, a role Grant Notley, her NDP leader father played for two years opposite Peter Lougheed in the 1980s before his death in a plane crash. In 2015, shortly after Rachel Notley became Alberta’s top New Democrat, the party’s dream was to dislodge the Wildrose party as the No. 2 party in the legislature, and Notley’s drive and passionate defenses of social services and the underprivileged would shine through, putting them in better stead to compete in another four years. The NDP’s surprising victory, taking the party from fourth place to first, denied Notley the opportunity to follow this two-step process.

Her resignation as party leader would also leave Alberta’s NDP completely rudderless and prone to drifting farther from the centre, to which Notley dragged the labour movement’s party. Losing Notley’s moderating influence increases the chance the NDP reverts to heavier reliance on its reflexively tax-and-spend, pro-union and oil-patch-wary impulses, alienating the party from the province’s mainstream and making it easier for the United Conservatives to dismiss their opposition criticism.

In Newfoundland and Labrador, Paul Davis stayed on as Opposition Leader for three years after he was ousted as Tory premier in 2015. And persevering a year or two as leader of the runners-up used to be more common—like Gary Filmon (Manitoba) in 1999, Roger Grimes (Newfoundland) in 2003 and Lorne Calvert (Saskatchewan) in 2007. Then-Prime Minister John Turner was crushed in the 1984 election but led the Liberals into the 1988 contest and through to 1990. It’s feasible for Notley to take this uncommon route in Alberta should she lose power. It’s equally hard to see the NDP as a competitive force in the next election without her—or someone of her ilk—at the helm. Nobody in the NDP currently performs near Notley’s level, which has long been a problem for her party.

For most of the Alberta Progressive Conservatives’ 44-year-reign, and for Social Credit’s 36 years in power before that, Alberta has had opposition leaders that ranged from listless to so-so, with caucuses that could fit into a minivan. One-party dominance of any stripe is a disservice to the public good. Notley remaining Opposition Leader could be Alberta’s bulwark against that.

You’re holding an outdoor campaign rally in mid-April. It’s snowing, damp and heavy. How to cope? Make a weather metaphor. “It’s been winter for far too long, but spring is right around the corner,” said federal Conservative Leader Andrew Scheer, picking a blustery day to visit Alberta’s campaign trail and lend support to his former federal Conservative colleague. Given that Kenney and Scheer each wants to defeat half of what they call the “Notley-Trudeau alliance,” it was no surprise that was their main theme. Kenney tends not to claim the Alberta premier is anti-oil like he alleges Trudeau is, but his guest was not so worried about nuance. “They are cut from the same cloth,” Scheer told the UCP audience. “They both have the same attitude toward our energy sector. They demonize those who have built an industry, who have constantly struggled and striven to improve what you do best every day to innovate, to support families.”

The NDP’s steady attacks on bigoted or intolerant comments by UCP candidates and the leader seem likely to form part of the Trudeau Liberal playbook. Scheer signalled in an interview with 660 News that he’s ready for the broadsides.

“They are the typical smears every time the Liberals or the NDP lose the debate on ideas, they go to these baseless personal attacks,” he said. This came hours after a Conservative senator’s remarks that downplayed the threat of white supremacy forced Scheer to pointedly declare that, yes, he completely denounces anyone who “promotes white nationalism, promotes any type of extremism.”

Kevin Libin on Kenney and Calgary’s pugilistic mood: “His promise to turn off the taps of oil and gas to B.C. may sound unsophisticated. It may be economically self-harming in the short term. It may even be unconstitutional. But it’s likely infuriated Calgarians don’t care about any of that. After four years of cancelled pipelines, carbon taxes, oil sands emission caps, tanker bans and the ongoing slander of their lifeblood fossil fuel economy by prime ministers, premiers and Toronto pundits, a lot of them just want to finally start hitting back, somehow.” (Financial Post)

Jana G. Pruden on ground zero of Alberta’s small-town opioid crisis: “Mr. Kenney has said he’d suspend opening any new sites and review whether current sites should remain open. Ms. Notley has said existing support for drug consumption sites across the province will remain in place. Speaking at her campaign office a few blocks away from the ARCHES site, Ms. Phillips says there’s clearly work to be done, but stresses the number of lives that have been saved by the service. ‘This is an area that is grappling with one of the worst opioid crises in the country. There are no easy answers with this drug. There are no easy fixes,’ she said.” (Globe and Mail)

Don Braid on Alberta politics turned toxic: “Most Albertans are more interested in solutions than anger or vengeance. They want good government, a strong economy, social fairness, and even—for somewhat older folks—a return to Alberta’s storied values of mutual help and social cohesion. These qualities are not coming back to politics anytime soon. The well is already poisoned for the next legislature, no matter who’s running it.” (Calgary Herald)

Chris Varcoe on a divided oil sector:  “Tuesday’s election will settle where Alberta’s climate policy is headed next. But it won’t resolve a split within industry on what’s the best step for an energy-powered province to take in a world that’s struggling to decarbonize.” (Calgary Herald)

Emma McIntosh on why climate change is not a campaign issue: “Albertans are the least likely in Canada to believe in climate change — last year, a poll by Canada’s Ecofiscal Commission, an independent economics organization, found 52 per cent of Albertans see conclusive or solid evidence that the Earth is warming. Sixteen per cent said there’s little or no proof, the highest rate of any province, the poll found. The same poll showed that 46 per cent of the Albertans who believed climate change was happening thought it was due to natural patterns, not human activity. ‘So many livelihoods in Alberta are tied to fossil fuels,” said Marshall. “Anything that threatens that industry is going to be really controversial.'” (The Star Calgary)

James Keller on the power of PACs: “When Alberta’s NDP government banned political donations from corporations and unions shortly after taking office, the goal was to root out big money from the province’s elections. But some of that money didn’t leave. Instead, it moved to third-party political advertisers that have collectively raised more than $1-million for the current provincial election campaign, mostly from large corporate and union donors. Several of those advertisers, also known as political action committees, or PACs, have been overtly campaigning for specific candidates or parties on both sides of the political spectrum. There have also been allegations that third-party groups have improperly worked directly with political parties despite a ban on co-ordination.” (Globe and Mail)

Barb Glen on the rancher running for NDP: “If he has surprised his friends and neighbours with his choice of political party, Gardner isn’t inclined to say so. ‘Ranchers’ wives frankly like [Alberta NDP premier] Rachel Notley and many, many, many, very, very, very conservative friends of mine stare at their boots and admit that they like Rachel. They think she is trying to do the right thing and Jason [Kenney, leader of the United Conservative Party] isn’t as trustworthy. I firmly believe that if Rachel Notley was a conservative male running this government, that we would all be talking about the best conservative government in a generation or two.'” (Western Producer)