The Trump-style drive to undermine confidence in the press has made its way to Canada. And it's showing signs of success 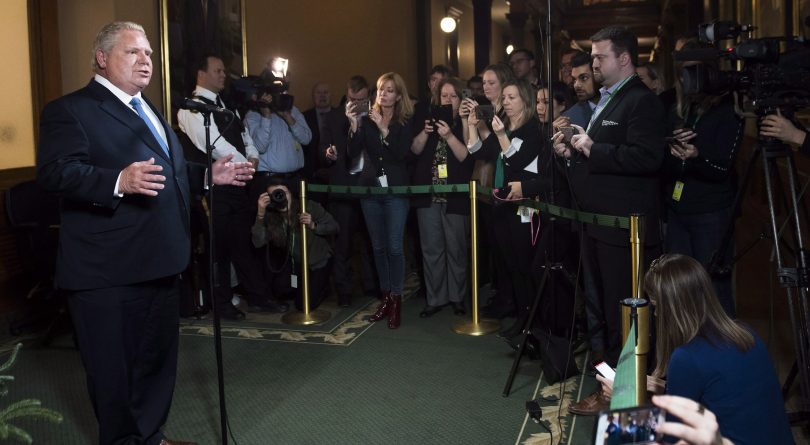 Ontario Premier Doug Ford speaks to the media about the appointment of the new O.P.P commissioner. (THE CANADIAN PRESS/Nathan Denette)

Here’s an exhaustive list of every politician who’s ever felt unfairly treated by the media: all of them.

The number of politicians showing open disregard for the function of a free press—through rhetoric or actions—is significantly smaller, but rapidly growing.

Donald Trump happily goes to war with the media claiming “fake news” and calling the press “the enemy of the people.” Ontario Premier Doug Ford is clearly taking his cues from Trump in his complaints over recent news coverage, be it of protest over his government scrapping plans for a French-language university or a potential conflict of interest in the hiring of Ford’s close friend to head the OPP. At a recent press conference, Ford claimed his biggest rival at Queen’s Park isn’t the Liberals or NDP. Rather, he said, “the Official Opposition is the media.” He later referred to reporters as the “Media Party”—the favoured epithet of extreme right-wing commentator Ezra Levant.

These slights have real importance, because recent history suggests this is more than just the griping of thin-skinned politicians. At a debate during the Ontario Progressive Conservative Party’s leadership race, Ford said conservatives needed someone like him who could “stand up to the media.” On the campaign trail, he snubbed reporters by abandoning the longstanding practice of hiring a media bus to follow him—which left many journalists behind, or scrambling to find the addresses of his campaign stops. During his limited media availabilities, he had one of his handlers hold the portable microphone reporters used to ask questions in order to prevent follow-ups.

Moreover, there are signs that those taking this page from the Trump playbook are parlaying success at the ballot box: the media made their qualms about Ford’s gambit known, after all, and Ontario voters gave Ford a majority mandate.

All told, the time-tested maxim that one should never pick a fight with a person who buys his ink by the barrel is quickly falling away—not least, say experts, because so few voters consume information written in ink, or sent to them over the airwaves.

Leaders like Ford and Trump get away with vilifying the press “because traditional media are often secondary to social media,” says Lydia Miljan, a political science professor at the University of Windsor. “Politicians don’t need the media like they did before. It was a symbiotic relationship in the past. Now, politicians can get the message out to their core audience—which aren’t necessarily mass audiences—without having to cater to traditional media norms.”

RELATED: Ultra-partisan social media is an addictive hazard—and detox is a last resort

And as social media proliferated to provide a more immediate—and unfiltered—means for political parties to address their voter base, the devolving political-media relationship coincided with declining readership and viewership of traditional news outlets.

“It’s changed dramatically, but the change is subtle if you’re not paying attention,” says Tim Abray, a Queen’s University PhD candidate studying voter psychology and a former press secretary to a cabinet minister in Mike Harris’s PC governments in Ontario. “Some politicians aren’t running against the media; they’re vilifying the media. There’s an important difference.”

Abray explains this trend as part of an ongoing effort to negate the effectiveness of unfavourable coverage in the mainstream media. “If you’re a partisan and want to maintain power, you want to neutralize critique as much as possible,” he says. “If the media is a major source of reliable critique, the best you can do is erode people’s confidence in that institution to provide objective critique.”

In short: if politicians undermine the media’s credibility, then whatever criticism of government emerges in the press is chalked up to media bias rather than a party or leader’s shortcomings.

Take former prime minister Stephen Harper, who’s telling voters not only that the media should be not be trusted, but that the press is actively trying to keep conservatives out of office.

“I have little doubt in my mind that [Jason Kenney] will be the next premier [of Alberta],” former Prime Minister Stephen Harper told a crowd at the chamber of commerce in Leduc, Alta. in June—an event in which the public could purchase tickets but media were not invited. “I’ll give caution on one thing… The media won the last election. The media elected the NDP. And the media is going to go out of their way to bring Jason and the party down. The media will go out of their way once they know the NDP can’t win of trying to invent some other option, some group of liberals or whatever, the Alberta Party, these are now the new and exciting guys and once again we’ll tell you it’s all safe and it’s [a] mainstream ticket. That is the game they’re going to play.”

RELATED: What on earth is Stephen Harper up to?

This week, Kenney himself has come under fire for picking fights with the press—including a recent testy exchange with a reporter who asked when Kenney planned to release his party’s campaign platform—and for “trolling the media” on Twitter. (To the many journalists who’ve enjoyed collegial relations with the media-savvy Kenney in his past roles as a federal cabinet minister and opposition MP, this is a striking swerve from previous behaviour.)

Such skepticism towards the Fourth Estate is hardly limited to right-leaning politicians—socially progressive and former Democratic presidential candidate Bernie Sanders also made known his problems with the media landscape. He has written about how corporate media threatens American democracy and how it ignores the rise of oligarchies. Besides, no one who sees him- or herself as a serious presidential contender likes to be called a “fringe candidate” by media pundits.

“As a general rule of thumb, the more important the issue is to large numbers of working people, the less interesting it is to corporate media,” the senator from Vermont wrote in his book, Our Revolution. “Corporate media, owned by large multinational corporations, are not all that sympathetic to ideas that attack the corporate establishment.”

Back in Ontario, in the 1990s, the NDP under former premier Bob Rae was so upset with coverage by the Toronto Star that the party had created its own newspaper—the Ontario Star—to promote its accomplishments without a critical filter.

Doug Ford and his PCs might’ve been taking a page from that book when they launched Ontario News Now, a social media account with TV news-style videos, in which the “reporter” asking questions is Ford’s campaign staffer Lyndsey Vanstone. Around the same time, PC staffers began showing up at government press conferences to clap loudly to drown out media questions—a gambit they abandoned after it made them objects of mockery on social media.

RELATED: Doug Ford, Jason Kenney and the end of the world

“Bob Rae had his issues with the media, and it was an antagonistic relationship at times,” Abray says. “But at no point did he question the legitimacy of media coverage. He had questions about the way things were being covered, but he didn’t bring into question the role of the media in democratic governance.”

“I regretted the ‘fake news’ the minute it came out of my mouth,” she later explained. “I shouldn’t have said that and I apologize.” (The apology, it should be noted, came almost two weeks after she said it.)

Still, calling out perceived media bias appeals to the Ford base, Miljan explains. “They’re distrustful of the media and feel the coverage has been one-sided, and the media doesn’t criticize to the same extent other parties,” she says. Some of their worries might be partially founded, as Miljan adds her own research has found journalists tend to be more liberal than conservative. (She wrote a book about it: Hidden Agendas: How Journalists Influence the News.)

“The problem with that strategy is it makes it difficult to grow your base,” Miljan adds. “And if you do something controversial that drives people away—or mobilizes the opposition—you’re more vulnerable to losing elections. It’s not a great long-term strategy.”

She points to Harper, who as PM was so determined to control the message he would limit the media to five questions at campaign stops. “Ontario News Now is exactly what Harper did with that 24 Seven that no one watched. It was pure propaganda,” Miljan says, referring to the Harper government’s weekly online video series. “The advisors probably think this is a winning formula to get elected, but it can backfire, as we saw with Harper. People started to viscerally hate him because he was so inaccessible.”

RELATED: Donald Trump waged war against the media. And won.

The good news for media is that—after years of decline—average trust in traditional and online-only media is now on the rise, from 51 per cent last year to 61 per cent in 2018, according to the annual “trust barometer” poll from the public relations firm Edelmen. Trust in social media, meanwhile is falling to record lows.

And while those trends mirror what’s happening in America, the president is not backing down in his scorn for media—nor are his supporters backing down from shouting matches with journalists at campaign events.

“We don’t have someone quite so iconoclastic as Donald Trump [in Canada]” Abray says. “But our politicians are using many of the same tactics Americans are using now. We ignore those similarities at our peril.”