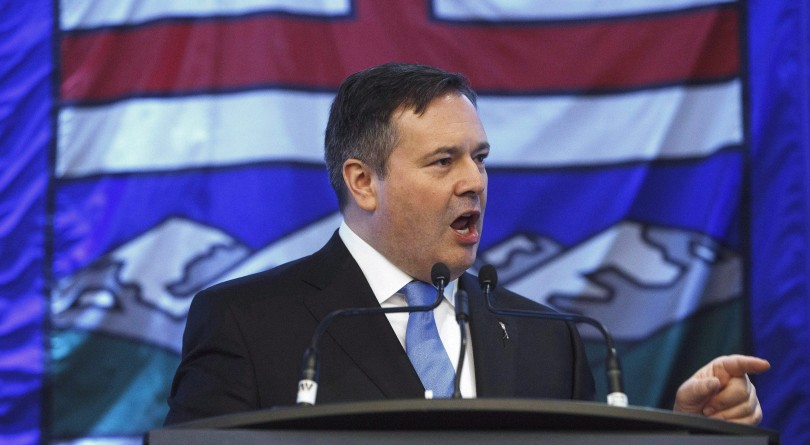 United Conservative Party leader Jason Kenney speaks in Edmonton. Defunding abortion is on the list of issues to be debated this weekend at the founding policy convention of Alberta's opposition United Conservatives. THE CANADIAN PRESS/Jason Franson

Jason Kenney, a man possessed enough to shed about 60 pounds in the last half-year, and determined enough to fuse two Alberta conservative parties into a monolith-in-waiting under his leadership, was verbose enough to speak to his convention audience Saturday night for more than an hour, stretching his script far beyond the 35 minutes it was supposed to last.

And he kept the crowd rapt over that hour; they stood to cheer and clap repeatedly—my ears are grateful we’re in the post-thunderstick age—as middleweight Kenney fired rhetorical slings at environmentalists and Prime Minister Justin Trudeau, and even some at Rachel Notley, the Alberta premier he’ll actually face off against.

One might forgive Kenney for shifting focus away from his immediate political rival, as polls have consistently shown his United Conservative Party slated to stampede to victory in the 2019 election, keeping the Alberta NDP a one-term wonder. Among the 2,600 United Conservatives at the convention centre in Red Deer, there was a buzz that reminded oldtimers of the heydays of former Progressive Conservative premiers Ralph Klein and Peter Lougheed. In those days, a party gathering was a reunion of grassroots and the ruling establishment. Alberta was a one-party state. There was one political show worth watching in town, and Conservative was its name.

Kenney spoke of his likely future as premier, but also urged partisans to keep working hard and be humble, to prepare for turbulence. “There will be good times and tough times for us ahead,” the UCP leader said.

He probably didn’t mean that tough times lay ahead the following day, as the party’s founding convention closed.

Kenney had also urged his followers to be disciplined. And a large contingent of delegates were: the social conservatives who had rushed into the party, wooed by Kenney’s own anti-abortion background  in federal politics and his “grassroots policy guarantee” to listen to the party membership. While many moderate Conservatives nursed Saturday night hangovers or enjoyed Alberta’s finally-here spring, the passionate UCP members who attended policy sessions passed one resolution that would require minors to get parental consent for abortion or other invasive medical procedures, and a similar notification requirement for kids joining after-school clubs that critics warned would “out” members of gay-straight alliances to their parents.

Kenney, like his former boss Stephen Harper at the federal level, has sought to steer his party clear of divisive social issues and political traps the Alberta NDP set with legislation on abortion protests and gay-straight clubs. United Conservatives on the convention floor had their own agenda to pursue while the leader had his governing ambitions to focus on. Before the NDP could race into Red Deer to denounce the moves, three UCP MLAs entered the policy debate to to impugn the resolutions with what sounded like NDP talking points.

“Let’s stop taking the NDP’s bait and let’s get ready to form the next government of this province,” UCP House Leader Jason Nixon said of the resolution demanding parental notification when kids join gay-straight support groups.

“We cannot out kids that are in a club to protect themselves,” said whip Ric McIver. “Don’t be called the ‘Lake of Fire’ party. I’m begging ya. This will severely hurt our chances of winning.”

The Lake of Fire reference carries a notorious resonance in Alberta conservative circles: in the 2012 provincial election, a Wildrose party candidate was revealed to have suggested homosexuals would burn in such a hellish water body, helping kill the opposition party’s campaign lead and giving the more centrist Tories another victory. NDP Education Minister David Eggen was delighted McIver got to that line before him: “Ric knows and the UCP knows very well that this is like poison for their party, for the prospects, for the future,” he told reporters.

Others in the the party’s inner circle took pains to assure Alberta’s fledgling LGBT Tory wing that this new policy would go nowhere, and shrugged off the grassroots’ decision. One official quipped: “This eye roll is off the record.”

As he built his anti-NDP provincial movement, Kenney sought to empower the grassroots, so it’s little surprise that in rushed the same sort of social conservative activist Kenney was in his youth. His carried on that zeal as an MP with the Reform and Alliance parties, before learning the merits of Harper’s preaching temperance on abortion and sexuality policy while the Conservatives were in office. The UCP leader was not on the floor of the convention this weekend as the moral right-wing flexed its muscles on the school club resolution. But in a final news conference, he followed the grand tradition of pragmatic leaders and discarded his grassroots’ wishes. Weeks earlier, Trudeau had done likewise with Liberal convention-goers’ resolutions, including one to decriminalize small amounts of hard drugs. Kenney declared he holds the platform pen, and will largely ignore the badly worded and “distracting” resolution on gay-straight alliances.

“Guess what? I’m the leader. I get to interpret the resolution and its relevance to party policy,” he said.

RELATED: The Conservatives don’t show up for Pride, and that’s a problem

About an hour after that declaration, his party members voted 76 per cent to 24 in favour of mandating parental consent for major medical procedures, which minors in most cases do not currently require. The motion was promoted by the Wilberforce Project, formerly known as Alberta Pro-Life. Even activists were surprised by the margin. Kenney wasn’t available to comment on that motion, but one official suggested that it too would be excluded from party policy. It’s unclear whether Kenney will embrace other party resolutions to lower income taxes on the wealthy to bring back an Alberta flat tax, or incorporate more private delivery and funding into provincial health care.

Kenney may hope to forget this brouhaha by next spring’s election campaign, but the experience of other parties suggests his rivals won’t let him. The federal NDP may have basically discarded the anti-oil, anti-pipeline Leap Manifesto its 2016 convention tentatively embraced, but former Saskatchewan premier Brad Wall used it as a cudgel on Saturday in his speech introducing Kenney to the convention. In 2012, the Wildrose tried to shrug off its social conservatism as “bozo eruptions;” six years later, anti-abortion and LGBT-unfriendly motions are not rogue utterances but the expressed will of the base of the new, unified party.

However, 2012 is not 2018 in other key ways. Alberta’s oil economy was humming six years ago, and the ruling Tories were the safe choice. Unemployment and economic anxiety are foremost in today’s provincial psyche, and weigh down the Notley NDP’s popularity. Social conservative brushfires that Kenney races to douse might mean the difference between his party winning 60 and 70 seats in Alberta’s 87-seat legislature (polls put them currently closer to the latter territory). But it’s hard to imagine them costing him power.

If anything, talk about teenage reproductive rights and homosexuality served to shift attention away from action promises Kenney had actually made on Saturday night. He pledged a “war footing” against critics of oil sands and pipelines.

“We will set up a fully staffed rapid response war room in government to quickly and effectively rebut every lie told by the green left about our world class energy industry,” Kenney said. “And I like this one: if companies like [Europoean bank] HSBC decide to boycott our oil sands, our government will boycott them… We will go to court if necessary to get the federal government to strip charitable status from bogus charities like Tides Canada and the David Suzuki Foundation.”

This is policy-making born of grudge, grievance and defensiveness, well beyond core duties of a premier. And it’s for a time when Albertans feel beseiged, as pipelines get blocked and carbon emissions get taxed. These promises unite the UCP base, and might even excite centrist voters who applauded Notley punitively blacklisting B.C. wine earlier this year.

The NDP and other Kenney foes will spend a lot of time hammering on the social policies he’ll pledge not to adopt. They may have a harder time fighting the striking measures he actually stands for.