Why Justin Trudeau used the c-word—'colonialism'—in his apology

With a few simple phrases, the Liberal PM linked misguided ideas of past governments to present policy—and to the future 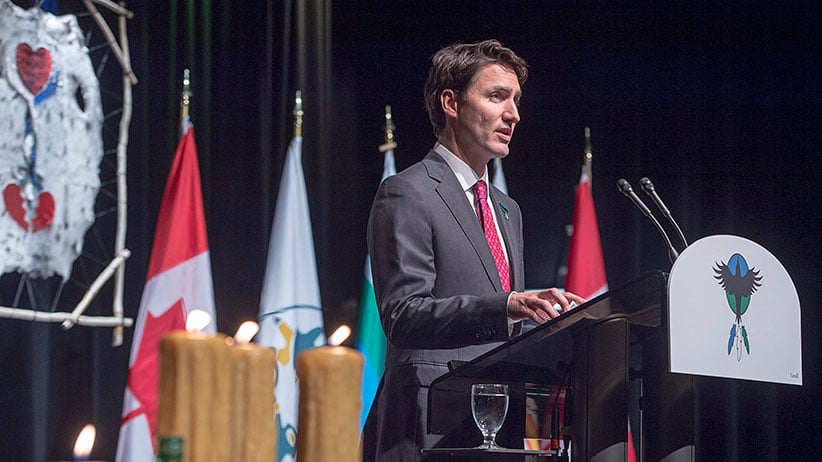 Prime Minister Justin Trudeau delivers an apology on behalf of the Government of Canada to former students of the Newfoundland and Labrador Residential Schools in Happy Valley-Goose Bay, N.L. (Andrew Vaughan/CP)

As the two prime ministers were basically to officially denounce the same historical ill, nine years apart, Justin Trudeau’s apology for residential schools in Newfoundland and Labrador bore most of the same themes as Stephen Harper’s apology for the same federal policy in the rest of Canada. Both began by calling it a terrible chapter in Canada’s history—a “sad” one, in Harper’s words; “dark and shameful” in Trudeau’s. They both spoke of the abuse inflicted upon students, the lasting social and cultural impacts and the impediment a lack of federal apology posed to healing.

There was one key word the Liberal PM used, though, that his Conservative forerunner shied away from: “colonialism.” The word popped up four times in Trudeau’s speech in Goose Bay:

Children who returned from traumatic experiences in these schools looked to their families and communities for support but, in many cases, found that their own practices, cultures and traditions had been eroded by colonialism…

Unfortunately, many of these intergenerational effects of colonialism on Indigenous people continue today…

This is a shameful part of Canada’s history – stemming from a legacy of colonialism, when Indigenous people were treated with a profound lack of equality and respect…

To be fair to Harper, his 2008 address in Parliament did criticize the wrongheaded premises on which residential schools were based: the notion that Indigenous cultures and beliefs were inferior. “There is no place in Canada for the attitudes that inspired the Indian residential schools system to ever again prevail,” he said. But though he addressed the underlying attitude, Trudeau’s predecessor declined to talk about the outlook and philosophy that led to apartheid, cultural domination and genocide around the world.

The word may be inteneded as a gesture of openness by Trudeau, says Matt James, a University of Victoria political scientist who studies apologies. “The whole discourse of colonialism and decolonization is very much on the lips and minds of Indigenous communities and leaders, and it’s a language the previous government did not use,” he says.

There is value in the word, and acknowledging Canada’s colonial past in a global context. “It helps us understand why (context) residential schools happened; but more importantly, it links the past to the present and then the future,” Jacqueline Romanow, chair of University of Winnipeg’s Indigenous studies program, tells Maclean’s in an email. “This helps all citizens realize the colonial remnants of current policy (Indian Act) and attitudes (racism, unconscious bias) that linger.”

It’s not the first time Trudeau has wielded the concept, which has primarily been the domain of progressives rather than conservatives like Harper, who by definition have more reverence for the past. When Trudeau split Indigenous and Northern Affairs Canada into separate departments for services and Crown-Indigenous relations, he criticized the “paternalistic, colonial way” of governing that the Indian Act helped entrench. Carolyn Bennett, the new Crown-Indigenous Relations Minister, spoke of “decolonizing,” signalling desire for a sharp break with the past. There is now federal acknowledgement of colonialism in both the structure of government-Indigenous relations and one of its most damaging policy outcomes, residential schools. It’s safe to assume this government will employ the term in other contexts—pervasive philosophies have their way of sticking to lots of things. How will they decolonize? As always, words prove much easier than action.

Canada, before 1867, was a colony of an expansionist Great Britain. It’s small wonder that colonialist mindset infected the country’s early political leaders. Indigenous thought leaders have been stating Canada’s colonialism as plain fact for ages, and often argue that colonialism continues today. We now have official acknowledgement that Canada’s legacy toward Indigenous people is one of colonialism.