Opinion: As long as Doug Ford acts reasonably the Liberal attacks trying to paint him as some sort of devil are just the desperate words of a dying regime 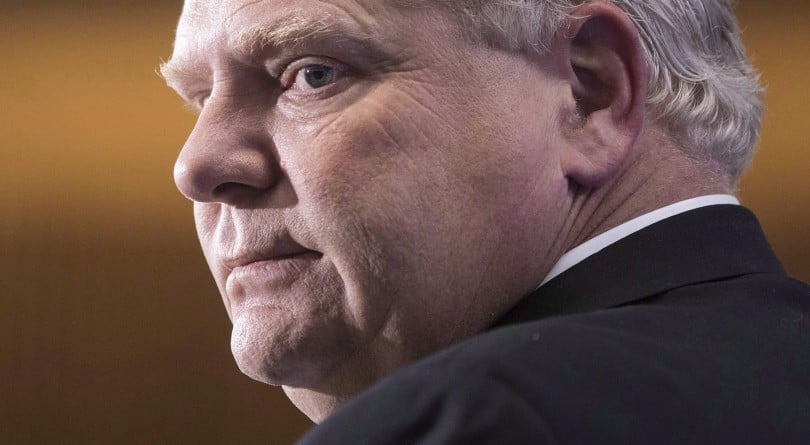 “There’s the Doug Ford you think you know,” blared a mid-April Liberal attack ad, “and then there’s the real Doug Ford.” The pre-writ spot went on to chronicle Ford’s plans to turn Ontario into a hell where (and I’m paraphrasing here) budgets do stupid things like balance and women have no control over their bodies.

We’re now into mid-May and, pace Kathleen Wynne and her surrogates, Doug Ford, if you go by what he actually says and does, makes for a dime-store Satan. It turns out Lucifer is actually a brusque and somewhat dull teddy bear, one that’s a demon only to Kathleen Wynne and the Liberal Party.

“After 15 years of waste, this Liberal government is desperate to hold onto power,” Ford tweeted Monday to kick off the opening week of Ontario’s provincial election. “I will run a government that respects the taxpayer. I will reduce wait lines, put more money in your pocket and reduce hydro rates. I will run a govt for the people,” he added. Blunt words, but not the horns and hellfire Ontarians were promised.

Fine. If no animus in the man, how about his party? Nope. In fact, the message on the Ontario PC homepage is downright festive: “I have a message for Kathleen Wynne. The party with the taxpayers’ money is over.” That sound you’re not hearing is “ordinary hard-working” Ontarians soiling themselves.

READ: ‘The Ontario PC Party has entered into this election without any platform at all’ – Letters to the editor

But surely there have been Tory slip-ups in the hothouse of social media? “It doesn’t matter what party you supported in the past, Liberal, NDP, PC,” Ford tweeted this week. “ People all across Ontario are coming together, ready for change,” he added. Stop it, Doug, you’re killing us.

Hang on. What matters is words, not deeds. So what has Doug Ford done this first week of the campaign? Promised to terminate abortion on demand? Not quite.

This week Ford promised to: get “back to basics” on math; “scrap” Wynne’s “ideological” sex-ed curriculum; spend an additional $5 billion on GTA transit; and cut taxes by 20 per cent on income earned between $42,963 and $85,923, a move the Tories claim will save people $786 per year. Looking to rub salt in his enemies’ wounds with his “middle-class” tax plan, Ford added: “Our plan is affordable, responsible, and modest.”

The Liberals have been so disappointed in Ford’s anodyne campaign they’ve taken to … attacking the NDP. “NDP Candidate Advocates for a 15% Across the Board Cut in Teacher’s Pay,” an early war room press release screamed, unveiling the true Liberal enemy now that the party has slipped to third in a number of polls.

Team Wynne has also apparently sent for Zita Astravas, an issues and crisis expert last seen putting out the fire in Harjit Sajjan’s turban, to where it had spread after the federal defence minister set his pants alight with tall tales of glory as the architect of a major battle in Afghanistan. The move for a defence specialist makes sense now that the Liberals’ main task is to preserve as many seats as they can.

Hey, it’s only week one. A few reasonable days for Ford does not a trend make. He could still peel off his skin to reveal his true self any day now. Andrea Horwath could also morph into Mike Harris. For that matter, the Liberals could hit on a message that doesn’t reek of desperation. But the early Liberal shift to attacking the NDP and calling for reinforcements from their federal brethren aren’t signs of confidence.

Even though it hasn’t (yet) panned out, the Liberal move to tar Ford was the right one. What other play did they have? Despite the notoriety of his late brother Rob, most Ontarians didn’t — and still don’t — know Ford. But an attack only works if it hits on a fundamental truth, or if the subject lives up to billing. As long as Ford acts reasonably the Liberal attacks are just the desperate words of a dying regime.

The irony, of course, is that, despite the promise of right wing fire and brimstone, Ford isn’t much of an ideologue at all. On anything. You’d have better luck nailing jello to a wall. Despite his core mantra of respecting the taxpayer, there’s no sign of a plan detailing how Ford will pay for his gusher of spending. Expect more calls, then, for Ford to outline what he will cut to make it all add up.

Then again, who’s going to (credibly) light up Doug Ford for reckless spending? Kathleen Wynne? Andrea Horwath? The media? The best chance lies with the latter, but with a base that’s hungry for power after 15 years in the wilderness, and a broader electorate that’s also feeling the need for a change, any warnings about Doug Ford from the media are also likely to fall on deaf ears.