Why should Jagmeet Singh have to meet racist heckling with ‘love and courage’? 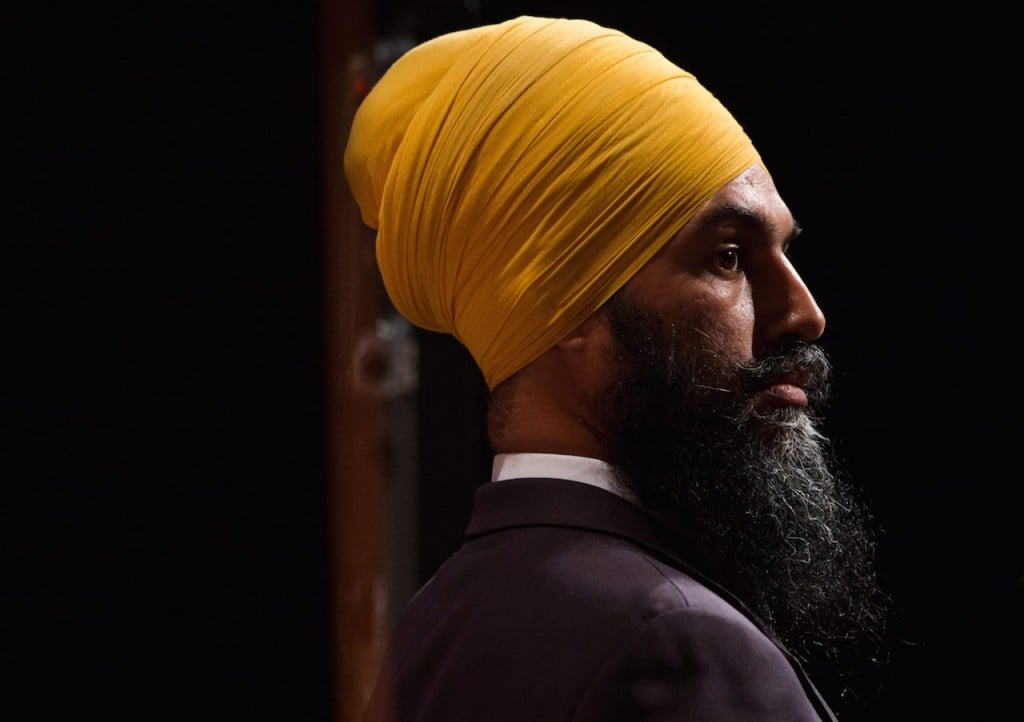 Jagmeet Singh listens during the final federal NDP leadership debate in Vancouver, B.C., on Sunday September 10, 2017. Online voting begins September 18 with results announcement events being held after each round of balloting until a new leader is elected. The first announcement will take place on October 1 and if no candidate receives a majority an additional two rounds could follow. THE CANADIAN PRESS/Darryl Dyck

Last week, federal NDP leadership hopeful Jagmeet Singh was confronted by an angry white woman named Jennifer Bush at one of his “JagMeet & Greet” campaign events. In a video of the incident, which has been viewed hundreds of thousands of times, she stands in front of Singh, pointing her fingers in his face and pressing towards him, so much so he has to lean away. All the while, she accuses him of being “in bed with” sharia law and the Muslim Brotherhood.

A man and a couple of young women attempt to gently direct Bush away from Singh. She threatens to call the police if anyone touches her. Singh, who has stayed calm throughout, begins to talk over her, leading the crowd in a chant of “love and courage, love and courage.” Frustrated that Singh hasn’t taken the bait, Bush leaves. Then Singh, who is Sikh, tells the crowd, “Growing up as a brown-skinned, turbaned, bearded man I’ve faced things like this before. It’s not a problem, we can deal with it.”

Singh’s chill poise and graciousness have been widely praised. He diffused the situation, steadied his volunteers and staff, and soothed the crowd. It was a politically masterful moment. Singh isn’t that well-known outside of Ontario, where he’s a member of the legislature and where he served as deputy NDP leader, and this incident, in its own awful way, offered a glimpse of the temperament he’d bring to the House of Commons: warm, inclusive, unflappable. And in the savvy deployment of his campaign slogan, “love and courage,” he called back to the optimistic, personable and popular leadership of Jack Layton, who wrote, “love is better than anger” in a moving letter to Canadians just before his death.

But all the admiration for Singh’s response to Bush overshadows another element of his leadership bid: that as a brown-skinned, turbaned, bearded man in politics, Singh has faced a barrage of hatred. And the delight in how deftly Singh dealt with Bush minimizes the degree to which attitudes like hers infect our culture and political process. By focusing on Singh’s measured message of compassion, Bush can be conveniently written off as a random kook, rather than be taken seriously as representative of deep and pervasive strains of racism and Islamaphobia in Canada.

There’s an unfair burden placed on people who experience oppression and discrimination to rise above it, or turn the other cheek. Those targeted on social media are told not to “feed the trolls.” Victims who forgive people who’ve caused them unspeakable harm and trauma are celebrated for their generosity. I’m in no way criticizing these reactions — they’re personal, and they can be sanity and soul preservers. But they aren’t the only appropriate, commendable or worthy responses to hate and violence.

On Twitter, Sheila Sampath, a journalist, activist and academic, posted a thoughtful thread on Singh. In it she praised him, but also asked, “Is this the template for POC [people of colour] when we are attacked? To say ‘we love you’ to our attackers? Are we not allowed to feel the pain from those attacks? And to express that pain as complex human beings? To expose the trauma?” Victims of racism and other forms of discrimination and hate mainly receive sympathy and applause when they swallow their anger and hurt, rather than express it. “Love and courage” is a wonderful approach, but it shouldn’t be used to dismiss the reality of “rage and fear.”

There are many, many people in Canada for whom Singh’s historic leadership bid feels personal, whether or not they’re NDP supporters. If he wins, he’d be the first person of colour to led a major federal party. To have someone running for this level of political office who looks like you, or shares some part of your history, or who has stuck up for your civil rights and humanity, as Singh has done in his opposition to racial profiling by police, is a profound thing.

When I think of Bush, up in Singh’s face and itching for a fight, I think about how frightening and hurtful that must have felt for some people in attendance, how in her attempts to demean Singh, Bush was also trying to demean them. I think about the power dynamics at play: Bush’s entitlement in accosting a public figure, because as a white woman, she doesn’t get routinely harassed or questioned by police, and Singh’s careful restraint, because he is someone who has been routinely harassed and questioned due to his race and his turban. (He’s been stopped by police close to a dozen times, beginning when he was 17.) The stakes of what could be perceived as a less-than-perfect reaction are so, so much higher for Singh, both as a politician and a person.

And there are more hateful agitators where Bush came from. She’s a regular presence on the far-right protest circuit that includes anti-Muslim groups like Rise Canada. Andray Domise reported on both the overt racism that’s been directed at Singh (hecklers like Bush have been common) and the more implicit variety. Singh’s fitness for leadership has been questioned by political columnists and opponents in their suggestions that Singh, a criminal defence lawyer who’s been an MPP for six years and deputy leader for two, is an “insurgent” and unqualified candidate.

Last week’s confrontation with Bush is unlikely to be the last time Singh will have to draw on love and courage in the face of bigots. But his response shouldn’t continue to be the focus of the story. Instead we need to grapple with what it means for all of us, and for our democracy and our future, that such forceful and hateful opposition is being directed at a political candidate because of his race and religion.