Both sides of the Canadian political spectrum are spoiling for a fight and reasoned debate is at risk. With an election looming, it's time to raise the alarm. 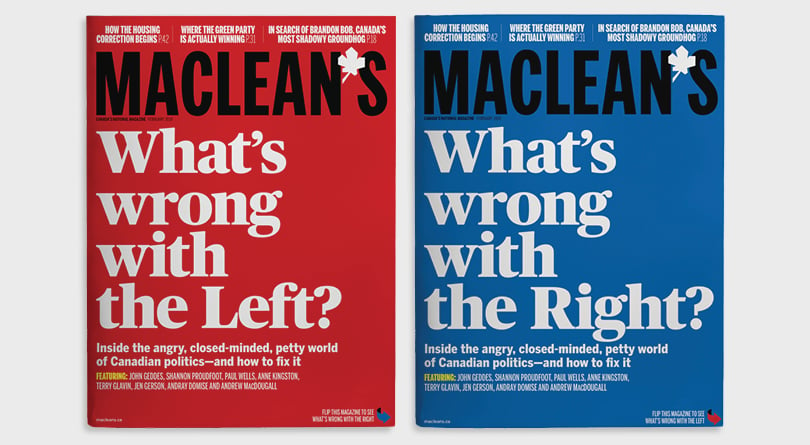 We photographed Foreign Affairs Minister Chrystia Freeland for our post-NAFTA issue with the headline (our words): “You’re welcome, Canada.” Cue indignant partisan outrage. (If you didn’t feel any anger about that cover, the story we wrote for you is here, “What’s wrong with the Left?“)

And then, most recently, another cover—or one of the dozens of homemade versions it inspired—may have appeared in your feed. It featured five white men, conservative politicians all, united against Justin Trudeau’s carbon tax. We headlined them “The Resistance” in an ironic twist on the term and . . .

Whoosh. (If you didn’t experience indignation about that cover, the story we wrote for you is here, “What’s wrong with the Right?“)

Our objective in this unique project (this month’s print edition features a ‘tumble cover’—the left on one side, the right on the other) is to note our nation’s increased polarization on the eve of the 2019 federal election. And to raise the alarm. Both sides of the spectrum are spoiling for a fight to such an extent that nuance, irony and reasoned debate are at risk.

Carbon taxation clearly is one issue that moves everyone—polling data reveal taxes and debt as the most important issues to the right in Canada, while climate change and the environment are the most important on the left. Add the potent mix of race and power (in the case of our cover, an abundance of privileged white men) and up in flames goes any reasoned debate.

Why such an incendiary reaction? It’s partly rooted in growing tribal divides. As one compelling thesis states, a “thickening” is occurring around political views. Writing in the Wall Street Journal, Republican Sen. Ben Sasse says: “All of the traditional tribes that have sustained humans for millennia are simultaneously in collapse. Family, enduring friendship, meaningful shared work, local communities of worship—all have grown ever thinner. We are creating thicker, more vehement tribes around our political differences, I believe, because there is a growing vacuum at the heart of our shared (or increasingly, not so shared) everyday lives.”

In her book Political Tribes, Amy Chua reminds us there’s a reason why reaction to Beyoncé’s 2016 Super Bowl halftime show, in which she tipped her hat to Black Lives Matter, was so divided (“Half the country deified her, while the other half accused her of ‘cop killer entertainment’ ”). It has to do with fear. “Every group feels attacked, pitted against other groups not just for jobs and spoils but for the right to define the nation’s identity,” Chua says. “In these conditions, democracy devolves into zero-sum group competition—pure political tribalism.”

Sasse and Chua write about the United States, but polarization has arrived here, too. An insightful analysis from Frank Graves at Ekos shows the number of Canadians who say they are neither small-‘l’ liberal or small-‘c’ conservative dropped from 47 per cent in 2002 to 17 per cent in 2017.

For the purposes of this project, we’re including political movements, academics, voters, political leaders and internet trolls in our wide definitions of the left and the right. We concede the many ways in which this is a false dichotomy—as Anne Kingston notes in her column for this package, our schisms are too complex to be reduced to directional adjectives, however well they play on magazine covers.

But if our “The Resistance” cover served as a Rorschach test for a nation’s most deeply held beliefs, the reaction helped illustrate that hope lies outside our individual echo chambers.

We saw this in action when Paul Dewar, a former NDP MP who was recently diagnosed with fatal brain cancer, was awarded Maclean’s Lifetime Achievement Award at a fall gala ceremony in Ottawa. In the midst of his powerful acceptance speech to the crowd of MPs from all parties, he paused with a request.

“Whatever your history,” he said, “please turn to the person close to you, tell them your name and why you got interested in politics. I’ll give you two minutes.” The crowd dissolved into a loud mass as MPs talked with MPs. It was a clattering, hopeful noise. And then time was up.

“I want you to think about this for a moment,” Dewar continued. “What if the House of Commons could be like this? What if we could go across the aisle, introduce ourselves and share not only our motivation for entering politics, but hey, you might even agree with a few of the issues, and perhaps even work together. Wouldn’t that be truly radical?”

As Ekos tells us, we are all on one side or the other now. And we’re going to have to figure out how to talk to each other.