Why wouldn't the Liberals and NDP make a deal to replace Stephen Harper?

Why not a coalition? Or at least an accord? 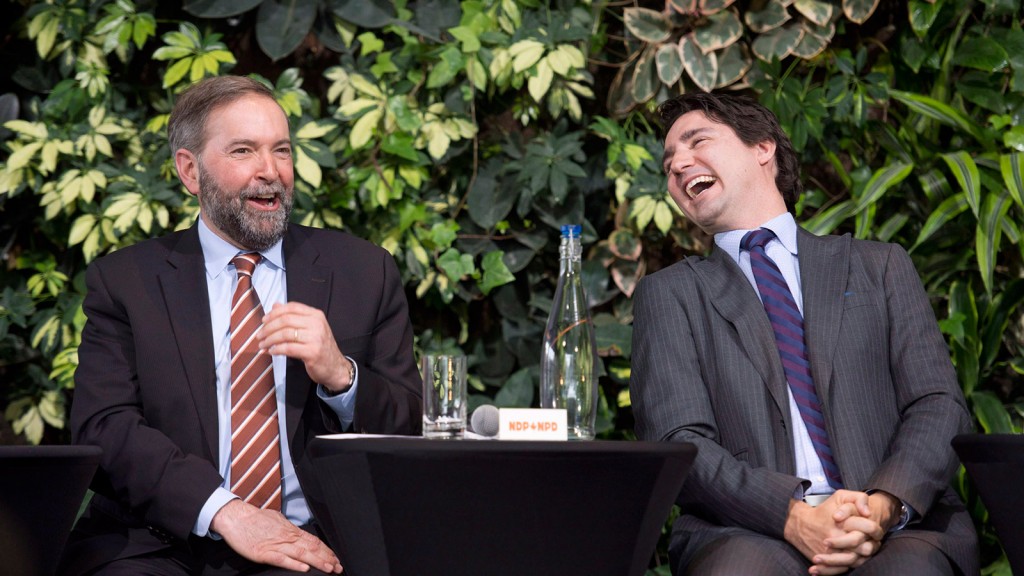 In case you were wondering, Thomas Mulcair is indeed still willing to consider forming a coalition government with the Liberals after this year’s election.

When I wrote about the myriad possibilities of this year’s federal election (and, separately, some of the relevant historical precedents), I didn’t dwell on the particulars of this possibility, but it is the most likely source of intrigue and the potential considerations are fun to parse.

The prospect of some sort of arrangement between the Liberals and NDP becomes most interesting if the two parties finish with the second-most and third-most seats, but the Conservatives win less than a majority. And that together, the Liberals and New Democrats would constitute a majority. So let’s take that as the hypothetical starting point.

At last report, Justin Trudeau was less interested in the idea of a Liberal-NDP coalition. But a coalition is only one option for co-operative governance.

A coalition should probably be defined as a very specific thing: an arrangement of two or more parties to govern together with cabinet spots shared between them. Think of the current cabinet in the United Kingdom that resulted from a coalition agreement between the Conservatives and Liberal-Democrats. But two or more parties could also sign an accord—a formal deal that ensures support in the legislature for an agreed-upon agenda. One precedent for this would be the Liberal-NDP deal in Ontario in 1985. This could also be described this as a confidence-and-supply agreement.

And if you need something to do for an afternoon or for the next seven months, go ahead and speculate about the political calculus here.

According to the account of NDP strategist Brian Topp, the possibility of an accord was floated during negotiations between the Liberals and New Democrats in 2008 because some Liberals were hesitant about the prospect of sharing cabinet with the NDP. The New Democrats insisted on cabinet spots, and after going back and forth with counter-offers, it was agreed that the NDP would get six ministers in a 25-person cabinet.

So imagine the Liberals and NDP finish second and third this October. Would the Liberals be willing to negotiate an accord? If the Liberals refused to enter into a coalition, would the New Democrats be willing to sign an agreement that didn’t include cabinet portfolios? On one hand, the NDP wouldn’t get the authority and credibility that comes with being in government, something that could otherwise be an important step for a party that has never formed government at the federal level. On the other, an accord would give the NDP some distance from the government, something that could come in handy whenever that government experienced controversy or scandal (and, later, in a subsequent election).

Or flip the seat count around and guess at what the Liberals would do. Would the Liberals, even if opposed to a coalition, be otherwise willing to formally support an NDP government?

Underneath those considerations is a basic question: Despite having the opportunity to do otherwise, would the Liberals or New Democrats be willing to let the Conservatives remain in government? And if so, why?

In the event that the Conservatives were to lose their majority, Stephen Harper’s leadership could conceivably be in question: the Prime Minister either choosing to step aside or forces within his party pushing him to do so. How would that factor into Liberal or NDP calculations? Would either party wager that it’d be better for them to wait and hope to force another election, at which point they might hope to win a majority or at least a stronger hand?

For that matter, would the Conservatives, in the midst of changing leaders, be willing to make a deal with either of the Liberals or NDP to stay in power long enough to do so?

You can spin this off in various directions—there is also a fun constitutional question about whether the Governor General might ask the second-place party to form a government even in the absence of an agreement between that party and another party—but the easiest pressure point is a Liberal-NDP deal. And so perhaps the question is this: Could either party possibly justify not working with the other to replace Stephen Harper and the Conservatives?

When Paul Adams kicked around the possibilities in January, he concluded that pressure to do so would force the parties together.

Campaign rivalries might make it difficult for the Liberals and NDP to work together to oust Harper after the election. But those same dynamics would make it impossible for them to explain to their supporters why they’d prop him up. They’d be under pressure to find a way, soon after Parliament meets, to dump the Harper Conservatives. And they would.

Greg Fingas, a New Democrat supporter in Saskatchewan, went to this same point in a post in February.

My guess is that if members raise enough hue and cry, every party will eventually acknowledge that opposition co-operation is a valid and reasonable means of bringing about change—and that it’s a lot easier to justify co-operating to change governments than to explain what conditions would make it worth leaving the Cons in power. But unless supporters make clear that there’s a price to be paid for pretending otherwise, we’ll go through another campaign with opposition parties and candidates undermining the theme that Harper has to go.

If, together, Liberals and New Democrats constitute a majority of the MPs elected this fall, the onus might not be to explain why they should make a deal, but why they shouldn’t.

Of course, this could all be academic. The Conservatives could win a majority. The combined numbers of the Liberals, New Democrats and Greens could somehow fall short of a majority. The Liberals or New Democrats could win a plurality of seats and decide to try governing on a case-by-case basis as the Liberals did from 2004 to 2006 and the Conservatives did from 2006 to 2011 (a Conservative party in the midst of switching leaders would probably be loath to defeat the new government).

But, again, this is all still worth kicking around, I think. Even if only to remind ourselves how a government is actually formed in our system.