Will 2021 end the era of the disinformed voter?

Stephen Maher: Millions of voters were led believe things that weren't true, aided by Trump, Russia and social media. The West is finally waking up to the threat. 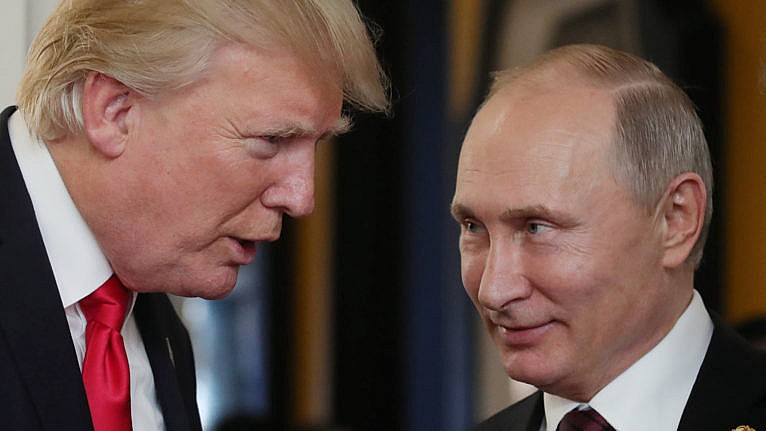 Trump talks with Putin at the APEC leaders' summit in Danang, Vietnam, on Nov. 11, 2017 (MIKHAIL KLIMENTYEV/SPUTNIK/AFP via Getty Images)

As the curtain drops on this wretched year, we are watching the grim last scenes of a political drama set in motion in 2016 when Donald Trump came to office thanks in part to foreign disinformation.

The United States is profoundly weaker at the end of this difficult period—beset by COVID and wracked by internal differences that threaten to lead to mass violence.

Disturbingly, though, many voters continue to support Trump in the face of his obvious failings.

Trump finished 2020 by pardoning dozens of criminals, including key associates who helped his campaign connect with Russian intelligence during the election, but he has yet to comment on the (presumably Russian) SolarWinds hack that has devastated Western computer systems in ways that will take years to even figure out.

But the president is so popular that Republicans cannot bring themselves to denounce him for letting so many crooks out of prison. The continued support for Trumpism has overturned seemingly reliable assumptions about the range of possible election outcomes in advanced Western democracies. Large numbers of Americans are beyond reason.

Our assumption about how elections work—the idea that rational voters assess their options based on a shared understanding of reality—is inoperative when large numbers of voters believe that the chief justice of the U.S. Supreme Court is the leader of a pedophile ring, that 5G towers cause COVID, that Dominion Voting Systems was designed by Hugo Chavez to steal the presidency from Trump.

The suicide bomber who blew up an RV in Nashville, Tenn., on Christmas Day apparently believed lizard people masquerading as humans were taking over the world.

Even Nova Scotia’s mass shooter apparently believed in a conspiracy theory about Justin Trudeau and COVID, and some firearms activists are spreading a conspiracy theory that his rampage was a false flag operation carried out by the government to provide cover for gun seizures.

In the United States, millions watched Plandemic, a documentary full of harmful conspiracy theories about COVID 19, and anti-vaxxers and anti-maskers have made the response to the disease more difficult.

A large and growing part of the American electorate is disinformed. They believe things that are not true because they have been induced to do so.

There are some clues in the story of Cambridge Analytica, the British company that helped win the 2016 election. The company, which didn’t survive the post-election public scrutiny, was bankrolled by Robert Mercer, a secretive right wing American billionaire who got rich writing algorithms that beat the stock market.

Mercer put tens of millions into the hands of Cambridge Analytica CEO Alexander Nix, a smooth Etonian who specialized in dirty electoral tricks in developing countries. Nix was forced out later, after he was captured on camera hinting that he could lure politicians into honey traps for money.

Steve Bannon—who later was banned from social media for calling for the execution of Anthony Fauci—brought Mercer and Nix together, and together they turned it into a “company that weaponized research in psychological profiling,” in the words of Christopher Wylie, a Canadian programmer who eventually wrote a book, Mind***k, about his experience working for them.

Cambridge Analytica bought huge amounts of Facebook data—87 million profiles—from a professor who collected it from seemingly innocent quizzes, and used it to research political and social attitudes and then target messages using dark advertising—messages that are only visible to the recipient.

At the heart of the operation, according to Wylie, was Bannon’s framing of race relations as a zero-sum game, a technique for cultivating white resentment, framing political correctness as an “identity threat,” so that complaints about racism had a “boomerang” effect on white voters.

“In this way, if you could frame racialized views through the lens of identity prior to exposure to a counternarrative, that counternarrative would be interpreted as an attack on identity instead. What was so useful for Bannon was that it in effect inoculated target groups from counternarratives criticizing ethno-nationalism. It created a wicked reinforcement cycle in which the cohort would strengthen their racialized views when they were exposed to criticism.”

You can think of this white identity as an information carapace, a shell that prevents other messages from getting through.

The Russians, who have deep and mysterious links to Trump, helped build that carapace, as some of the people Trump pardoned might tell us, if he hadn’t pardoned them.

The Russians funded Facebook ads—visible only to the recipients—that discouraged black voters from voting for Clinton because of her record on incarcerating blacks. They set up astroturf Facebook Black Lives Matter groups, and groups opposed to Black Lives Matter, set up events in U.S. suburbs from their Moscow headquarters, did what they could to spread racial animosity.

The West is waking up to the threat posed by disinformation. Social media networks have been forced to put controls in place, and lawmakers appear less dazzled by Silicon Valley glamour and more focused on the problem.

We are lucky in a way that Trump was so incompetent. If he had listened to public health officials and managed the pandemic in a minimally competent way, he would likely have won the 2020 election.

Instead, early in 2021 there will be a normal politician in the White House, and Trump will face legal challenges. Those problems, and the loss of the trappings of office, may undercut his connection to his voters, or they may strengthen his bond with voters, since every attack on him will seem like an attack on them.

That process will test the carapaces of his supporters, and should tell us whether Trump is a symptom or the problem.