Will Elizabeth May walk?

After a divisive convention, the Green Party leader may be headed in the direction of another political party 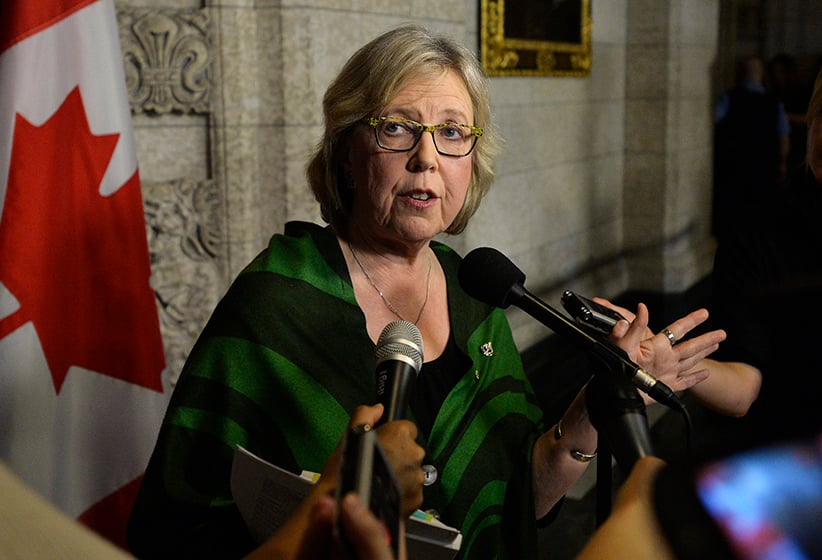 Elizabeth May is currently on a walk in the snow. That’s a metaphor—though given August flurries seen in Calgary last year, a mark of the very climate change that propelled May into the political arena in the first place, it could well be literal. The leader of the Green Party of Canada made it clear in a series of interviews last week that if her party doesn’t recant its vote supporting the controversial Boycott, Divestment, Sanctions (BDS) campaign against Israel at its recent convention, she’d be gone as leader. BDS is “polarizing and divisive,” May said, adding the Greens “should not have attached ourselves to a movement that’s outside of us as a party, over which we don’t have control.” She’s using her first holiday since Christmas to decide. “I don’t know which way it will go,” she told CBC.

This is no cliffhanger. May has nimbly paved a path to the decision Pierre Trudeau came to during his famous 1984 walk in the snow: to leave. May won’t be leaving politics, as Trudeau did; she has said she will remain MP for Saanich–Gulf Islands and run in the next election. Her party voluntarily wading into the quagmire of Israeli-Palestinian politics while oceans rise and polar caps melt gives May a conscience-based exit strategy from a job she’s had for 10 years, longer than any current federal party leader. She told the CBC the prospect of leaving is “heartbreaking”; “devastating” is the word she used with Rabble. Yet days before the national conference—which in classic don’t-look-at-us Green fashion was held the same weekend as the Olympics began—May expressed frustration to the Globe and Mail: “I don’t love being leader of the Green party,” she said, calling it “a thankless task devoid of any fun.”

That’s an understatement. Since it was founded in 1983, the Green Party of Canada has been riven by debate over whether it’s a social movement or a political party. May herself is emblematic of the divide: a former activist who staged a 17-day hunger strike on Parliament Hill in 2001 to draw attention to high cancer rates near Cape Breton’s Sydney Tar Ponds, she is also a canny backroom operative, evident in her years as senior policy adviser to environment minister Tom McMillan in the Mulroney government, a job she left for reasons of “conscience,” though the truth, as always, is more complex. May has always been driven by moral certitude, one that sees partisan goals as secondary to what she perceives as the greater good. It is a quality that has driven party strategists up the wall, seen in 2008 when May went up against Conservative Peter MacKay in the riding of Central Nova to garner media attention rather than secure a winnable seat. She was finally elected in 2011.

RELATED: What happened at the Green convention

The fact that May—whip-smart, a charismatic orator and media magnet—is an asset on the political stage is a given. She’s a stellar parliamentarian, has been a critic of both Conservative and Liberal environmental policies, led the charge against Bill C-51, the anti-terrorism bill, and marshalled Bill C-442, the National Lyme Disease Strategy Act.

That she’s an asset to the Greens is assumed, although the party’s popular vote in the last election (3.54 per cent) was lower than it was in 2006 (4.5 per cent); it hit an all-time high of 6.8 per cent in 2008. The Greens remain a one-woman show, with May the only elected MP. Expected youth support has never materialized; despite higher voter turnout among youth in the last election, Green support dropped substantially. Within the party there has long been grumbling about May’s autocratic style; her critics call her “E Me.” Still, they gave her a 94 per cent approval rating in a leadership review earlier this year. Not that another potential leader is waiting in the wings. “I am mentoring actively wonderful, wonderful people, many of whom will be good leaders,” May told the Globe. She’s hardly a recruitment poster: “It is not really something I’d recommend to a good friend,” she said.

May’s threatened departure, one some Greens have called “blackmail,” comes just as the country is finally, if reluctantly, discussing the electoral reform required for smaller parties like the Greens to gain political traction. Confoundingly, the party that should be leading discussion of the merits of proportional representation used a majority-rules system—the “first past the post” it so reviles—to vote for BDS. The process switched from consensus to Robert’s Rules of order for the convention, May said, adding that she wasn’t allowed speak prior to the vote, and was jeered when she tried. She maintains the vote doesn’t reflect the “genuine will” of its members. There will be an emergency meeting of the party council to discuss next steps, likely Aug. 21 or 22. Meanwhile, May appears to be distancing herself: “Being a good constituency MP has always been more important to me than scoring points in the partisan way for the Green party,” she told the CBC.

How this will play out isn’t complicated: if the Greens don’t dial back on BDS, May is gone. Given her history, there’s no way her conscience would permit her to remain with a party whose platform she can’t endorse. And that could lead to another walk, possibly in the direction of another political party. The parliamentary climate has changed. The threat posed by a Harper government that galvanized her to enter politics is gone. Her alliance with the Liberals, particularly Stéphane Dion, with whom she established electoral co-operation in 2008, much to her party’s chagrin, is long-standing; there was even chatter Justin Trudeau would name May environment minister. That didn’t happen, but May was part of the Canadian delegation at the Paris climate talks last fall. May’s walk might well end with her entering the very power nexus she excels in disrupting. If she does, at least she can tell herself her conscience is clear.